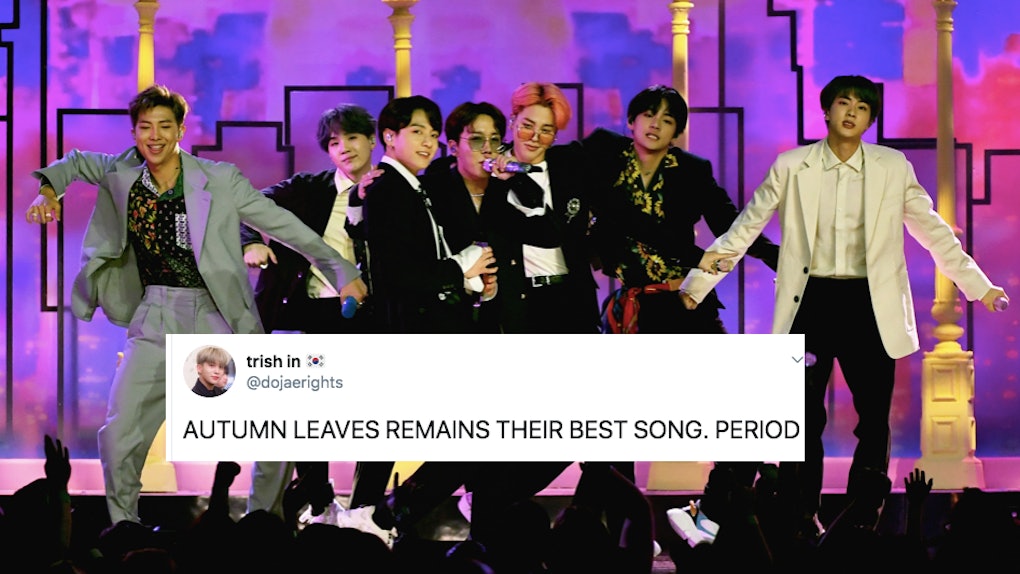 If you've been keeping up with BTS, you probably know that the boys have been working non-stop lately. After the release of their album Map of the Soul: Persona in April 2019, the K-Pop giants went on a world tour. BTS' last tour show was in Paris on June 8, and though the world tour doesn't continue until July 6, 2019 in Osaka, Japan, the boys haven't even taken a break. Instead, they've been busy performing during their fifth Muster in their home country of South Korea, which included some absolute gems like the BTS boys performing one of their songs a cappella. These videos of BTS singing "Autumn Leaves" a cappella at Muster will have you stanning RM, Jin, Suga, J-Hope, Jimin, V, and Jungkook so hard.

First, a little background about Musters. In case you don't know what a BTS Muster is, it's basically a concert where some ARMYs have the chance to meet the members of BTS and there's a setlist and performance specifically curated for the show, which includes older songs and fan faves. BTS' current Muster is taking place in Seoul at the Olympic Gymnastics Arena. Part one was over the weekend of June 15 in Busan, South Korea at the Busan Asiad Auxiliary Stadium, and part two began on Saturday, June 22.

One of the early highlights from weekend two of Muster was the boys doing an a cappella version of their song, "Autumn Leaves," which some fans also call "Dead Leaves," based on a translation from Korean. The tune is from their 2015 album called The Most Beautiful Moment in Life: Part 2. The lack of instrument accompaniment perfectly showcased their talent and the strength of their voices, and Twitter users were absolutely loving it. One Twitter user posted the video on June 22 and wrote, "[D]ead leaves didn’t come out so we got an [a cappella] version."

Another Twitter user, enthusiastically wrote, "DEAD LEAVES ACAPPELLA VERSION TO CLEAN YOUR TIMELINE AND SAVE Y'ALL FROM SINS AND SLAP ALL TOXICS OUT THERE."

Another fan loved the stripped-down version showing a softer side, writing, "Autumn Leaves a cappella version is cute af."

In another video, posted by Twitter user @bambikooks, you can hear ARMYs singing along with BTS' a cappella rendition. @bambikooks wrote, [BTS] and [ARMYs] always sound so good singing together."

Many people took to Twitter to talk about how "Autumn Leaves" is their absolute favorite BTS song, showing that the a cappella rendition of the song was the cherry on top of what would have already been an exciting performance for fans. Another Twitter user commented, "[D]ead leaves [a cappella] sounds incredible [I've] never wanted more [BTS] unplugged content in my life." Same, @abrndnewday. Same.

If you're not lucky enough to live in South Korea to attend one of these famous Musters, worry not because you can actually livestream day two of the final weekend of the 5th Muster on June 23. Plus, there's plenty of amazing new BTS material for international ARMYs too. For example, a brand new BTS song called "All Night" dropped on June 21, it features an RM and Suga collaboration with American artist Juice WRLD. During the second week of June, BTS released a Mura Masa-produced track featuring Zara Larson called "A Brand New Day."

With all this new material being created by the K-Pop group to delight ARMYs' ears — and all their continued stellar performances — I think it's safe to say 2019 will be the summer of BTS.