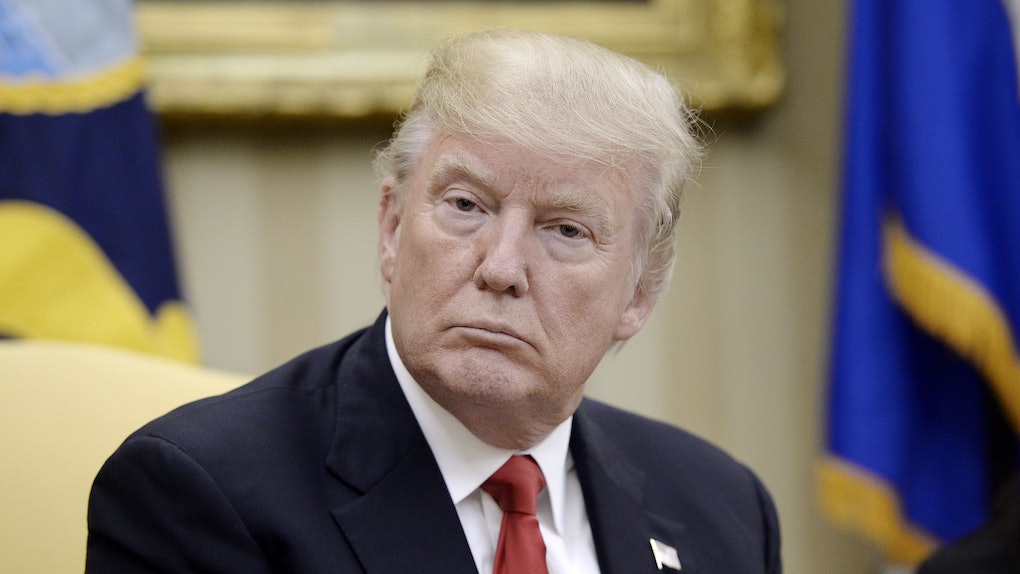 These Tweets About Donald Trump's 73rd Birthday Aren't All Celebratory

Happy birthday, Mr. President! June 14 is President Donald Trump's birthday, and you know what that means: Cake and ice cream, and that people have taken to Twitter to comment on his big day. But as you can probably expect, these tweets about Donald Trump's 73rd birthday aren't all celebratory. In fact, some are petty AF and downright shady.

It all started after Andy Lassner, the executive producer of The Ellen DeGeneres Show, suggested on the morning of Friday, June 14 that Twitter users honor Trump's birthday by celebrating the late Sen. John McCain (R-Arizona). "Honoring an American hero today. ...I’m sure this would mean a lot to patriot like Donald Trump. #JohnMcCainDay," Lassner wrote. What makes this so shady (in case you don't already know) is that Trump isn't exactly a fan of McCain, who died of brain cancer in 2018. During his last years, Trump frequently criticized the senator and has continued to do so even after his death. So it seems pretty likely that Trump wouldn't want to share his big day with McCain.

That didn't stop people from adhering to Lassner's call, though. There seem to be tens of thousands of tweets in the Twitterverse celebrating McCain. Check out a few of them below.

"Take a moment today to remember a true American hero," one person tweeted.

"I can think of nothing else or anyone else more worthy of being celebrated today," another added.

Well, it seems like some people have picked a side between the two. But I can't guarantee that Trump isn't going to use his Twitter fingers to issue a fiery response to all of this.

Trump and McCain's feud dates back years, starting in 2015 when Trump, who received several draft deferments during the Vietnam War, including one for bone spurs, criticized McCain's military record. "He's not a war hero. He's a war hero because he was captured. I like people that weren't captured," he said during a rally, according to The New York Times. McCain spent more than five years in captivity as a prisoner of war in North Vietnam after his plane was shot down in 1967.

Over the next few years, the two regularly tossed barbs at each other. When McCain died in August 2018, one might have guessed that the drama was over — especially because Trump had shared some kind words about the matter on Twitter. But in March 2019, he pulled the gloves off again while speaking to reporters in an Oval Office meeting. “I was never a fan of John McCain, and I never will be,” Trump said, per The Hill. He then called McCain's 2017 vote against repealing the Affordable Care Act (ACA), also known as Obamacare, "disgraceful."

“He campaigned on repealing and replacing Obamacare for years and then he got to a vote and he said ‘thumbs down,’” Trump continued. “I think that's disgraceful, plus there are other things.”

Now that Twitter has made his big day about one of his biggest rivals, I'm sure Trump is likely just as upset. But... do you, Twitter. You always do.