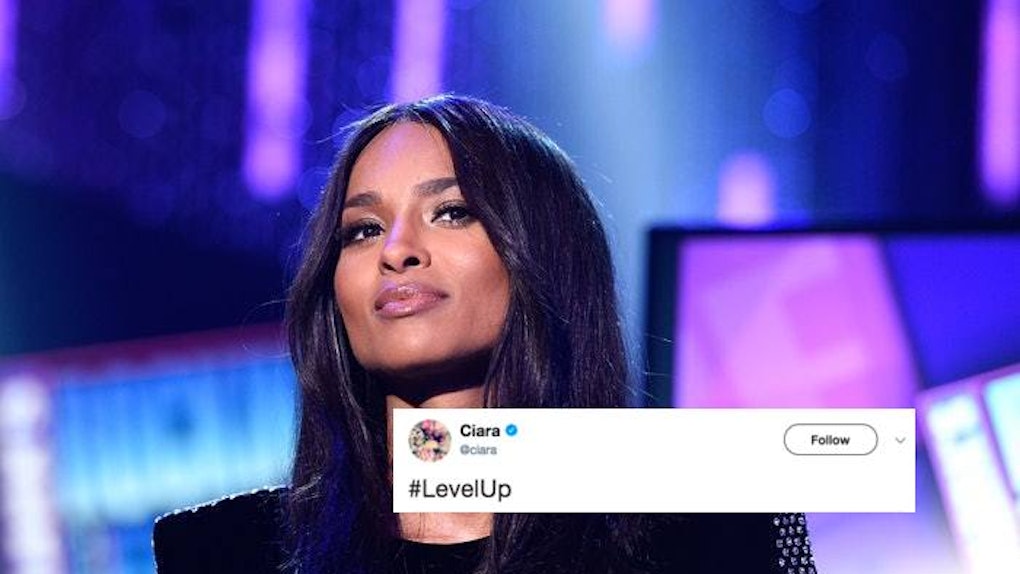 As someone who grinded for the first time at 13 years old to "1, 2 Step," I'll always have a special place in my heart for Ciara. To this day, nothing picks up my mood more quickly than applying lip gloss while listening to "Oh" on repeat. The woman undeniably knows how to make a banger. But a questionable video she reposted on her Twitter has the world thinking her ability to dish out marriage advice isn't quite as spot on as her ability to make a great song. Ciara's reposted "Level Up" video about marriage involves Pastor John Gray giving a speech addressed to the women in his congregation, who worry that, despite worshipping Jesus regularly, they still haven't managed to find a husband.

In the video, he shared this piece of "wisdom" with them that he claims is based on the teachings of the Bible:

Here's what the scripture says: He that finds a wife finds a good thing. It didn't say he that finds a girl that he's attracted to, who he then begins to date, who he then calls his girlfriend, who he then buys a ring, proposes, and makes her his fiancee, who he then marries later, who becomes his wife. You're not a wife when I marry you; you're a wife when I find you. You become my wife when I marry you, but a wife is not the presence of a ring; it's the presence of your character. Too many women want to be married, but you're walking in the spirit of girlfriend. Ask the Lord to deliver you from that spirit and carry yourself like you're already taken, and I promise you: When you carry yourself like a wife, a husband will find you.

To a lot of modern women, the fact that he just reduced us to "girlfriends" and "wives," waiting to be chosen by "husbands" is pretty offensive, but apparently, the speech really resonated with Ciara — so much so that she reposted it on her Twitter account with the caption "#LevelUp."

Her reposting of this pretty sexist message wasn't received well by other women on Twitter, who were very quick to call her out.

Renowned feminist and author Roxane Gay called her out with two simple words.

CiCi Adams, a writer and proud follower of Christ herself, called Ciara out for adhering to this faulty interpretation of scripture.

If people were giving the same advice to men, this wouldn't be quite as bad. But alas.

Even some men understand what was wrong about the advice.

In response to all of the backlash, Ciara posted screenshot of a note on her Twitter, in which she tried to give people a little more background on where she was coming from:

I was once that girl wanting to be loved a certain way but was making the wrong choices. I found myself at my lowest moment. I was a single mom sitting at home, and I then realized that the perfect love I was looking for was how God loves me, how He wants me to be loved, and who He was calling me to be as a mom and as a woman. That's when I realized married or not married... I needed to love myself. #LevelUp.

Despite all of the hate, Ciara did have some people who stepped forward to support her decision to post the video.

They're praising her for acknowledging her own self-worth.

Whether or not you agree with Ciara's stance, it's clear that perpetuating a message that women are the ones who shoulder the burden of finding and keeping a happy marriage isn't a good look.

First, not every single woman out there is desperate to find a life partner — or a partner at all for that matter. Second, a woman should not be reduced to a "girlfriend" or a "wife." Every woman is a complex being, perfect in their own way. It's not up to you to change yourself for someone to love you. Someone should and will love you just as you are. It's important for young girls to have positive female role models who are encouraging them to be whatever they want to be, not just wives or girlfriends. So let's all #LevelUp to that, instead of leveling up to being a wife.

More like this
Zac Clark & Tayshia Adams Are Wedding Planning & I’m So Pumped
By Lydia Wang
When Are Ariana Grande & Dalton Gomez Getting Married? Here's The Reported Tea
By Corinne Sullivan
Justin Bieber's Quote About His First Year Of Marriage To Hailey Baldwin Is Unexpected
By Corinne Sullivan
Stay up to date