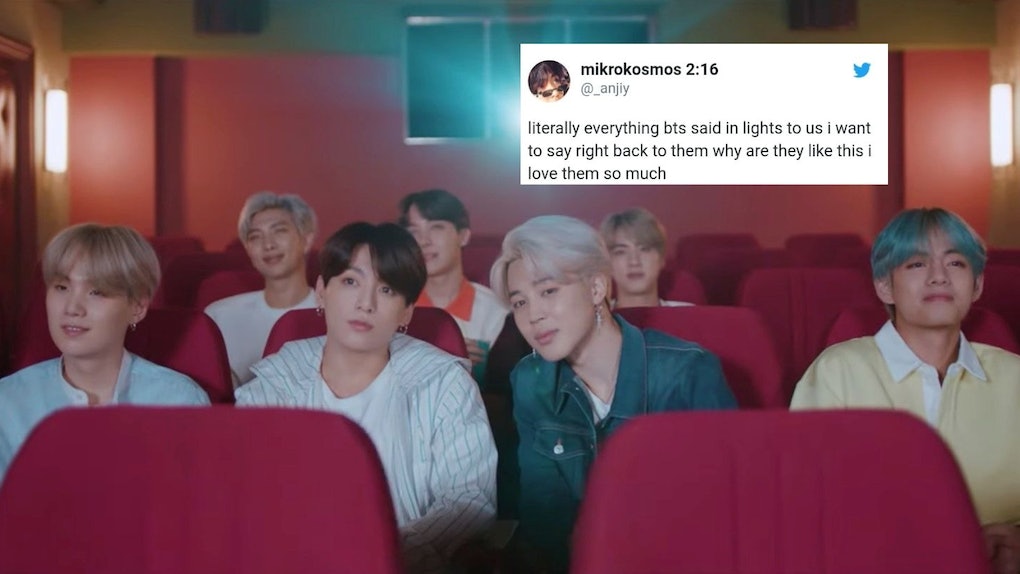 These Tweets About BTS' "Lights" Will Brighten Your Day

That's what, like five singles in less than a month? Ddaeng. See what I did there? (I'm sorry, I just had to do that at least once.) It all started on Friday, June 7, when BTS released their single with Charli XCX, titled "Dream Glow." Since then, it has been single after single after single. After "Dream Glow," there was the collaboration with Zara Larsson for "A Brand New Day," the collaboration with Juice WRLD for "All Night," and then there was the super amazing OT7 single "Heartbeat." All four tracks were released as part of the BTS World: Original Soundtrack to get fans hyped for the group's BTS World mobile game. Although the songs have only been out for a short time, BTS has already moved on to their next release: "Lights." The song is performed in Japanese by BTS and it sounds so beautiful. These tweets about BTS' "Lights" agree with me.

There's something different about BTS' Japanese singles that pull at your heartstrings. "For You" was such a sweet track about being involved in a long-distance relationship, while "Crystal Snow" talked about appreciating love for as long as you have it. BTS' "Lights" is equally as emotional, since it's about having a love so strong that even when you're not with that person, they never really leave your side because they are always in your thoughts.

The BTS ARMY has known about the single's release since May, but that doesn't mean they were prepared for when the single actually dropped. Fans first got a taste of the song's message on May 9, when Variety reported that BTS would be releasing the Japanese-language single "Lights," which “conveys the message of hope that one can connect with the others through sounds and see each other’s lights whenever they close their eyes.”

Typical of BTS, and by that, I mean that the group is always including important messages in their songs that inspire their fans. A clear example of this was when BTS released their Love Yourself album series, which had themes about self-love and acceptance. "Love Yourself" has become somewhat of a mantra for BTS fans as a reminder to love themselves a bit more day by day. Wow, I get emotional just thinking about it. BTS loves their ARMY and is always sending them words of wisdom through their music.

Clearly, the BTS ARMY is head over heels over "Lights" and their tweets show it.

See what I mean? Fans adore BTS and every song they release. I mean, it's kind of hard not to, since the group is constantly releasing good music. There hasn't been one BTS song I haven't totally loved.

OK, enough of that. In case you haven't had the chance of listening to the new song yet, you can stream it below on Spotify,

Oh, and if that wasn't enough, BTS released the music video for "Lights," too. Yeah, BTS always seems to do that, but hey, I ain't complaining.

You can watch the music video for "Lights" below.

A visual masterpiece. BTS looked so happy in the video, which made me happy, too. That's just the effect BTS has on people. And how cute was it that they were watching themselves in the movie theater?

So, what now? Well, BTS is releasing yet another feature film soon. Bring The Soul: The Movie will be hitting theaters on August 7. It's going to be huge, so I suggest you pre-order your tickets now. Yeah, that's happening. You didn't think BTS was on break now, did you? Didn't think so. These guys are always hard at work!