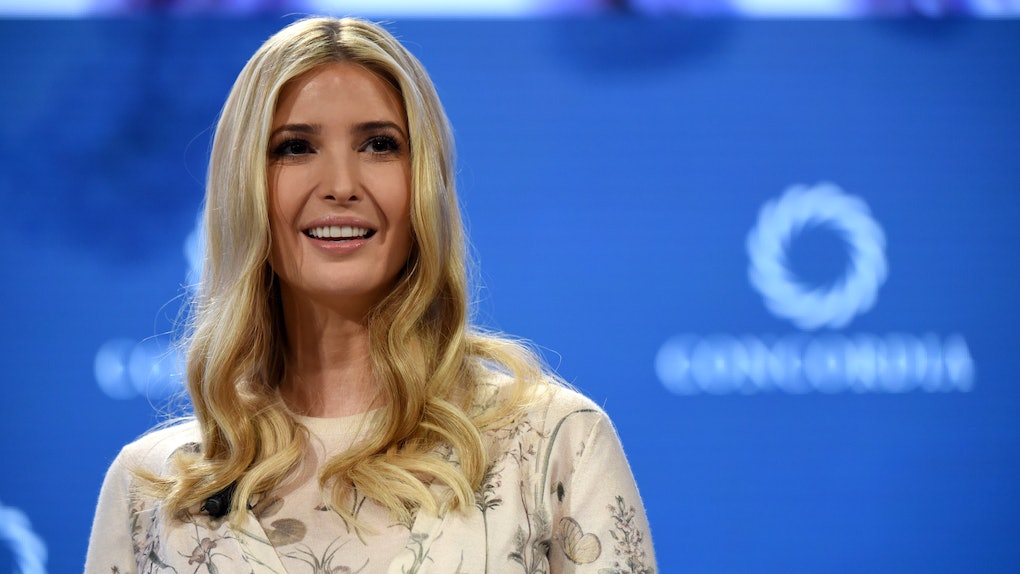 These Throwback Photos Of Ivanka Trump Are So '90s It Hurts

Even before our 45th president stepped foot in the White House, the Trumps were a famous family. With now-President Donald Trump being New York's quintessential real estate mogul, the light has always shone bright on them. But out of the Trump children, that spotlight maybe shone brightest on eldest daughter Ivanka Trump, who is always by her father's side. Which is to our benefit, because these throwback photos of Ivanka Trump are bringing some major '90s nostalgia.

Considering the family fame, it's unsurprising that the first daughter has a storied timeline of throwback photos. Nestled among Trump's numerous Instagram posts from the White House, where she serves as adviser to the president, are quite a few throwback snaps. Over the years, the first daughter has filled a good chunk of her feed with back-in-the-day pics of herself and her family, as well as quite a few from her modeling days. Most of her throwback photos, though, are of her posing with her dad or mom Ivana Trump, the president's first wife. All the old photos make it look like she had a really good relationship with her parents growing up, which is not that surprising considering how close she and her father are now — he even gave her a job in the White House, after all. I have to say, fan of Trump or not, some of these pics are really pretty adorable. Especially some very-'90s modeling shots. Ah, nostalgia.

OK, OK, this one might be '80s, but those barrettes just scream "nostalgia" to me. Trump's most recent throwback was actually a happy birthday post to her father, and honestly it's pretty cute. On June 14, Trump posted a slideshow of photos of herself and her dad. The first one is the two of them at what appears to be a birthday party (for kids, in this instance). Little Trump is decked out in a pink dress with a pink bow in her hair, and President Trump is leaned in for the picture. The next couple of slides feature herself and her brothers, Eric Trump and Donald Trump Jr. with their father. The last shot in the slide is a slightly older, pre-teen looking Trump walking down a baseball field with her father. The caption read "Happy birthday Dad! I love you very much. Wishing you your best year yet!!!

In June 2016, before President Trump was even elected, Trump posted another birthday message for her dad, in which she looks somewhere around 8 years old. This time it was a black-and-white version of a photo of a young Trump and the soon-to-be president decked out in a tuxedo, attending the Maybelline Look Of The Year event at the Plaza Hotel back in 1991. "Happy birthday to my amazing father and first mentor! I still learn from you daily and love you dearly," she wrote. Is it just me, or are you dying to know what they're looking at just out of the frame? Just me? OK.

All Dolled Up With Mom

Not all of the throwback photos are from Instagram, quite a few of them are floating around the Internet to remind us of what the eldest Trump daughter was like as a young girl. Judging by all the pics of Trump and her mom, Ivana Trump, it's clear that they've always been pretty close. Judging by this photo, it looks like they even "partied" together back in the day. This photo was taken on New Year's Day in 1995, which means Trump was 14 years old and living her best life in some '90s florals. I gotta say, I'm loving Ivana's peak '90s purple suit even more.

Did you forget about that hot second in the late '90s when Ivanka Trump was a proud brunette? While it's true that most throwback photos of the eldest Trump daughter feature her with her family, there's also a few of her teenage years as what I want to call a "socialite" getting down around the world. Here's Trump in a nightclub in Sydney, Australia in 1999 — making her around 18 years old. Soon she'd be off to college at Georgetown University in 2000 and then later to the University of Pennsylvania, where she graduated from their Wharton business school in 2004.

But before all that Ivy League education, there was a shiny blue bandana top. I completely forgot those were a thing in the '90s, and do I, like, want to bring them back?

Also, super important question, is this the origin of the duck face?

On The Runway, Work!

Some of you might have forgotten, but Trump actually spent some of her teenage years as a model. In the nineties she was big on the scene and walked the runway for some A-list designers like Jill Stuart, Paco Rabanne, and Vivienne Westwood. In this floral vacation-inspiring look, a young Trump was walking for Enrico Coveri in Milan, Italy.

Trump is in the spotlight a lot now with her White House status, and it's almost easy to forget that she had a whole other life before her father walked into the Oval Office. Thankfully, photos are forever.