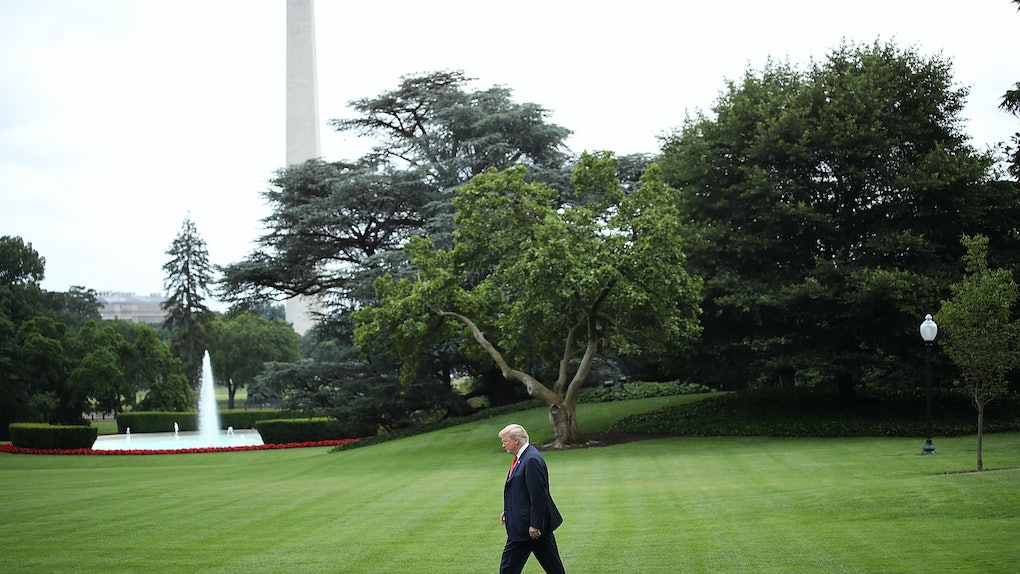 In case you forgot, Donald Trump isn't only the current president, he's also a well known reality television star. There's no denying that Trump is by the far the most unconventional president in history, and these photos of Trump meeting celebrities is further proof of that. This year just keeps getting stranger and stranger.

Celebrity and presidential meetings aren't uncommon occurrences throughout history, but Donald Trump's case might be a bit unique. Trump may be known today as the President of the United States, but rewind to a few years ago and you would have only known him as a businessman and host of reality television show The Apprentice. Trump is no stranger to the big screen, and through his stardom he's certainly had his fair share of celebrity run-ins. Now, as president, he's still meeting stars, but there might be a bit more tension than when it was just a friendly chat. His controversial policies, such as separating immigrant children from their families at the border and withdrawing from the Paris Climate Accord agreement have led many celebrities to speak against him and his administration online, but how do Donald Trump's face to face meetings with these stars compare to past presidents? Well, just look and see.

In April 2017, members of the New England Patriots visited the White House to celebrate their Super Bowl victory, but was a number of familiar faces missing. Even though the team invited all 68 players to attend the visit in Washington, D.C., only half of them actually showed up. This may come as little surprise to some, especially since Donald Trump is arguably the most controversial president in history, and has openly condemned the string of NFL protests that occurred throughout the season. Despite the controversy, Donald Trump did receive his own jersey and helmet, but Patriots owner Robert Kraft decided to up the ante by giving the president his own Super Bowl ring as well. Needless to say, that probably makes up for the low attendance.

The New England Patriots aren't strangers to Super Bowl victories, and so they're certainly not strangers to the occasional White House visit. In April 2015, the NFL team visited the White House to celebrate another Super Bowl win. Although quarterback Tom Brady chose not to attend the get together, the South Lawn was still filled with members of the team. During the event, Patriots' owner Robert Kraft gave Barack Obama his own personal football and helmet on behalf of the team.

In July 2018, Donald Trump made his first visit to Windsor Castle as president to meet Queen Elizabeth herself. Even though the meeting appeared to go smoothly, Donald Trump's overseas tour didn't exactly consist of a warm welcoming committee. Even before Donald Trump landed in the U.K., a string of protests erupted across London opposing Trump's visit across the pond, and there were rumors that members of the royal family had declined to welcome Trump in person (a Buckingham Palace spokesperson tells Elite Daily in a statement that there was "never a suggestion" for Trump to meet with other royals). Despite the less than warm welcome, Queen Elizabeth greeted Donald Trump with a handshake, and the two enjoyed a nice, but slightly awkward, walk down the Windsor Castle grounds.

In May 2007, former president George W. Bush invited Queen Elizabeth and Prince Phillip to the White House for an extravagant, and playful banquet. Although it was a formal event, Bush entertained the audience, and the Queen, with jokes and amusing comments. Like Trump, though, Bush hasn't had the best luck with visits across the pond. While visiting the Queen in the U.K. in 2003, Londoners came together to protest the Iraq war. Despite the controversy surrounding Bush, Queen Elizabeth didn't let that faze her relationship with the former president.

Arguably the most iconic, and controversial, celebrity-presidential face to face in history, Kanye West met with Donald Trump at Trump Tower in August 2016. According to West, he met with Trump in order to discuss a way to stop violence in his hometown of Chicago, IL and other "multicultural issues." Although the chat seemed civil enough, the photos of the two together appeared tense and a bit awkward. Plus, it's pretty unconventional that a president would meet with a celebrity in their personal New York skyscraper.... but Trump has never claimed to be a conventional president.

Kanye's not the only member of the West-Kardashian clan to meet with Trump. If you thought the president's meeting with West meeting signified the strangest interaction in presidential history, remember this one happened too. In May, Kim Kardashian-West met with Donald Trump in the White House Oval Office for a very important reason, and of course a historic photo op. That day, Kardashian-West met with Trump to ask him to pardon Alice Marie Johnson, a 63-year-old woman who is serving a life sentence in federal prison for a drug-related crime. After the meeting, Trump took to Twitter to share a photo of him and Kardashian-West's meeting. Safe to say, it looks just as tense as his exchange with her husband, Kanye West.

While Obama definitely made his opinion of Kanye West known during his presidency (and it wasn't very nice), that's not to say he didn't have his own superstar connections. Just take January 2013 as an example, where absolute superstar (and overall queen) Beyoncé Knowles performed the "Star Spangled Banner" at Barack Obama's second inauguration ceremony.

While the performance itself was clearly a historic moment, it's the interaction between Obama and Knowles in that photo of the moment after the performance that speaks volumes. Not only are the two grasping hands tightly, but the big smile on Knowles' face is proof that there's nothing but respect between these two.

So there you have it. Donald Trump may have a history of meeting celebrities, but things have definitely shifted since he became president.

More like this
Why Don't I Have TikTok's "Celebrity" Shapeshifting Filter? It Depends On This 1 Thing
By Lara Walsh
These National Pet Day 2021 Tweets Are Filled With The Cutest Dog & Cat Photos
By Daffany Chan
These Photos From Prince Philip's Funeral Capture The Most Touching Moments
By Sydney N. Sweeney and Cianna Garrison
Stay up to date