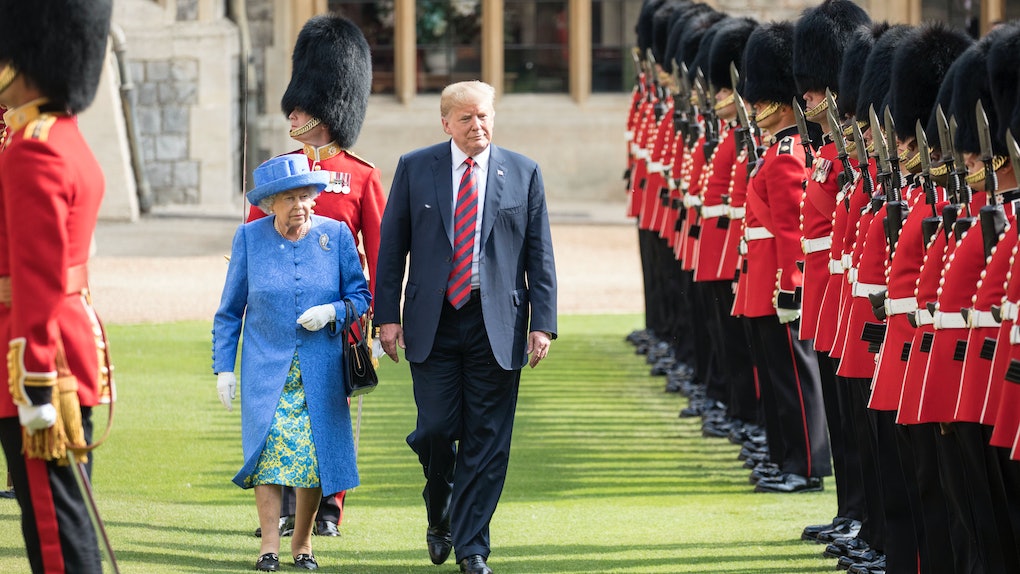 On July 13, Donald Trump met with Queen Elizabeth during his two-day visit to the United Kingdom. Even though a meeting between these two world leaders are not uncommon, what is different is that the British monarch led this meeting solo. So, why did Queen Elizabeth meet Donald Trump alone? Apparently at least two royals just weren't feeling it.

UPDATE: A Buckingham Palace spokesperson tells Elite Daily by email that there was never a plan for other members of the royal family to meet with the Trumps during their visit. "In line with standard practice for guest of government visits the President and First Lady were received by The Queen as Head of State. The arrangements were mutually agreed between the Palace and the UK and US governments," the statement reads.

EARLIER: On July 15, U.K. publication The Sunday Times reported that the reason why Queen Elizabeth had her meeting with Donald Trump alone is because Prince Charles and Prince William, the two heirs next in line to the throne, reportedly didn't want to meet Trump. Elite Daily reached out to royal family representatives for comment about why Prince Charles and Prince William did not meet Trump, but did not hear back by the time of publication.

According toThe Sunday Times, the two royals reportedly made it clear that they were not interested in meeting Trump during the days leading up to his visit. In addition a source spoke to The Daily Beast about how it was "strange" that Queen Elizabeth met with Trump alone, and revealed the reason is due to Prince Charles and William's "snub."

"They simply refused to attend," the source told Daily Beast. "It’s a very, very unusual thing for the Queen to be there on her own. Usually she is accompanied by somebody."

So what were these royals doing besides meeting with the president? Prince William chose to play in a charity polo match while Prince Charles attended an event that honored the police service. Even though it may be uncommon for the Queen to handle these meetings alone, leave it to British longest reigning monarch to pull it off without any backup.

Although Prince William and Prince Charles both had solid excuses as to why they couldn't attend the meeting, let's not forget that both royals seem to get along quite well with Barack and Michelle Obama. Especially since the Obamas gave Prince William and Kate Middleton's son, George, a birthday present during their April 2016 visit to the United Kingdom.

Despite Prince Charles and William's reported "snub," Trump and Queen Elizabeth's Friday the 13th meeting wasn't quite as unlucky as some might have assumed. The two powers, along with first lady Melania Trump, met at Windsor Castle in Windsor, U.K. to enjoy a lovely day on the grounds. Even though Trump's arrival didn't qualify as a "state" visit, his meeting with Queen Elizabeth represents a long-standing tradition between the two nations. According to Time, Queen Elizabeth has met with every U.S. president since 1951, excluding Lyndon B. Johnson.

This two-day affair represented Trump's first U.K. trip as president, and it was a historic get together. Although there was already tension leading up to Trump's visit, such as the protests erupting around London, Queen Elizabeth welcomed Donald Trump with a warm smile and sincere handshake. However, things took a slightly awkward turn a few moments later. While walking alongside the Queen on the Windsor Castle grounds, Queen Elizabeth instructed Donald Trump to walk alongside her, but instead Trump walked in front of Queen Elizabeth and completely blocked her line of sight. As a result, the Queen was forced to awkwardly shuffle her way back to Trump's side.

Elite Daily spoke to body language expert Dr. Lillian Glass at the time to hear her thoughts about the strange interaction. According to Dr. Glass, Donald Trump and Queen Elizabeth looked like they were in a Saturday Night Live skit while (attempting) to walk along the Windsor grounds.

"He doesn't follow her direction, he's beating to his own drum," Glass says. "He's looking around for the queen and he's — I mean, this looks like a skit from Saturday Night Live."

Despite a few awkward missteps, it looks like Donald Trump is in Queen Elizabeth's good books. Let's see if he'll charm his way into Prince William's and Charles' one day.