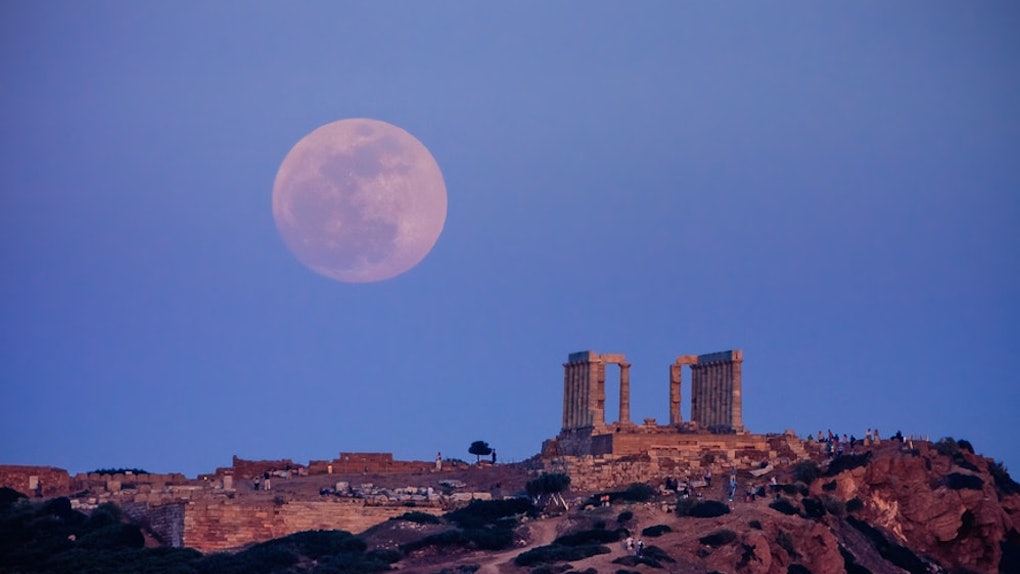 As someone who basically grew up smack dab in the middle of the woods, I am (and always will be) madly in love with the moon. Whether it's shining big and bright in the middle of the night, or if it takes form as a mere sliver in the light of day, I seriously can't help but love the feeling of its glorious and mysterious presence. If you're also a total moon child, here are photos of the blue moon on March 31. It was an absolutely gorgeous sight to see.

Next to corgis, blue moons happen to be one of my preferred natural phenomenons. While you probably think a blue moon means that the color of the moon is tinted blue, it's actually not. A blue moon occurs when there's a second full moon in the month. While a blue moon did already happen earlier this year in January 2018, they usually only come around about every 2.7 years, and the next one isn't until 2020. So if you unfortunately missed its peak, definitely make a point to check out the photos from the blue moon on March 31. Based on the pictures, it appears to have been an absolutely spectacular sight to see.

Even though the March 31 blue moon looks hella dope, it might bring about some negative feelings. The full moon tends to bring the body and soul closer together, which can feel incredibly unifying, but also super confusing. To combat the bizarreness of it all, it's important to embrace the connection between your soul and its primal needs, and to reveal all hidden, pure aspects of your personality. The blue moon can make you feel extra critical and desperate for approval. It can also give you a desire to balance out every single relationship in your life. While the blue moon can bring hardship, it can also provide time to soul search, which isn't the worst thing ever.

If you're feeling extra spiritual, you should try out a few rituals for the march 2018 blue moon. You can perform rituals to spread happiness, find inner beauty, or even attract healthy relationships. Most of them involve various types of essential oils, candles, and possibly even crystals and chants. While they seem pretty easy, they might be worth doing. You never know what fortune might come along with a blue moon, you know?

The March 2018 blue moon will supposedly affect each of the zodiacs in various ways. As a Cancer, I am about to feel hella homesick — so the answer to all of my worries lies in visiting home, maybe hanging out with my parents and childhood friends, and just straight up reveling in all of the love. Honestly, I am totally cool with that. Just make sure to check out what your zodiac sign says for the blue moon, because it could actually help tend to your needs. You might ultimately be able to figure out all of life's problems.

If you haven't already caught a glimpse of the March 2018 blue moon, you still might be able to catch it later when it rises. Regardless, make a point to figure out when you'll be able to see it best, which is completely based on your location. Regardless, the photos already captured from around the world are totally spectacular — and even though the next one isn't until 2020, I am quite literally counting down the days until the next one. Hopefully the moon won't affect your mood too drastically, but either way, it's bound to be a beautiful and absolutely breathtaking sight to see.

More like this
These TikTok Starbucks Drinks Include Barista Creations Like A Churro Frappuccino
By Cianna Garrison
These Unique Gifts For Moms Are A Change Of Pace From A Bouquet Of Flowers
By Cianna Garrison
April 19, 2021 Will Be The Best Week For These Zodiac Signs
By Roya Backlund
Stay up to date