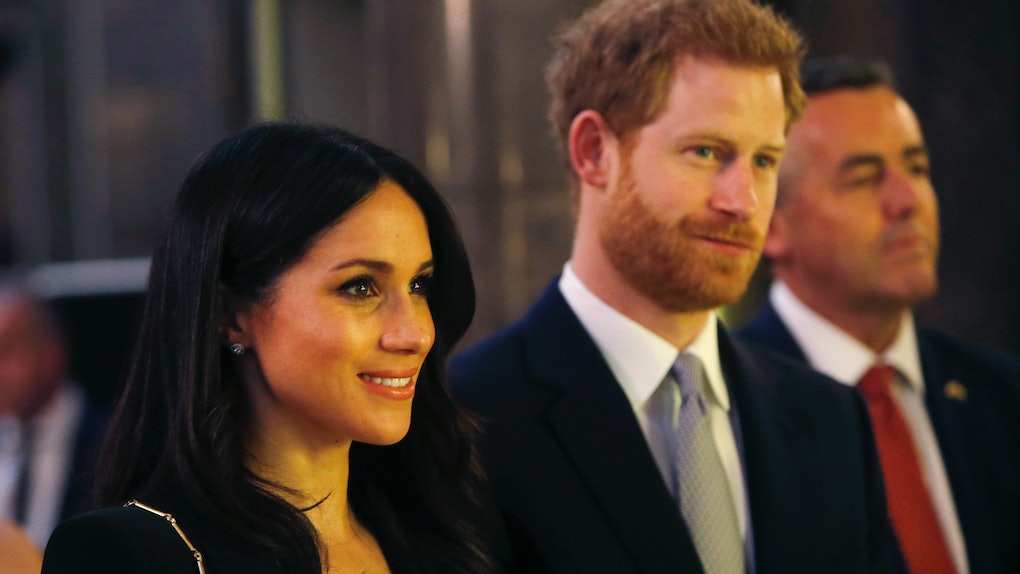 Prince Harry just became an uncle to a third royal baby on the morning of April 23, but he and Meghan Markle spent the weekend partying it up with Queen Elizabeth. OK, not partying in the context that we would imagine it, but she did have a birthday party this weekend and Harry and Meghan did attend. And the photos of Meghan Markle and Prince Harry at Queen Elizabeth's birthday party are adorable as hell, as they not only give us more pics of the soon-to-be newlyweds together, but they also give us more pictures of Markle with the various members of the royal family.

The couple arrived to the event (officially called The Queen's Birthday Party) wearing matching outfits, and although I doubt the matching was planned, I'm living for it. They each wore navy blue and slayed the looks. The party was a star-studded concert held at the Royal Albert Hall on Saturday, April 21. Little did they all know that a new member of the family would be joining their ranks just two days later! Kate Middleton gave birth to a baby boy on Monday, April 23, and she wasn't at the party likely because she was so close to her due date.

Prince William did attend, though, and they looked like they were having a grand old time. Royal family bonding!

Here are Harry and Meghan walkin' to the club looking extra fly.

The concert, according to E! News, featured performances from Shawn Mendes, Sting, Kylie Minogue, Tom Jones, Shaggy, and more, and you can bet your ass I had a good laugh at the thought of Shaggy performing "It Wasn't Me" at the literal queen of England's birthday party.

Harry: "OK, who told my grandma about Shaggy?" Meghan: "It wasn't me."

Shaggy didn't perform "It Wasn't Me," unfortunately. (Could you imagine the memes if he did?) He and Sting performed "Don't Make Me Wait" from their collaboration album 44/876 (an album that I surprisingly do not hate), and Shaggy also performed "Mr. Boombastic," which apparently made Harry and Meghan crack up. Honestly, fair. Shawn Mendes performed his new single "In My Blood," Kylie Minogue slayed, and the night was great all around. Harry also took the stage to share some kind words about his grandma, and he naturally opened with a joke. "Tonight we are celebrating the queen's birthday," Harry said. "But your majesty, if you do not mind me saying, you are not someone who is easy to buy gifts for." Harry's got jokes!

Harry and Meghan spent the concert with various members of the royal family.

Some of the royal guests included Prince Charles and Camilla (the Duchess of Cornwall), Princess Eugenie (who got engaged not long after Harry and Meghan), Princess Anne (William and Harry's aunt), and more. Queen Elizabeth, along with other members of the royal family and some of the night's performers, took to the stage at the end of the concert to close out the night.

Queen Elizabeth: "Thank you all for coming to my birthday party, but I'm honestly very upset Shaggy didn't perform 'It Wasn't Me.'" JK.

Just two days later, the family welcomed a baby boy into the world! Kate Middleton gave birth to a baby boy on the morning of Monday, April 23. Kensington Palace announced the birth of the prince on Twitter and in a follow-up tweet said the queen and the rest of the royal family are "delighted" about the news. The tweet said, "The Queen, The Duke of Edinburgh, The Prince of Wales, The Duchess of Cornwall, Prince Harry and members of both families have been informed and are delighted with the news." I'd say another great-grandchild is an excellent belated birthday present!

More like this
Meghan & Harry's Birthday Gift To The Queen Was Simple, But Thoughtful
By Michele Mendez
Meghan Markle's 'The Bench' Children's Book Was Inspired By Prince Harry In The Sweetest Way
By Sydney N. Sweeney
Kim Kardashian's Response To Claims She Smuggled An Ancient Sculpture Is A Lot To Take In
By Brandy Robidoux
Stay up to date