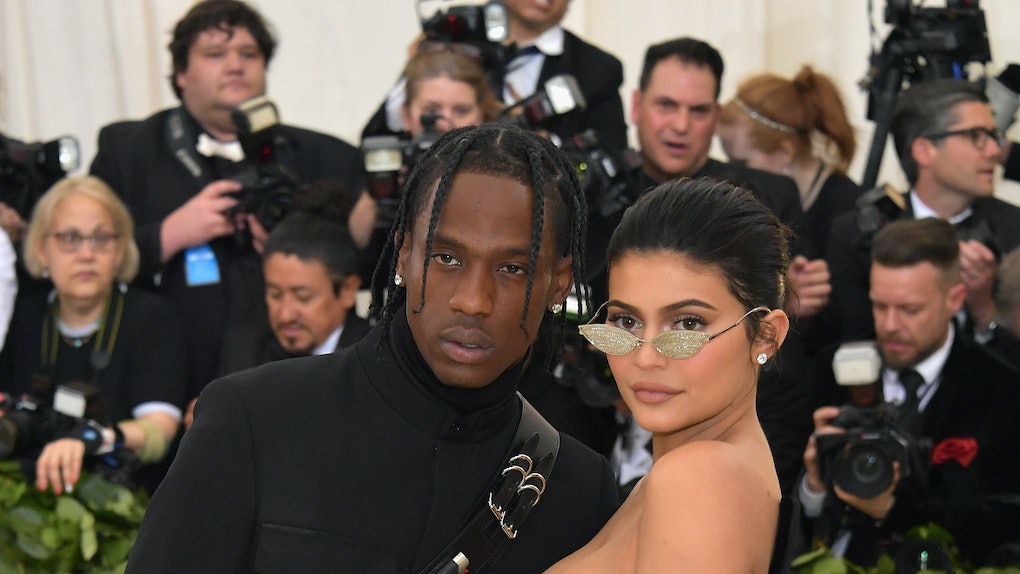 The big night is here, everyone, and sports fans around the country are tuning in to Super Bowl LIII and rooting for their favorite players. If you're more of a music buff than a football fan, then you probably only had your eyes peeled for the halftime show performers. In case you're wondering, those artists included Maroon 5, Big Boi, and Travis Scott. Performing at the Super Bowl is, like, a huge deal, so I'm assuming that those artists' family and friends were on the sidelines cheering them on. Based off of these photos of Kylie Jenner and Travis Scott at the Super Bowl, my assumptions were correct.

As you probably know, Kylie Jenner and Travis Scott are basically the cutest couples on the internet RN. Between swoon-worthy posts about each other and photos of their daughter, Stormi (whose birth was confirmed right before the Super Bowl in 2018), they're basically the "it" couple of this generation. Therefore, it's no surprise that Jenner is at the Super Bowl supporting her boo.

If you're watching the game live, you might've already seen the couple make their Super Bowl appearance. And if you didn't, that's OK because they're pretty low-key anyway. Scott actually posted this photo of Jenner to his Instagram Story:

So, Jenner was there to support her love! Their daughter, Stormi, was being supportive as well as she watched her dad on TV during his performance:

And on Saturday, Feb. 2, Jenner shared this lovey-dovey photo of the two of them:

Yup, it's obvious that those two are madly in love. In fact, throughout the weeks leading up to the Super Bowl, tons of fans thought that Scott was going to propose to Jenner during the big game. Taking all factors into consideration, the idea of a Super Bowl proposal between the two of them doesn't seem too far-fetched, either. In fact, Scott has already spoken publicly about making Jenner his wife — so it's just a matter of time.

Back in December 2018, Scott spoke with Rolling Stone about his love life (and rapping career, of course). During the interview, he talked about how his and Jenner's relationship escalated to the point where he now "needs" her. He told the publication, "We’ll get married soon. I just gotta sturdy up — I gotta propose in a fire way."

Of course, fans came to the conclusion that the most "fire" way to propose to Jenner would be during the Super Bowl. I mean, he did perform during the halftime show, and that in itself is a pretty epic moment. Could you imagine proposing to your bae on the same night? It'd be the engagement of a lifetime. Though, with the clock winding down on the big game, it looks like a Super Bowl proposal was never in the cards.

Now, I know what some of you might be thinking: "Aren't Scott and Jenner already married?" The answer is no, but it was easy to make that mistake when Jenner called Scott her "husband" on Instagram in January. Yes, it's true: Jenner posted a photo of herself with the caption, "extraño a mi esposo." When translated to English, the caption reads, "I miss my husband." Sigh, I hope they tie the knot soon.

More like this
Lamar Odom's Quotes About The Kardashian Family Curse Do Not Hold Back
By Brandy Robidoux
Prince Philip, The Duke of Edinburgh, Has Died At The Age Of 99
By Noelle Devoe
Here's Why EXO's BAEKHYUN, CHANGMO, & Raiden's "Runner" Is The Perfect T1 Theme Song – EXCLUSIVE
By Michele Mendez
Stay up to date