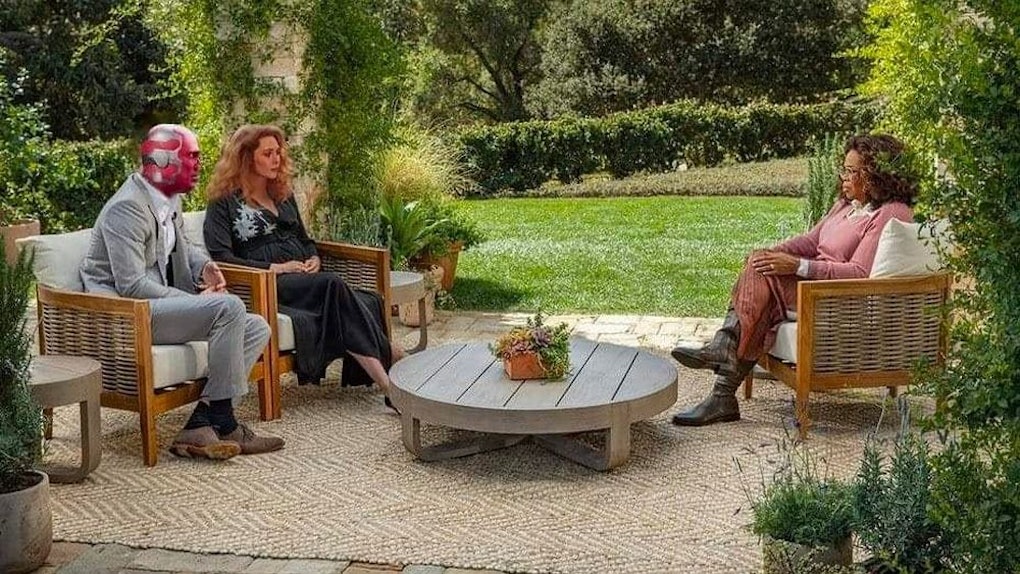 The best memes are crossover memes, when one cultural phenomenon runs smack into another by sheer happenstance of timing and audiences can't help but connect them. Such was the case with Disney+'s WandaVision and CBS' Oprah With Meghan and Harry: A CBS Primetime Special. The former concluded on Friday, March 5, and the latter aired on Sunday, March 7. The collision of the two big entertainment moments in one weekend meant memes of Oprah interviewing Wanda and Vision were inevitable.

The crossover felt especially natural because the WandaVision finale left tons of loose ends for fans to ponder. Although the show was really about Wanda finding a way to let go of Vision and say goodbye properly, her exit from Westview had fans asking questions: Was Agatha really trapped as Agnes forever? Would Vision return somehow again?

Plus, Wanda's actions over the course of the season left a lot of fans troubled. Sure, she let the citizens of Westview go. But before that, she had them trapped, forced to exist in her fantasy world and experience her nightmares. It may not have been on purpose, but she still did that, and fans want to know how she's coping with that knowledge now.

Combine that on social media with Oprah's bombshell interview with Prince Harry and Meghan Markle, and suddenly everyone's timelines were a blur of WandaVision questions and Oprah interview memes.

With so much to unpack (not to mention the mid- and post-credits scenes setting up new adventures), there is only one place for Oprah to turn for her next groundbreaking interview. Cue the fictional phenomenon, Oprah With Wanda & Vision: A Disney+ Primetime Special.

Some fans have even prepped the marketing materials, should Disney+ decide to take the internet up on the idea.

The best memes were the ones in which Oprah drills down on all fans' unanswered questions.

Obviously, all audiences need now is a theme song... and perhaps a little bit of CGI magic to make sure everyone knows it's a Marvel production.

All episodes of WandaVision are streaming now on Disney+. Oprah With Meghan and Harry: A CBS Primetime Special will re-air on CBS for anyone who missed it on Friday, March 12, at 8 p.m. ET.