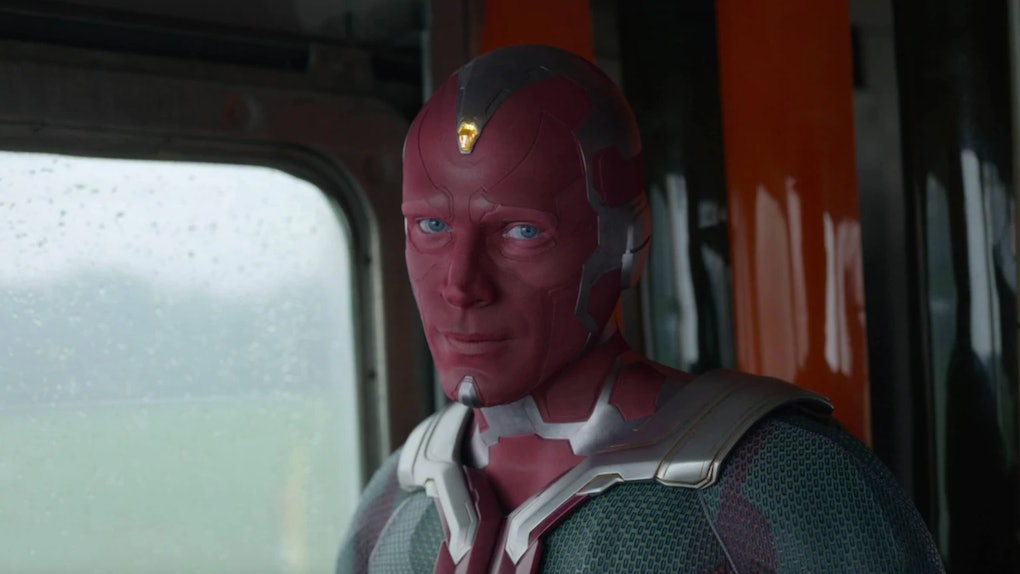 Warning: Major spoilers for WandaVision Season 1, Episode 8 follow. Throughout WandaVision, one major question has gone unexplained: How is Vision alive? Marvel Cinematic Universe fans watched him die (twice!) in Avengers: Infinity War, but he still showed up in the new Disney+ series good as new. Viewers finally got answers in WandaVision Episode 8, and its mid-credits scene reveals the implications of it all.

The episode, which hit Disney+ on Feb. 26, explored how Wanda's love of sitcoms and past traumas led her to create a new reality in the Hex, as her TV trope-y version of Westview is now known. Viewers learned that Wanda didn't actually steal Vision's body from S.W.O.R.D. headquarters like Director Hayward previously claimed she did. Instead, she'd gone to HQ in hopes of collecting Vision's body for burial post-Avengers: Endgame, only to find that Hayward and his goons were deconstructing Vision in order to use him as a weapon (exactly what he said he didn't want to happen).

Hayward also told Wanda she could bring Vision back to life (or "back online," as he said) with her powers. She tried to sense her lover by doing magic on his severed head, but tearfully admitted, "I can't feel you." So, a devastated Wanda left S.W.O.R.D. and drove to Westview, New Jersey, where she and Vision had previously bought a deed for their suburban dream home. Once on the plot of land where she and Vision were supposed to live their happily ever after, Wanda broke down in anguish. Her outburst caused power to accidentally explode of her, rebuilding Vision and creating the sitcom version of Westview fans have come to know. (Notably, during this explosion of power, her powers turned yellow, alluding to some major new witchy abilities.)

That's how Vision came to be in the Hex, but outside, the "real" Vision has also returned... but in a sinister way. In Episode 8's mid-credits scene, it was revealed that Wanda's powers (enhanced with the force of the Mind Stone) actually were successful in bringing Vision's body back online. But the S.W.O.R.D. technicians taking Vision apart obviously had a major effect on him, because his body was no longer red; it was white.

The same thing happened in the West Coast Avengers comics series, in which the Avengers found they were able to reassemble and reactivate Vision's body, but his original consciousness was gone. Vision was left with the emotionless demeanor he had when he was first created, with no feelings toward Scarlet Witch or their children. This ultimately led the two to break up and go their separate ways. Vision later swapped bodies with another Vision from a parallel universe, getting his usual red look back.

Fans will have to wait and see how this comic book lore ties into WandaVision. It certainly seems like the two Visions will have to face off, but will they end up switching bodies? Will one Vision somehow survive at the end of all this? And how does this all tie into upcoming movies like Doctor Strange and the Multiverse of Madness and Spider-Man: No Way Home, which seem to be bringing multiverses into the MCU? So far, that all remains unclear But here's one thing that *is* for sure: The WandaVision season finale is about to be one wild, emotional ride.