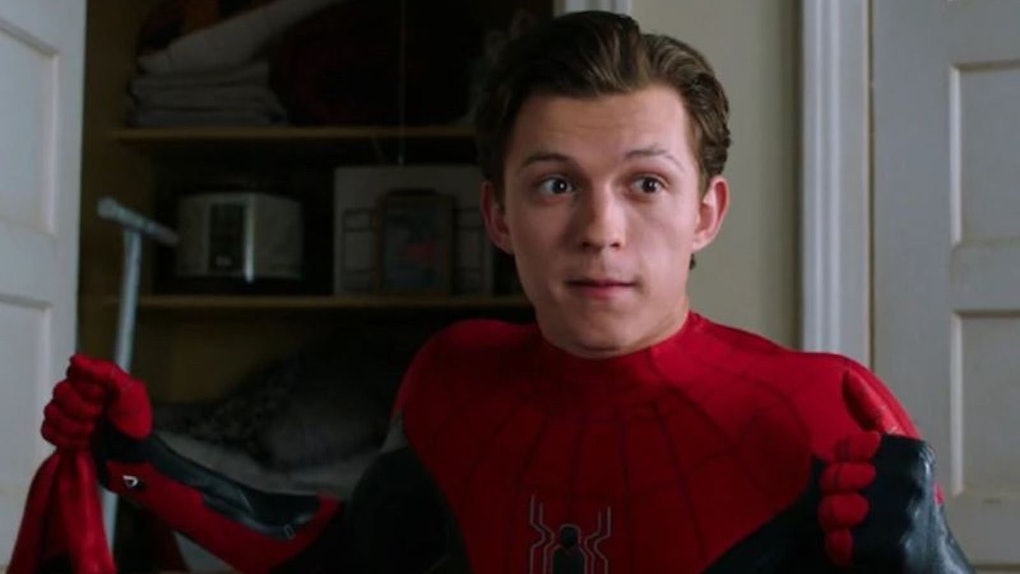 This Theory About 'Spider-Man: No Way Home' & Marvel's Multiverse Is Epic

With Marvel's Infinity Saga wrapped up, fans have been trying to figure out any details they can about the mysterious Phase Four, which is already off to an incredibly weird, reality-altering start with WandaVision. After some trolling from the Spider-Man stars, Marvel finally revealed the official title for the web-slinger's third movie within the franchise, and it was immediately met with tons of speculation about whether it confirms something fans have been suspecting for a while now. This theory about Spider-Man: No Way Home and Marvel's multiverse has the potential to take the MCU to a whole new level of weird, and fans could not be more pumped.

Marvel officially confirmed the title Spider-Man: No Way Home by releasing a short teaser clip of Tom Holland, Zendaya, and Jacob Batalon on Wednesday, Feb. 24. The new movie is slated to premiere on Christmas Day 2021, following the delayed premieres of Black Widow, Shang-Chi and the Legend of the Ten Rings, and Eternals. Those three movies are expected to be standalones, since Black Widow is an origin story set in the past and Shang-Chi and Eternals will introduce new heroes into the MCU. What superfans are really looking forward to are the upcoming sequels centered on established Avengers to really get into the meat of Phase Four. That's why WandaVision, Spider-Man: No Way Home, and Doctor Strange in the Multiverse of Madness are so important... and why fans think they may be connected as a sort of trilogy.

Marvel boss Kevin Feige has confirmed WandaVision will directly lead into the second Doctor Strange movie, which makes sense given the two magic-wielders have similar powers that connect to the multiverse. And given the new Spider-Man flick's name and some tiny details in how it was revealed, fans think No Way Home will also center on the multiverse, possibly finding Peter stranded in parallel dimensions that could introduce Tobey Maguire and Andrew Garfield's versions of Spider-Man. Although Holland has recently shot down this rumor, some fans are still convinced it will happen. And even if it doesn't, the new movie could still see Spidey jumping through different realities.

The No Way Home title *does* seem to suggest Spidey will be stranded somewhere with no clear exit. Plus, fans were quick to point out all the hexagons on the white board in the title reveal clip and how that could be another clue. FYI: Wanda's forcefield that distorts reality in WandaVision is referred to as The Hex and is shown to be made of hexagons, a shape that is closely related to distortions in reality within the MCU.

Some fans even think the Spider-Man cast was teasing the third film's possible foray into the multiverse before the title reveal. A day before Marvel announced the movie's real name, Holland, Batalon, and Zendaya trolled fans by announcing fake titles — Spider-Man: Phone Home, Spider-Man: Home-Wrecker, and Spider-Man: Home Slice. While these fake announcement could have just been a bit of fun, stans convinced of the multiverse theory are convinced there's more to them.

Longtime Marvel fans know better than to expected the franchise to reveal any major details ahead of its upcoming projects' premieres, so fans will just have to wait until Spider-Man: No Way Home swings into theaters in December to see if this multiverse theory turns out to be true.

More like this
This Video Of Disneyland's Marvel's Avengers Campus Is Super
By Cianna Garrison
Is Netflix Making A 'To All The Boys' Spinoff Series About Kitty? Here's The Tea
By Rachel Varina
Here's How To Stream 'Nomadland' So You Can Finally Get The Hype
By Rachel Varina
Stay up to date