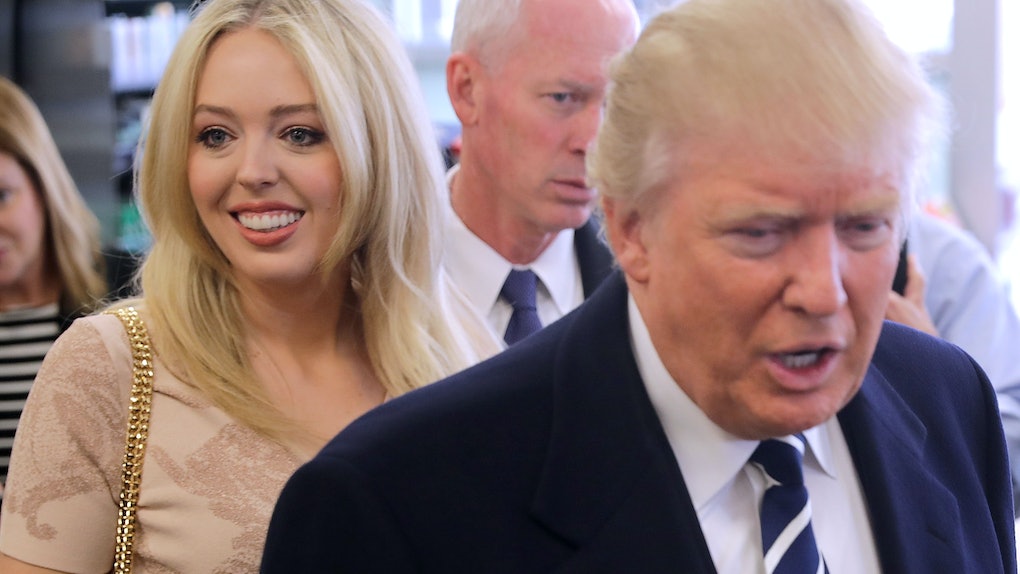 Father-daughter relationships can get complicated, especially if you're dad is the president. Tiffany Trump may be more of a low-key member among the Trump children, but these five things you didn't know about Tiffany and Donald Trump's relationship reveal so much about their specific dynamic — and it's seriously awkward. It doesn't look like any father-daughter dances are in the future here.

Tiffany Trump is the youngest daughter of Donald Trump, and his only child with his second wife Marla Maples. Unlike her older siblings, Tiffany has mostly stayed in the background throughout the presidential election and Trump's time in the White House. It's safe to say she's a bit of an enigma, but we do know for a fact that she's working hard. Tiffany is not only an Ivy Leaguer, having graduated from University of Pennsylvania, but she's currently enrolled in Georgetown Law School, which is super impressive. Tiffany and her father's relationship is a bit more low-key than her relationship with her mother, especially since Maples regularly posts to Instagram with photos of her and Tiffany vacationing and spending time together.

Not all parents as expressive as Maples, but that doesn't mean they love their children any less. However, Donald Trump and Tiffany's relationship is especially mysterious, and that's why I've compiled a few facts that might give us some clarity into the relationship between these two.

1. Tiffany Grew Up In A Different Time Zone From Her Dad

According to Vanity Fair, Tiffany grew up in California while her father stayed in New York after he and Maples split in 1997. Tiffany was only three years old when her parents separated; she grew up mainly with her mother.

With news like this, it's not that surprising Tiffany and Maples' relationship is so strong. In fact, Maples spoke to The New York Times in 2016 about raising Tiffany, and said that she basically raised her as a single parent. "I had the blessing of raising her pretty much on my own," Maples told The New York Times.

2. Tiffany's Apparently Not Completely Comfortable Around The Public Spotlight, Or Trump Himself For That Matter

On March 29, Trump visited Ohio to build support for his infrastructure platform, and brought Ivanka and Tiffany as backup. Elite Daily spoke to body language expert Dr. Lillian Glass about the dynamic between Tiffany and her father, who revealed that Trump might not view Tiffany in the same respect as her older sister.

"It's obvious that [Donald's] negative feelings towards Tiffany's mother has leaked over to Tiffany, as she is clearly not his favorite," Glass says. "It seems he doesn't respect her as much as he does Ivanka." Oof.

This may not come as so much of a surprise, since recent reports have claimed that Tiffany feels "awkward" around her father. To be honest, I can't really blame her.

This could certainly be a reason why Tiffany has been feeling uncomfortable around her father.

On Sept. 26, 2017, 15 hours of tapes from The Howard Stern Show were released to Newsweek, revealing Trump's response to hearing that Maples was pregnant was, "Oh, great." During a 2004 interview with Howard Stern, Trump recounted the story of how he found out that he and Maples would be expecting a child. He said,

I’m glad it happened. I have a great little daughter, Tiffany. But, you know, at the time it was like, 'Excuse me, what happened?' And then I said, 'Well, what are we going to do about this?' [Marla] said, 'Are you serious? It’s the most beautiful day of our lives.’ I said, 'Oh, great.'

At least he said he was glad it happened...? I don't know about y'all, but I'm actually quivering in discomfort.

Tiffany may not be a huge fan of being in the public spotlight, but her Instagram is a whole other story. She regularly posts photos of her on vacation and with friends, but rarely posts anything about her father — in fact, her last post dedicated to him was a Father's Day post nearly 10 months ago, on June 18, 2017. In addition to the Father's Day post, the only other recent mention of Trump on Tiffany's Instagram was for his birthday on June 14, 2017.

These may be back-to-back Instagrams, but since then there's been no mention of the president on Tiffany's social media.

On Nov. 8, 2016, Trump chatted with Fox & Friends on the phone and discussed his children. Even though he raved about his older children Ivanka, Donald Trump Jr., and Eric, he flat out said that he's proud of Tiffany to a "lesser extent."

I'm very proud of my children. I mean, I'm just looking at them right now as an example. But I'm very proud 'cause Don and Eric and Ivanka and, you know, to a lesser extent 'cause she just got out of school, out of college, but, Tiffany, who's also been so terrific. I mean, they work so hard.

Um, Donald, Georgetown Law is ranked 14th nationally by U.S. News & World Report. I hardly think that's something to not be proud of.

Then, while Tiffany was traveling with Trump to Ohio on March 29, Trump openly praised Ivanka for her hard work in his infrastructure plan, but left Tiffany basically unacknowledged.

"Speaking of a job well done, we have two of my daughters here today," Trump said while in Ohio. "Ivanka, who's working hard on infrastructure. Ivanka! And Tiffany!"

"And Tiffany." That's it. Nothing else. So shady.

Like I said, father-daughter relationships are never easy, but they're sure to get even harder when politics are involved. Perhaps with Tiffany in Washington D.C. for the next few years, things might look up for the two in the future.