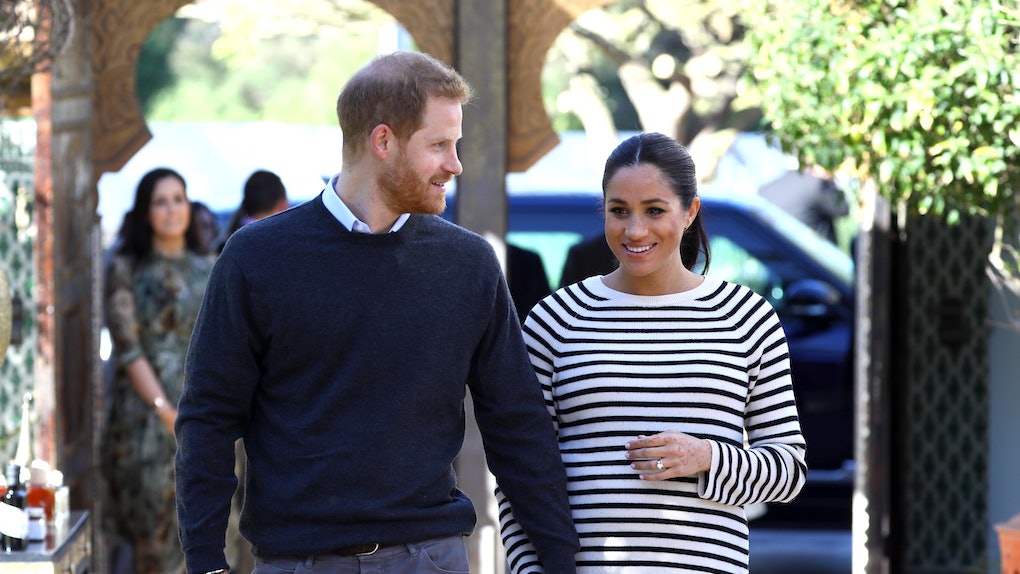 May 6 has proven to be a beautiful day, both at Frogmore Cottage and at Buckingham Palace. The Duke and Duchess of Sussex welcomed their first child on May 6, 2019 and along with the announcement came the news that Meghan Markle delivered a baby boy. Birthdays are incredibly special, but before I share what the royal baby of Sussex's birth chart reveals about his personality, let's take a closer look at his spot in line to the British throne, OK? Prince Harry and Meghan Markle's bundle of joy was born at 5:26 a.m., London time. Born just two weeks after Queen Elizabeth's 93 birthday, the royal baby of Sussex is the British monarch's eighth grandchild, putting Baby Sussex seventh in line for the throne.

Shortly after the news broke of the baby's arrival, Prince Harry told the media, "I haven’t been in many births, this is definitely my first birth. But it was amazing, absolutely incredible, and as I said, I’m so incredibly proud of my wife. As every father and parent would say, your baby is absolutely amazing. But this little thing is absolutely to die for, so I’m just over the moon." Swooning much? I can't wait to see pictures of this little royal. According to CNN International, the Duke and Duchess of Sussex were still considering names for their newborn at the time of his arrival.

For those of you wondering, I've got the royal baby's birth chart right here, and — spoiler! — this bundle of joy is going to be a royal handful.

The Royal Baby's Birth Chart: A Powerful Addition To The Family

The newest member of the royal family was born with a sun in Taurus, sharing zodiac signs with Queen Elizabeth, his great grandmother, and his cousin, Charlotte of Cambridge. Taurus is a fixed earth sign with a stubborn streak, which means once this little royal sets his mind on something, there's really no going back. Period. In the eyes of Taurus, slow and steady wins the race, as the bull is persistent and strong-willed. To top it off, the baby's ascendant sign is also in Taurus, which only emphasizes his desire for stability and his practical approach.

Ruled by sensual Venus, planet of love and beauty, Taurus has an innate appreciation for the arts. Those born under the sign of the bull are typically born with an artistic ability, and since Taurus rules the throat, more often than not, they're natural-born singers. Also, double Taurus means double Venus, so I predict the royal baby will be instantly recognized for his beauty, charms, and grace. I also predict the youngest member of the British Monarchy to be a lover of life, whether it be via nature, or the finer things. An interest and love of nature will certainly bode well with his parents, who fell in love while traveling together.

The Duke and Duchess of Sussex's first child was also born with a moon in curious Gemini, which means he will likely be intelligent, witty, and naturally communicative with his emotions. The moon can also determine the type of relationship we have with our mothers, and in Gemini, this means the royal baby will find his mother to be versatile and mentally stimulating. In my opinion, this mercurial energy combined with his grounded Taurus vibes only intensifies his headstrong personality. Like I said, he'll certainly be a handful.

More importantly, the baby was born with three planets retrograde: Jupiter, Saturn, and Pluto. Saturn retrograde could mean the royal baby will likely struggle with authority, and in turn, be a bit of a rebel. (Sounds like he'll take after his dad, huh?) Saturn is a representation of the father, so this could also mean that he and Prince Harry have a karmic duty of sorts. Needless to say, themes related to discipline and structure will be very prominent in this child's life. With Pluto retrograde during his birth, he may also have an underlying fear of being controlled or manipulated.

Royal rebel? Most definitely. Although I'm pretty sure he and his cousin, Prince George of Cambridge, will have a thing or two in common when it comes to their rebellious ways. Guess we'll have to wait and see these two in action to know for sure.

More like this
TXT's Zodiac Signs Prove That Opposites Really Do Attract
By Chelsea Jackson
Your Mars Sign Meaning Reveals A Lot About Your Sexual Needs, So Take Notes
By Roya Backlund
Each Zodiac Sign Has A Lucky Day Of The Week That Goes With It & Here's Yours
By Chelsea Jackson
Stay up to date