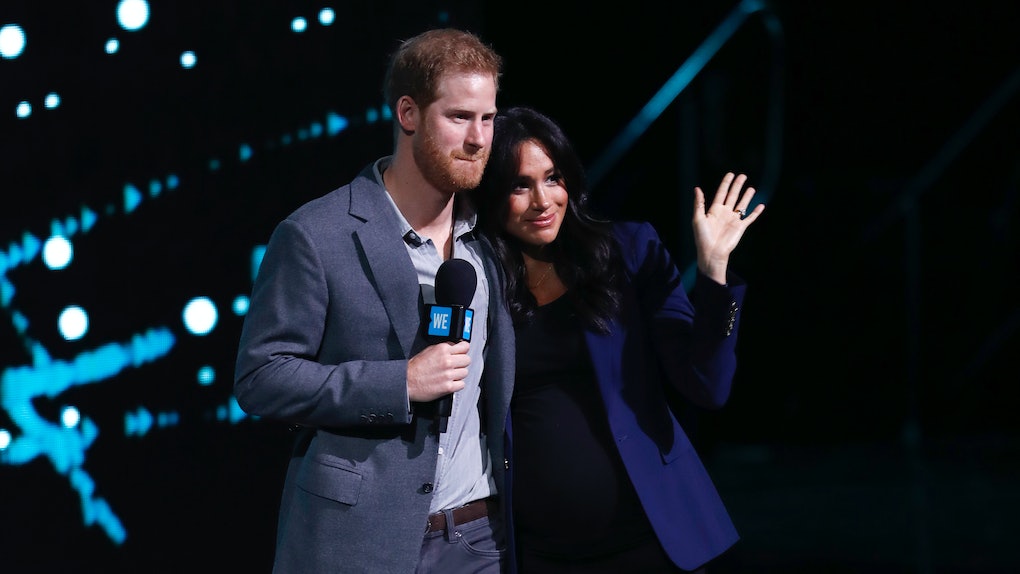 Will Meghan & Harry's Baby Be King? Here's A Breakdown Of The Line Of Succession

Prince Harry and Meghan Markle have a lot of titles. Prince, Duke, Duchess, and now, parents! Meghan Markle gave birth to the couple's first child, a baby boy on May 6, according to an announcement from Buckingham Palace. The couple hasn't announced Baby Sussex's name just yet, but they did confirm that Meghan and the baby are in good health. Yay! So while we wait for more announcements, let's think about this baby's future. Because that's totally our business! Will Meghan and Harry's baby be king? The baby has just entered the English line of succession, but there's a lot that has to happen for them to ever be the ruling monarch of the United Kingdom.

To put it bluntly, there's a very small chance Baby Sussex will ever be the King of England. There's not even a big chance that Prince Harry will be king one day. The way the line of succession works, according to the Letters Patent Queen Elizabeth issued in 2012, is that the line of succession is determined by the birth order of the oldest son of the monarch's children. That means Prince Charles is first in line for the throne, Prince William is second, Prince George is third, Princess Charlotte is fourth, Prince Louis is fifth, and then comes Prince Harry.

All that is to say that little Baby Sussex is far down in the line — seventh, to be exact. For them to become the monarch, everyone ahead of him in the line of succession would either have to die (dark) or abdicate the throne. So like I said, it would take a lot for him to end up sitting on the throne.

And the baby's official title, by the way, has not yet been announced, but we can make some educated guesses. Because Baby Sussex's father is not the first born of the son of the monarch, they traditionally have not had the prince/princess title. Those titles are traditionally reserved for the first born's children, which is why Prince George, Princess Charlotte, and Prince Louis all have the prince/princess titles. Any children Harry and Meghan have will most likely have the lord/lady titles, unless Queen Elizabeth decides to bestow them with a different one.

Even though this little royal nugget will most likely never be the U.K.'s monarch (I mean, honestly, good! Because it would mean a lot of sad things would have to go down in order for that to happen), the baby news is obviously very exciting!

Buckingham Palace announced on May 6 the arrival of little Baby Sussex. The announcement said,

The Queen, The Duke of Edinburgh, The Prince of Wales, The Duchess of Cornwall, The Duke and Duchess of Cambridge, Lady Jane Fellowes, Lady Sarah McCorquodale and Earl Spencer have been informed and are delighted with the news.

It also confirmed that Doria Ragland, Meghan's mother and Baby Sussex's grandmother, was present for the birth.

The Duchess’s mother, Doria Ragland, who is overjoyed by the arrival of her first grandchild, is with Their Royal Highnesses at Frogmore Cottage. Her Royal Highness and the baby are both doing well.

Congratulations on the newest addition to your family, Meghan and Harry!