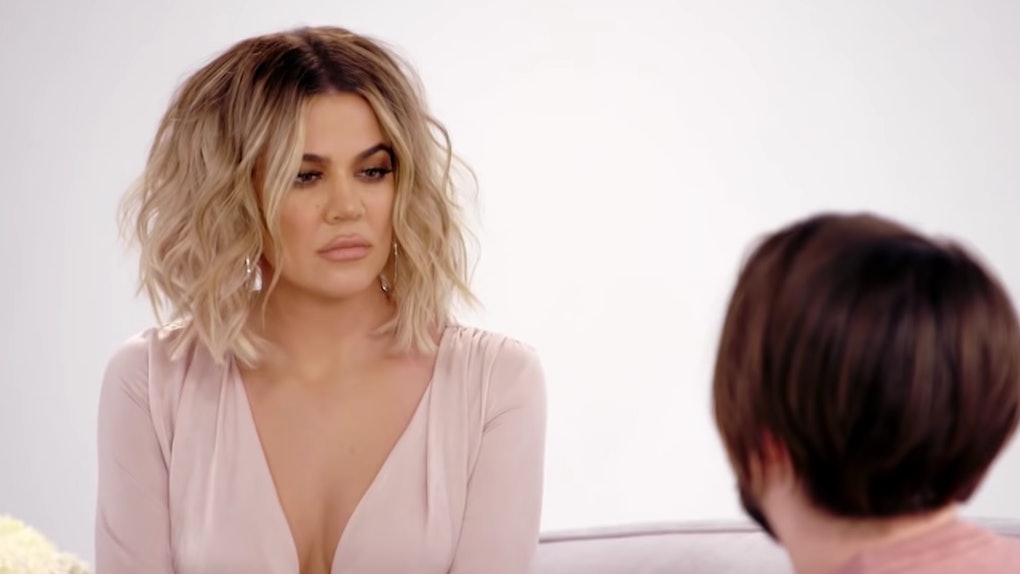 Here we go again! Khloé Kardashian's transformation reality show Revenge Body is back and, this time, she's working with at least two people who have been cheated on in their life. Watching the Revenge Body Season 3 trailer stings, but I'd be lying if I said there wasn't something totally therapeutic about watching people slam those giant rope thingies in a gym. Frankly, if I was cheated on, I'd want to talk to Khloé Kardashian, too. She is sort of like the unofficial spokesperson for moving on with your best life after someone you love betrays you, which makes her conversations with this season's contestants that much more intriguing.

Surely, you recall when the videos surfaced of Kardashian's then-boyfriend Tristan Thompson kissing other women while she was busy going into labor with their daughter, True. After a year of doubling down on their relationship in efforts to make things work for their new family, reports broke that Thompson allegedly kissed family friend Jordyn Woods over Valentine's Day weekend in 2019. Since then, Khloé's been doing what she does best, aka picking herself up after a sh*tty situation and moving forward (in style). Elite Daily previously reached out to Kardashian, Thompson, and Woods' teams for comment on the cheating reports but did not hear back by the time of publication.

In the Revenge Body Season 3 trailer, viewers are introduced to three individuals. The first is a woman who just went through a rough breakup and is working to show her ex he "didn't break her." The second is a former soldier who saw a fellow veteran sleeping in his car and invited him to crash with him and his fiancée. After leaving for a weekend, he came home to find his friend and fiancée had slept together. Lastly, a woman discovered the day after she bought her wedding dress that her fiancé and father of her child also cheated on her.

All so brutal. All so ugh. As Khloé describes it, being cheated on "knocks the wind out of you."

However, the trailer also shows these three individuals being pushed to their physical limit, striving to adopt a healthier lifestyle, and putting their energy back into themselves. It doesn't hurt that there's a smoking hot trainer with an accent, too.

In the words of KoKo, to anyone who has been cheated on, "Well, f*ck them. Who needs them?"

Apparently, not her. As far as the general public knows, Kardashian and Thompson are still broken up and have no intentions of getting back together anytime soon. According to reports, the moment Kardashian found out about the rumors regarding Thompson and Woods, she called things off immediately. Along with hearing her opinions on cheating via Revenge Body, Keeping Up With The Kardashians fans are waiting for Season 16 to catch up to Valentine's Day 2019 to see what really went down. At the time of publication, Woods appears to remain exiled from the famous family.

The new season of Revenge Body premieres on E! in summer 2019, and KUWTK is still going strong at 9 p.m. on Sunday evenings. I can't quit you, Khloé. You're strong AF in all of the ways, girl.