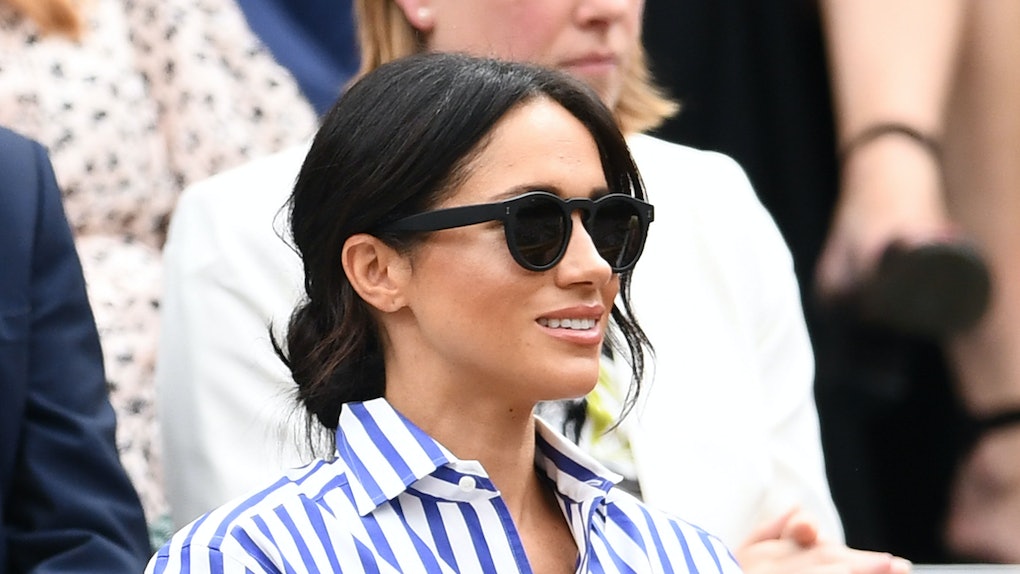 While most of us will likely never understand what it's like to be part of the British royal family, many can agree that the Duchess of Sussex is definitely the most relatable — especially when it comes to beauty. Back in July, the new royal's makeup artist Daniel Martin shared that, despite her sparkly title, she still does her makeup by herself. Now, Martin has finally revealed the reason why Meghan Markle does her own makeup — and his answer may make you love the former actress even more than you already do.

"She's gotten more comfortable doing her own makeup. She loves makeup and she’s good at it!" he told People. "She's been doing her makeup herself. She’s not fussy — she's just trying to get it on and get out the door."

That said, although we all enjoyed seeing the duchess rock bright, rosy cheeks during the Queen's Young Leaders event at Buckingham Palace back in June, don't expect to spot her wearing any bold beauty looks anytime soon — even a red lip.

"The one time she did a red lip, she just didn’t feel comfortable in it," Martin shared. "She likes to talk and she’s not a fussy person, so she doesn’t want to have to worry about anything."

But while she may not be too picky when it comes to makeup, one thing that Markle hasn't budged on since moving to England is her intricate skincare routine, which is what Martin said was the secret to her natural glow on her wedding day.

"She has great skin, and I had to deal with natural light — her in the church, her being televised and then her going outside again during the carriage procession," he explained. "She couldn’t have a ton of makeup on because it would look so different in every variable, so less is more. It was literally skin care, a bit of foundation selectively and concealer, but that’s when you really saw her skin come through."

Another trick that Martin has used on the 37-year-old for her luminous skin may surprise you, but if you have an extra $5 lying around, you can run to your local drug store to try it out, too! "Before highlighters, you would do highlighting with Aquaphor," the makeup artist told E! News on Sept. 3. "Aquaphor will give you that same texture, especially in a photo [when applied] on the high points of the face."

Since meeting her literal prince, the former Suits star's broadened platform is not only being used for activism, but her minimal beauty looks are also inspiring the next generation of young women to accept themselves for who they are.

Of course, while there's nothing wrong with loving the look of makeup, Martin notes that, with social media pressuring women and teens to feel as though they need makeup to be beautiful, Markle is helping to balance out the narrative. "I’ve had so many moms reach out to me saying thank you for showing my 14-year-old daughter that she doesn’t need to go to school with so much makeup," Martin shared.

The duchess is certainly inspiring in every way.