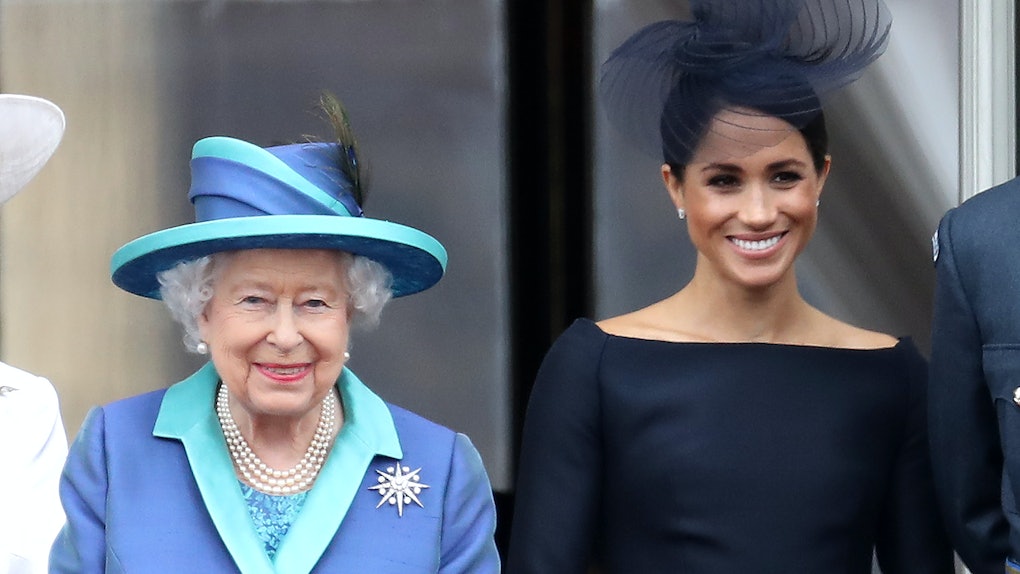 Prince Harry is set to attend Prince Philip's April 17 funeral without his wife at his side, but don't go thinking there's royal drama brewing due to her absence. The Duchess has an important reason for staying home in California, and according to a new report by People, the Queen's reaction to Meghan missing Prince Philip's funeral was entirely empathetic. Elite Daily reached out to Buckingham Palace and the Sussexes for comment on the report, but did not hear back by the time of publication.

Meghan is currently expecting her second child due this summer, so it was on doctor's orders that she stay home in California while Harry took the long flight to the UK to be with his family. She "has been advised by her physician not to travel," a Palace spokesperson said.

According to a source in California who spoke with People, Meghan reached out to the Queen ahead of the funeral. "It was always a given that Harry would return to England for his grandfather's passing," the source shared, adding that both Harry and Meghan "were in contact with the Queen" after Philip's death. "Meghan expressed condolences. The Queen understands why she can't travel at the moment," the source said.

Harry is said to be isolating at Frogmore Cottage ahead of his grandfather's funeral services. The funeral will be held at St. George's Chapel at Windsor Castle, and the entirety of the event will be televised.

Harry released a statement about Philip's passing on April 12 and said he will be "sorely missed."

“My grandfather was a man of service, honour and great humour," Harry wrote. "He was authentically himself, with a seriously sharp wit, and could hold the attention of any room due to his charm—and also because you never knew what he might say next.”

Harry's loving tribute also made mention of his soon-to-be-born daughter, who would have been Philip's great-granddaughter.

"Grandpa, thank you for your service, your dedication to Granny, and for always being yourself. You will be sorely missed, but always remembered—by the nation and the world. Meghan, Archie, and I (as well as your future great-granddaughter) will always hold a special place for you in our hearts."

Meghan recently opened up about experiencing a miscarriage in early 2020 in an emotional essay, so it's understandable she's been advised to err on the side of caution while pregnant. She's surely sending her love from across the pond.