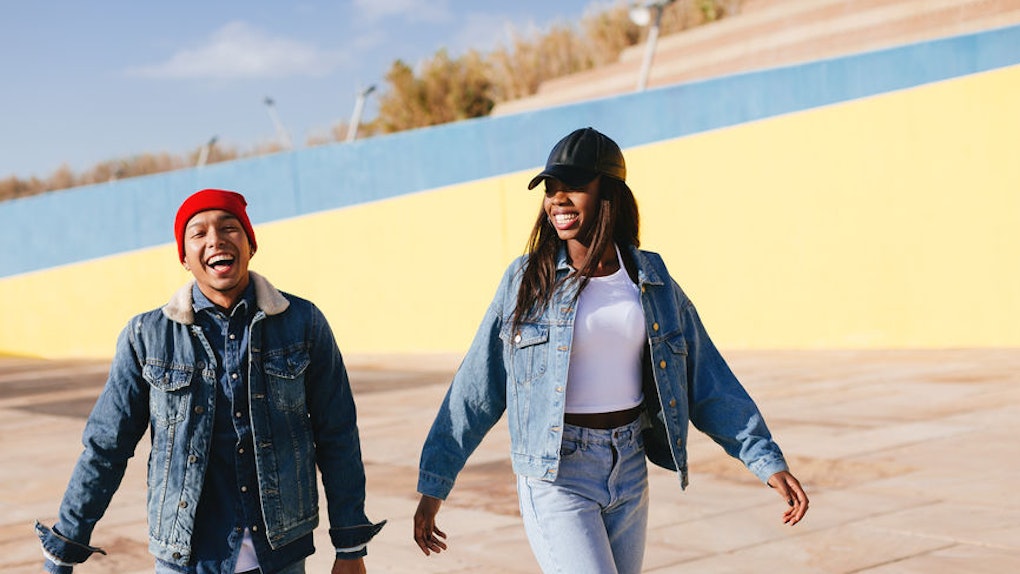 The Psychology Behind Casual Dating, According To Science

When my great-grandmother Eloise Selby, a true Southern belle, met her beau (and eventual husband) Earl, they went on one proper dinner date before he asked her to “go steady.” Of course, that was the norm in the early 1930s. But let's be real — today, they could have easily dated for seven months or more without ever labeling it or defining it whatsoever. I've often wondered about the mental and emotional implications of this trend. What is the psychology behind casual dating? Why do we do it? Does it have an impact on our psychological well-being? And if so, what kind of effect can it have?

First off, let’s define casual dating. Essentially, this can refer to any dating or sexual encounters that happen without a commitment. Once you start calling someone your boyfriend or girlfriend or discussing exclusivity, it’s no longer “casual.” There’s a wide variety of reasons why someone might actively choose to go the route of casual dating, and there’s definitely nothing wrong with it. For some, casual dating is a stepping stone between hooking up and a long-term relationship. For others, it’s just a more carefree way to socialize when work or other obligations are making it impossible to commit to anything serious. But are those the only reasons why someone might choose to keep it casual?

One 2010 study published in the journal Sex Roles, which surveyed 221 college students, found that both men and women actually prefer traditional dating to hooking up. Both male and female participants also agreed on one of the biggest risks involved in both dating and hooking up: becoming emotionally attached to a partner who is not interested in them. It would be safe to say, then, that some people pursue casual dating as a way to protect themselves from getting too hurt. By investing less, they can (theoretically) expose themselves to less risk of rejection.

This begs the question, however: Are you really protecting yourself by keeping it casual? It’s still possible to get emotionally attached to someone you’re just hooking up and hanging out with, after all. In fact, Helen Fisher, renowned biological anthropologist and Senior Research Fellow at The Kinsey Institute at Indiana University, asserts that getting frisky with someone alone can trigger some serious feels. According to Fisher, any kind of sexual activity activates the dopamine system in the brain, which has the potential to lead you to fall for someone.

“With orgasm, there’s a real flood of oxytocin and vasopressin, chemicals in the brain that are associated with deep attachment,” she explains in a Big Think video.

Also, it seems that some people who approach things from a casual standpoint are secretly wishing for something more. Fisher cites a study of 515 college-age men and women, which found that 52 percent of men and 50 percent of women admitted that they went into a hookup hoping to trigger a longer relationship.

Still, while some may be crossing their fingers that their hookup leads to a happy ending, there are others who truly prefer casual dating, whether because they just got out of a serious relationship, are prioritizing their career, or for another reason entirely. There have been many studies on whether people who engage in casual dating can still have satisfying sex lives, and the results have been mixed. A 2015 study published in The Canadian Journal of Human Sexuality showed that sexual satisfaction was higher for people in married, engaged, or exclusive relationships, but there was still a positive link between casual dating and sexual satisfaction. And when it comes to relationship satisfaction, ultimately, it comes down to what you were hoping to get out of casual dating. According to the study, those hoping that their relationship will turn into something more serious were just as satisfied with their relationships as married and cohabitating couples. Meanwhile, those who weren’t expecting a future with the person they were dating reported lower relationship satisfaction will be lower than that of cohabiting, engaged or married couples. This suggests that your attitude and expectations around casual dating play a massive role in what you get out of it. If you’re optimistic that your casual dating situation could evolve into something more, you may feel more content with your relationship.

Here’s where it gets interesting. Many of us consider love and lust to be totally different things. While one is associated with emotional closeness and long-term relationships, the other is associated with physical attraction and one-night stands. But guess what? Psychologist Jim Pfaus and his team at Concordia University in Montreal examined MRI brain scans of men and women and found that for both genders, feelings of love and sexual desire actually originate in the same part of the brain. Of course, that doesn’t mean they’re the same thing — Pfaus noted that you can definitely have a desire for sex without love, and love without desire for sex. But it does indicate that the two are more interconnected that we may have thought.

The 2012 study, which was published in the Journal of Sexual Medicine, revealed that while lust activates the part of the brain associated with motivation and emotion (the ventral striatum), love lights up the part that affects decision-making and, interestingly, has been linked to drug addiction (the dorsal striatum). Yet it’s notable that both lust and love activate a part of the striatum — an area of the brain that receives messages about memory and emotions. The researchers concluded that emotional attachment can sprout from sexual desire, which could explain why during that post-coitus cuddle sesh with your hookup buddy, you may start fantasizing about introducing them to your family.

“Love is actually a habit that is formed from sexual desire as desire is rewarded,” Pfaus said in a press release.

Casual dating has plenty of benefits. It allows you to explore a number of potential relationships simultaneously in order to figure out exactly what you’re looking for and what works for you. It enables you to focus on other areas of your life that may need more attention right now than your relationships, such as your career, your education, or other passions. And provided that your expectations/needs are shared from the get-go, casual relationships can definitely be mutually fulfilling.

That said, science shows that our brains may be essentially wired to associate sex and lust with attachment and love, which explains why casual dating can easily get messy. After hooking up with someone, it’s very possible to have a change of heart and hope that your casual situation turns into something more. At the end of the day, the best way to minimize the risk that you or someone you casually date gets hurt is to consistently communicate about your feelings. Feelings can change, after all. As long as you stay open and honest about your needs and wants, you can keep it casual — without causing any unnecessary confusion or heartbreak.