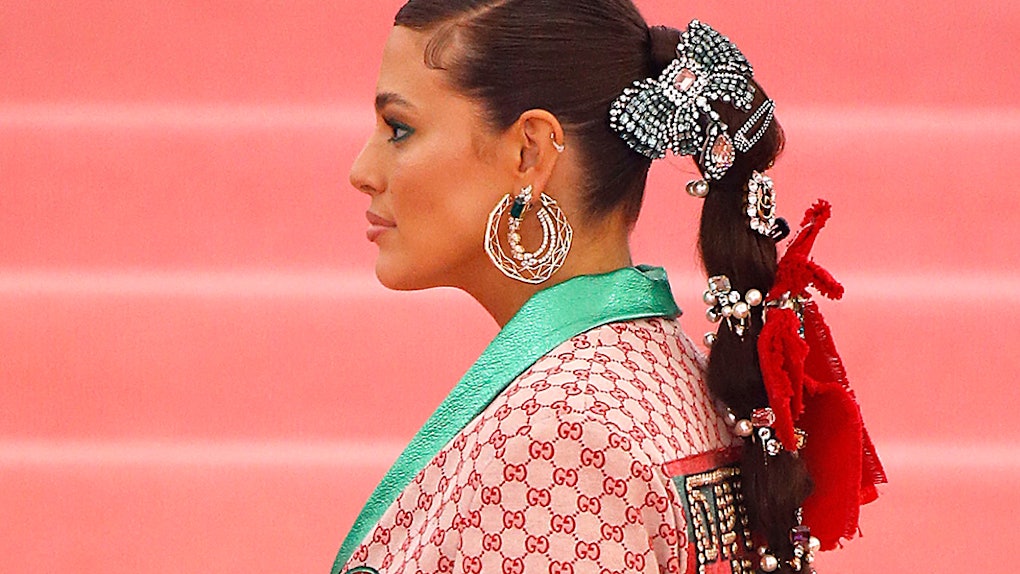 For some reason, I've always associated huge hair statements with long, luscious strands worn down — or when up, in an oversized, Victorian-era bouffant, minimum. That's all to say that a ponytail has never struck me as particularly bold or dramatic, but now that I've seen a few good examples of the ponytail with accessories trend that took over the Met Gala on May 6, I finally see the grandeur a pony can deliver. I'm sorry I ever doubted you, Ariana Grande's favorite hairstyle! Pretty much all my fave celebs decided to accent their campy attire with eye-catching ponytails, and I couldn't have been more inspired. While not every single one was wearable or recreatable, they were all fierce and camp, and that's what matters most. Own those ponytails, ladies, work those updos!

First up in my inspo files is Ashley Graham, who reigned supreme as Pony Queen of the night, thank you very much. Celeb stylist and hair accessories connoisseur Justine Marjan was behind the beautiful look, and she embellished the waist-length bubble pony with Gucci hair clips (which start at $290 a pop, so that's casual) as well as a few from her own collaboration with Kitsch.

This is the standard to which you need to set your pony aspirations, people:

Fortunately, you can buy some of the clips for under $30:

Another member of updo royalty was YouTuber Liza Koshy, who spent her second year interviewing celebrities for Vogue atop the Met steps. Hairstylist Takisha Sturdivant-Drew was the visionary behind Koshy's slicked-back crown and silver coil-wrapped pony, which finished with an explosion of curly ends. So good. Obviously, silver coil isn't exactly a hair accessory, but it's a good example of the fact that metallic silver really pops against dark strands.

Don't try this at home, kids. Or do. I'm probably going to:

In a "similar, but different" vain, Tessa Thompson served another long, skinny pony, but hers had an even edgier twist. Hairstylist Lacy Redway somehow managed to transform Thompson's strands into a fully leather functional whip, and oh my gosh, how did they pull this off. Again, this isn't exactly an easy-to-immitate style, but it deserves a moment of appreciation nonetheless.

She took Willow Smith's song "Whip My Hair" literally, y'all:

If a mile-long leather pony isn't in your future, try the Eugenia Kim Mallory Patent Leather Scrunchie ($65, shopbop.com) for just a hint of edge instead:

Gal Gadot was one of the stars on the carpet who went small on the pony, big on the accessory. Her looped, braided low pony was too cute to handle, and she topped it off with an over-the-top headband complete with gigantic pearls and diamonds.

Can I wear this to my wedding in place of a veil? Please and thank you.

Pearl clips are a dime a dozen these days, but pearl headbands? That's new. I'm loving the Lele Sadoughi Ivory Woven Pearl Headband ($150, lelesadoughi.com) as an elegant yet wearable pick:

Last but not least of the Met Gala pony-wearers, Cara Delevingne went all out with her super long, lustrous pony and a carnival-esque headpiece by artist Machine Dazzle that was both sweet and scary. The key to her look was color, and while I don't recommend crafting your own headpiece out of bananas and dentures, you'll still find that a few rainbow hair clips can go a long way to shake up a simple ponytail.

Personally, the Cher Hair Clips ($48, baublebar.com) are some of my all-time favorites:

Besides Ashley Graham's bedazzled bubble look, these dramatic ponies don't directly translate into real-life wear, but hey, the theme was camp! What did you expect? Still, I'll definitely be incorporating elements of these boldly accessorized updos into my own summer hairstyles, from colors and metallics to leather and pearls.

More like this
Lucy Hale Debuted Blonde Hair & Looks Like A Whole New Person
By Margaret Blatz
Boho Locs Founder Lulu Pierre On Overcoming Self-Doubt To Create A Booming Brand
By Brittany Leitner
When Does Tati Beauty's Second Product Launch? Something New Is Coming
By Bella Gerard and Theresa Massony
Stay up to date