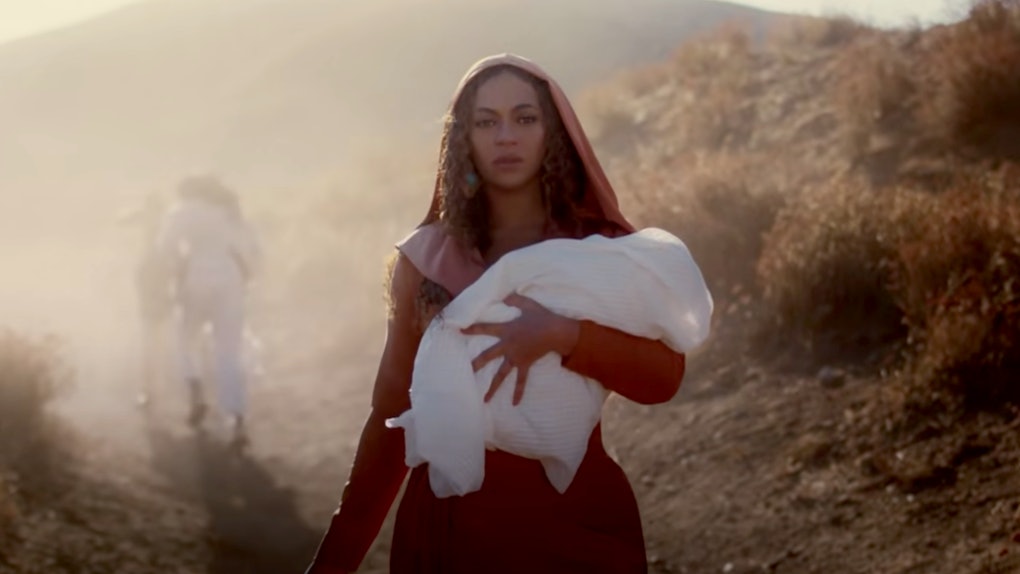 The Beyhive is used to Beyoncé dropping full visual albums every few years, but Black Is King is a bit different from her past two releases. Unlike 2013's Beyoncé and 2016's Lemonade, the 2020 musical film was announced a month ahead of time rather than put out as a surprise. On top of that, fans already knew a good chunk of the songs featured in the album since they were taken from Bey's work on last year's The Lion King: The Gift soundtrack. Still, Beyoncé managed to fill the release with surprises, and a bunch of Lion King easter eggs in Black Is King show just how much her time working on the Disney remake inspired her.

When Beyoncé and Disney announced Black Is King at the end of June, they released a statement confirming the visual album was meant to "reimagine the lessons of The Lion King for today’s young kings and queens in search of their own crowns." The new release came one year after Beyoncé starred in 2019's The Lion King remake and curated the film's soundtrack, The Lion King: The Gift. The original soundtrack featured several new songs sung by Beyoncé, along with featuring Kendrick Lamar, Childish Gambino, Jay-Z, Pharrell Williams, and various African artists.

Beyoncé's songs from The Lion King: The Gift make up the bulk of Black Is King, so it's no surprise the visuals also include a ton of Lion King references. The trailer for the visual album heavily hinted to fans early that the storyline would follow a young boy having to learn how to be a leader on his own, much like Simba had to in the movie.

The visual album kicked off with a word-for-word Lion King reference, as Jame Earl Jones' voice recited Mufasa's iconic "Circle of Life" speech over images of a baby in a basket floating down a river. The iconic phrase is mentioned again several times in the album's second track, "Find Your Way Back." In fact, the theme of the second song is very similar to the talk Mufasa gives to Simba at the beginning of The Lion King, as Beyoncé sings:

After "Find Your Way Back," Black Is King includes another word-for-word Lion King reference as Chiwetel Ejiofor's Scar tells Simba to leave him alone over images of the young protagonist of the visual album. The visuals also show a monkey leading the child into a dangerous warehouse, evoking the imagery of Rafiki and the Elephant's Graveyard from the original movie.

The track "Don't Jealous Me" is a clear ode to Simba's foray into the Elephant's Graveyard, even using lines from the voice actors of young Simba and young Nala, JD McCrary and Shahadi Wright Joseph.

The next Lion King shoutout brings fans into the most fun and silly segment of the Disney movie, as Timon and Pumbaa's "Hakuna Matata" speech plays over visuals of the Black Is King protagonist being chauffeured in a leopard-print car.

The carefree voiceover is used to introduce the song "Mood 4 Eva," which stands out as Black Is King's most decadent video, depicting Beyoncé and JAY-Z rocking couture outfits in a luxurious mansion. The lavish visuals are an ode to Simba's lighthearted, carefree days palling around with the meerkat and warthog in the savanna before having to confront his destiny.

To transition to Simba's adult life, Black Is King employs the audio of Rafiki reuniting with Simba in the savanna as the intro to Bey's song with Satta Wale, "Already." The song is all about self-confidence and affirming her fans are kings, so it's the perfect accompaniment to Simba realizing he is meant to become king. Because of these themes, it's fitting that the track ends with Mufasa's posthumous "Remember who you are" line to Simba.

The visual album gets to Simba's climactic battle with Scar in the intro to the track "My Power," as Beyoncé's own voiceover as Nala plays, commanding the lions to join forces against Scar. The ferocious song is all about owning your power and standing up to anyone who tries to belittle you, making it the perfect choice for Simba's declaration of war.

In the end, Black Is King concludes The Lion King's story by seeing the protagonist on his throne, as Beyoncé closes out the visual album with the soundtrack's lead single "Spirit." Because of this familiar storyline, Bey's new release is not only a stunning showcase for her new songs, but it also serves as a fresh, fascinating retelling of The Lion King.

More like this
'The Marvels': Release Date, Cast, Trailer, Plot, & More Info
By Ani Bundel
Will Sharon Carter Be The Villain In 'Captain America 4'? This Theory Makes Sense
By Ani Bundel
Who Will Star In Disney+'s 'Percy Jackson' Series? Casting Is Happening Now
By Dylan Kickham
Stay up to date