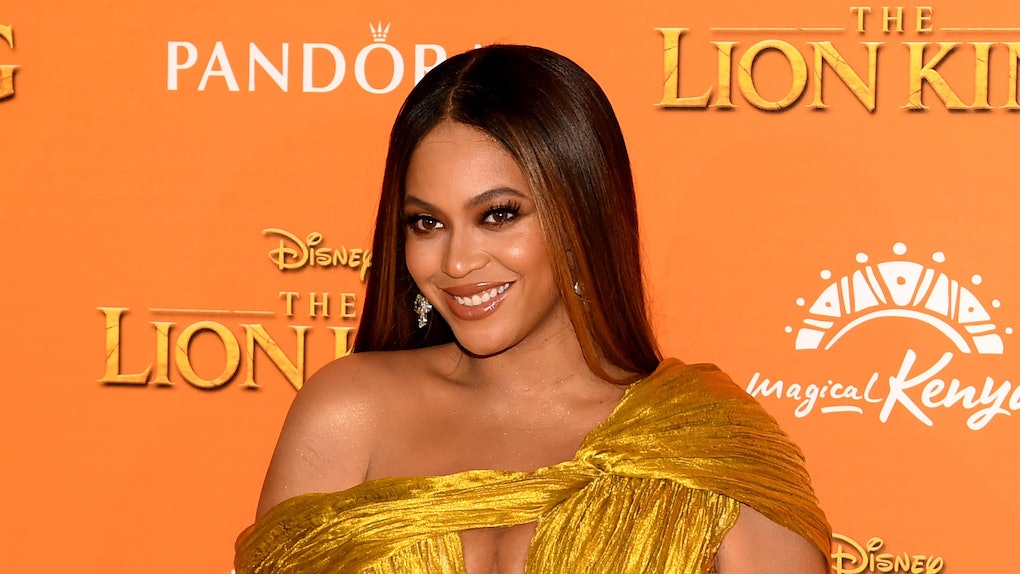 Beyoncé's 'Black Is King' Visual Album: Everything You Need To Know

To celebrate its one-year anniversary since hitting theaters in July 2019, Beyoncé is bringing back The Lion King through her new visual album Black Is King. The upcoming release is inspired by the movie's soundtrack curated by Beyoncé, The Lion King: The Gift, and it's written, directed, and executive produced by the "Spirit" singer herself. Beyoncé's Black Is King visual album is a film you don't want to miss because it will not only feature so many celebrities you love, but it will also celebrate Black culture in such a beautiful way.

According to a press release, the story will re-imagine the lessons of The Lion King "for today's young kings and queens in search of their own crowns" by following a young king's journey through betrayal, love, and self-identity as he seeks to reclaim his home and throne. Along the way, he receives guidance from his ancestors, father, and childhood love to help guide him. The story will be told "through Black voices of today" and will include stunning visuals "that celebrate Black resilience and culture."

The film will premiere on Disney+ in just a few weeks, so if you're interested in watching, here's everything you need to know about Black Is King to get you ready.

On June 19, Beyoncé gave fans their first taste of the album by releasing the surprise single "Black Parade." The release date was meaningful because it fell on the Juneteenth holiday commemorating the end of slavery in the United States on June 19, 1865. With lyrics like "I'm for us, all Black/ All chrome, Black-owned/ Black tints, matte Black," Beyoncé celebrates Black culture and her own roots in the song.

In order to give back, Beyoncé pledged all proceeds from the single to support Black-owned small businesses in need through her BeyGOOD initiative. Listen to "Black Parade" below.

If you loved The Lion King: The Gift, you'll be happy to hear that, apart from Beyoncé, the film will star some of the soundtrack's featured artists.

Although it hasn't been confirmed who exactly will appear, anyone from Childish Gambino and Pharrell Williams to Jessie Reyez and Major Lazer could guest star, since they each have songs on the soundtrack. That's not all, because Black Is King will also feature other surprise guests that weren't featured on the album.

A week after the release of "Black Parade," Disney dropped a teaser for the visual album. Near the 0:24 mark, fans noticed a glimpse of Beyoncé with Jay-Z, who featured on the The Lion King soundtrack. Because their daughter, Blue Ivy, also sang on the album, fans wonder if she'll be making an appearance in Black Is King as well.

Almost exactly a year after The Lion King released on July 19, 2019, Black Is King will begin streaming on Disney+ on July 31. According to Variety, the platform recently stopped offering its seven-day free trial, meaning fans will have to purchase the subscription in order to watch.

If you aren't signed up for Disney+ just yet, you better do so now so you're ready to stream Black Is King right when it premieres.