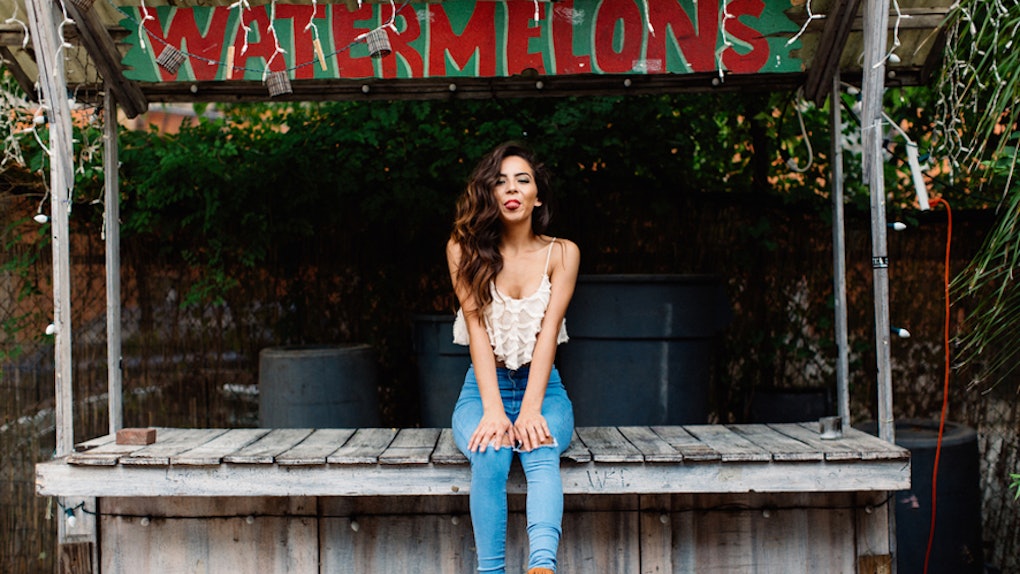 Cheers to the weekend! You and your crew might be headed out to happy hour, or you're hitting up the bars on Saturday night to dance until dawn. But, one of your friends doesn't drink and will choose to sip on a huge cup of Coca Cola over a cold glass of beer any day. If you're close to this girl, then you probably know her reasons better than most. Some people just don't understand how a 20-something can be at a bar without alcohol in hand, but she's so happy just the same. The girl who doesn't drink wants people to know a few things, that way she can stop getting asked so many questions. It's just part of her lifestyle, and she wouldn't want it to be any other way.

She's the one who's always playing "mom" at the end of the night, but doesn't quite mind. As long as her friends aren't making a mess in her car, she loves being the designated driver and always has a fun night out. People will offer to buy her drinks, and she'll politely turn them down, or even ask for something non-alcoholic instead. The reactions are always priceless, and can either be sort of rude or almost proud.

Truth is, you can still have an amazing social life without taking a sip of alcohol. The girl who doesn't drink may have some personal reasons, or she just wants to steer clear just because — but, there are seven things she really wants you to know.

1. She Loves To Get Social

Getting social is still her style. Most people couldn't stand to be in a bar if they weren't planning on drinking while they were at it. But, she finds the scene just as fun and loves being surrounded by her squad. She honestly saves a lot of money because she'll buy a soda and can drive herself around at the end of the night. She's really not phased by now when people ask her why she's sticking to water instead of whiskey.

She's not sure when it happened in history, but suddenly getting social in your 20s usually translated to sipping on something alcoholic. She'll get all dressed up and break out the heels just for the pictures and spending some quality time with her people. She'll focus on her friends rather than doing it up with drinks.

2. She's Not Judging You

Where she might not choose to drink, she doesn't judge her friends, or the people around her, when they go to the bar and decide to grab a beer. Everyone lives their lives differently, and she knows that they have their reasons just like she has hers. She's there for the experience and knows exactly what's going to go down.

In fact, she loves watching her friends drink from the sidelines and will still dance with them all night long just the same. Her people are the most important people in her life, and seeing them live their best lives brings her a lot of joy. Judgement-free zone, always.

Just like Pam from The Office, the girl who doesn't drink is incredibly down-to-Earth. She won't ever be the one to make a fuss over her lifestyle choices, and doesn't like any drama in her friend crew. No matter what the situation may be, she always approaches it with a lot of grace and likes to keep the peace.

Honestly, does anybody really like confrontation, or even being so extra? Other than occasionally wearing a pair of heels, she'll always choose to be comfy and casual — and you'll see it in every aspect of her life, including her conversations. Your relationship with her will be entirely low-maintenance, as long as you give her a little bit of the same kind of love and attention she will always show you.

Leave the salty remarks to Miranda Priestly and her designer shoes. This girl often gets the most misunderstood when people assume she's uptight. Just because she doesn't choose to drink on the weekends, doesn't mean that she thinks she's better than the people in the world who do. Once again, it's just a part of her lifestyle that's oh-so-personal, and she wouldn't dream of judging anyone for making their own decisions, too.

If she ever comes across as moody, it's just because she's tired of being asked so many questions. She knows she's not crazy for steering clear of vodka and the like, but anytime she meets someone new, it's bound to be a conversation topic. Don't judge her decision not to drink, and let it go when she doesn't give you every reason why.

The girl who doesn't drink is honestly so confident in herself and seriously self-aware. She's bold enough to make her own decisions and stick to them, despite all of the inevitable peer pressure. She loves knowing what's going on with her body at all times. She listens when it's tired, and focuses on fitness to feel rejuvenated all around. Truth is, she just really knows who she is as a person and loves always being on her A-game.

Just because she's self-aware and almost always feeling good about herself doesn't mean that she's the loudest one in the bunch, though. She sits quietly back and people-watches. But, when you hand her a drink at the bar, she knows exactly how she'll react right away. She's never felt better about standing in her own shoes.

The constant downside of drinking is the hangover that you have to deal with the next day. You wake up in desperate need of water and a bacon, egg, and cheese sandwich — and suddenly, half of your Saturday has gone down the drain and you settle for endless episodes of your fave TV show. After college, this scenario isn't quite the same, but the girl who doesn't drink is so busy that she wouldn't want to risk wasting a day, especially on the weekend.

During the week, she works hard at what she does. She probably has at least one passion project on the side, and is always hustling. As hard as she works, she plays just the same. But when you're so busy like her, you'd take the caffeine over the Cosmopolitan any day.

7. She Stays True To Herself

The girl who doesn't drink isn't going to change for anyone. Truth is, she's incredibly proud of herself and her lifestyle decisions, and isn't about to let peer pressure get in the way. You can put a drink in front of her and she'd just ignore it and walk away. It's not for her, and she's ready for everyone to really let it go.

Honestly, we can all take a little advice from her on how to love yourself. Being a 20-something can be a lot to handle at times, especially when we let our minds fill up with what other people may think. Learning to ditch the complex mess we make for ourselves and just continuously stay true to who we are is so key. It's something that this girl has really figured out along the way.

So, this all doesn't mean that you should stop drinking. Your life is yours to live just the same. But, if you were wondering about the girl who doesn't drink, now you know a little more.