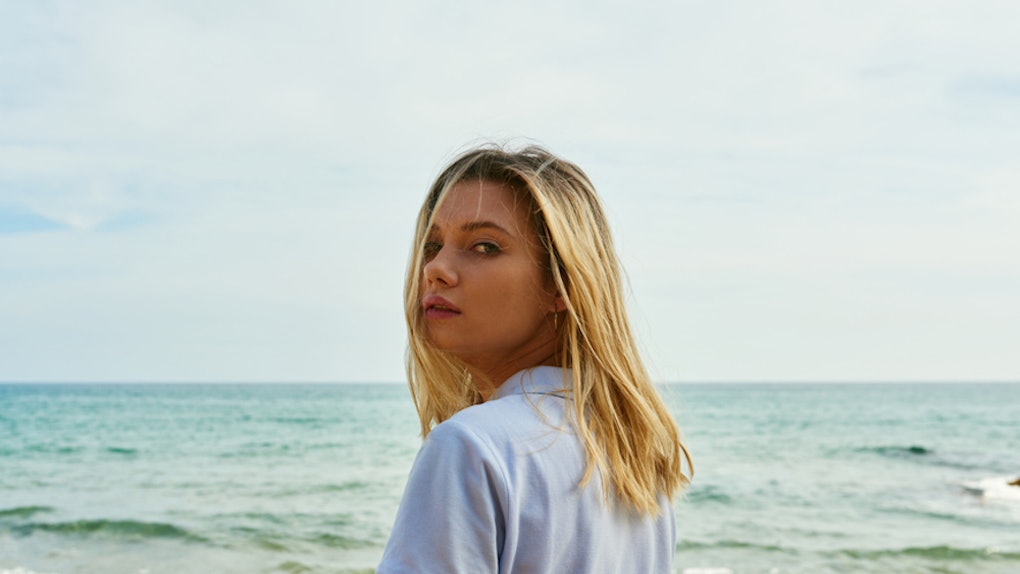 Honestly, the girls who are just living life without a worry in the world really have the right idea. These are the ones who are always around for a good time, and don't let the drama get in their way. They have bold dreams, and a blunt personality, and surround themselves with the sweetest human beings. Truth is, they just don't have time for all the nonsense people can create sometimes. The real world, in particular, has a way of making things oh-so-complicated, and she'd always prefer to keep it quite simple. But, the girl who DGAF seemingly gets a bad reputation at times, and wants you to know a few things before you start making assumptions.

Life is better when you're laughing. The more moments we can spend living life instead of trying to figure out how to survive the real world, the richer we become. We often get so caught up in wondering why someone hasn't answered our text message yet, or second-guessing our decisions, that we waste a lot of time. If for one minute we put all those worries away — well, we'd get a lot more done, that's for sure.

This girl, though, is practicing what she preaches. She's strong enough to face life, turn the corner into the unexpected, and walk the road less traveled. A lot of people love making their life into a reality television show, but she's looking for adventure, always. So, don't assume that she's lazy and the like. These seven things are what she really wants you to know.

There's a big difference between distancing yourself from unnecessary drama, and actually not caring. The girl who DGAF wants you to know that she's found the balance between the two, and is really such a sweetheart. Her attitude might make her seem unapproachable sometimes, or like someone who would never be a shoulder to cry on. But, she's so supportive of her friends and family, and feels strongly for the things she's truly passionate about.

When it comes to the things that really matter in life, she's all-in and will be the first to put aside any differences and have a good laugh. People so easily attract to her because they know she loves to listen to their stories and share a beer on a Saturday night. You might honestly mistake her for the "nice" girl on any given day, who is also so misunderstood.

The girl who DGAF has perfected the art of being blunt. Not many people would be willing to give any situation to you straight, but you can always count on her to make honesty her best policy. Where others want to spare your feelings and sugarcoat what's actually the worst — she'll tell you the truth upfront, because in the long run it's always better to see the details in some clarity.

In that way, she's really reliable. Out of all the friends in your crew, she'll always be there for you when you need it the most. When that guy ghosts you, she'll be the first to say you deserve better and get you on your feet sooner than you ever thought possible. Would you want it any other way?

This girl knows what she wants, and is bound to be following all of her wildest dreams one day. She doesn't let herself get hooked up on life's nonsense, because it only stands in her way, and she won't change for anyone. Life has a way of putting all kinds of obstacles in our path already, so why would she make it worse? Success is all about believing in yourself and looking at the bigger picture as well. She knows that her passion will always be enough to drive through the drama and straight through the sky.

She'll honestly never see a problem in being blunt, or remaining cool and collected, even in sticky situations. Having that confident mindset has gotten her quite far in life and friendships, and she's sure she'll reach the stars.

To her friends, this girl might seem a bit flakey at times. Like Phoebe from Friends, she's the one who skips out on lunch because she found something better to do, or she just quite honestly wanted to watch some Netflix and take a break. In those times, it's easy to see where she gets some of her bad reputation. But, what she really wants you to know is that she's always going to be there when it counts.

I once had a teacher who told us half of life is about showing up. Whether it be to class, that coffee date with your bestie, or to a tough meeting on a Monday morning — just being there is most of the battle, and it shows your crew and surroundings that you care. Especially when you're 20-something, you have to learn to sort through the real world for what's worth your time. It's kind of part of "adulting," and this girl has just figured it out.

Not dealing with life's drama has made this girl happier in the long run. Sure, she still has her moments when she's upset or stressed out beyond belief. But, when it comes to her usual days, she knows she's quite #blessed. When you stop looking for all of the things in life that are the worst, you have more time to see what's the best and beautiful. Surrounding yourself with negative people alone can put you into the mindset that everything sucks, even if you don't believe it yourself. You'll find you've wasted a lot of energy trying to see the positive again.

The girl who DGAF wants you to know that she's being proactive. She prefers to see life through a brighter lens, and has found a lot of happiness in leaving all those small worries behind. After all, there are much better things to care about, and a whole world of experiences that awaits us always.

The lazy life is not her style, although she can see where it can come across that way. When you kind of check out of a lot of life's nonsense, it can seem like you'd rather spend your days in bed or constantly in sweatpants. Walking around campus, she most likely will be the girl who always looks comfy, but you should know that her style and attitude doesn't say everything about her. She's not lazy; she just is doing her own thing at all times and puts her focus on what she finds important.

The only person she really wants to impress is herself. Living life in a pair of jeans wouldn't make sense to her, and she wants to stay true to the person she's become. Once again, she's confident in her character and what she wants out of life, and will put effort into relationships that lift her up just the same. She'll likely always be down for an adventure, as long as it feels worth her time.

Let's all put things a little bit in perspective. The girl who DGAF knows that there's always more to life that what we see every day. Our passions and the way the people work around us are much bigger than what we can control. So, why do we get so fed up trying to figure it all out? Maybe she's traveled a lot and surrounded herself in other cultures, or just grew up learning that the world runs this way. However she gained her perspective, it's made her happier, and has fueled her attitude toward what's good and what's not.

We'll all make a thousand mistakes in our lifetime, and she knows that she's not perfect by any means, too. But, this girl also understands that people can be petty. We should always try to go high instead of oh-so-low.

Odds are, we can learn a lot from this girl, especially if she's in our friend crew. She's not just surviving; she's thriving. You'll surely want to think again before making any assumptions about the girl who DGAF.