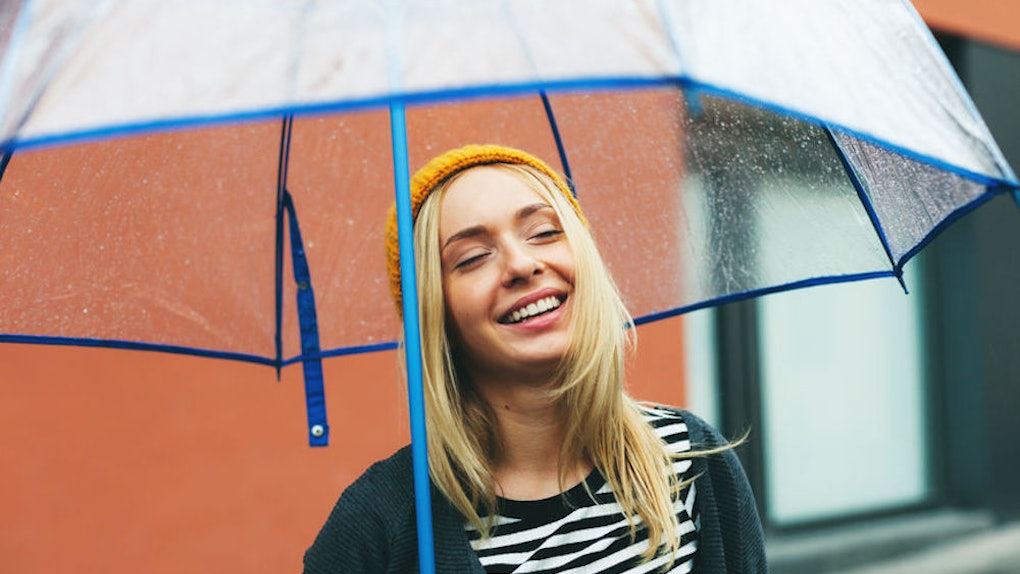 Girls who are always running late, unite! Actually, can we meet up in like five minutes? There's a line at the coffee shop, and clothes all over your bedroom floor. Whoops, here you go again. Fingers crossed that somebody saved you a seat, or that being early is out of style. Let's be honest: You're the friend who's always running late. This all sounds a bit familiar.

More often than not, you genuinely try to be on time. Your friends will send a message in the group chat, asking if everyone wants to grab dinner the following night. You think to yourself, "Perfect! I have so much time to prepare." With high hopes, you pick out your outfit well in advance, and plan to take a nap a little earlier in the day. Even if you hit a bunch of traffic, you're convinced you will still make it to the restaurant before everyone else. They'd show up truly shocked that you arrived with minutes to spare. Plot twist! (Do people still say that? Let me know.)

But, per usual, the day of the event comes around, and you're rushing around your apartment. The alarm didn't go off on your phone, and you stayed in bed a little too long. Your entire plan is thrown off, and you settle for a mediocre outfit and "be right there" text. Honestly, give yourself a pat on the back. You just want your friends to know that you tried, amongst these six other things.

Being late all the time means that you're constantly living life on the edge. You've become a pro at racing against the clock and always keep people on their toes. (Will she show up on-time, or will she rush in with her hair in the perfect messy bun? The world may never know.)

At any given moment, you're juggling a lot of commitments. You're going from one meeting to the next, while texting back your best friend and posting a #TBT picture on social media. To others, it may seem a bit chaotic, but it's become your norm. Try to find the balance, and then let your friends know that life is more interesting this way.

2. You're Full Of Energy

It takes a lot of energy to be running from one place to the next all the time. You're sprinting from class to your lunch date, and listening intently when your bestie has good news to spill. She tells you that she just landed her dream internship, and you literally start jumping with joy. Seriously, you're more active than the Energizer Bunny.

To you, life is like one big adrenaline rush. It's a rollercoaster of ups and downs, and you're sitting in the front seat. In your friend crew, you're known for rallying and making the most of truly awkward moments. People rarely give you enough credit for hustling and bustling, because they're always so focused on the clock. But, that might change right now.

3. You're Not Trying To Be Rude

The last thing you want people to believe is that you're being rude. Sure, it's not respectful to waste someone else's time. Letting them wait around in a restaurant while you're sifting through your closet or making phone calls, can be a sign of selfishness. It tells your people that your priorities are more important than theirs. See how that works?

But, being someone who is also chronically tardy, I know that you're not trying to be that person. Life happens, and you get caught up in the whirlwind. You want to take this time to apologize, but also speak your mind. It's not what it seems on the surface — people, please don't assume.

4. You Always Tell The Truth

When it comes to being late, it's also better to be honest. You've learned over the years that your friends and family will know when you're coming up with excuses or wild stories for why you're the last one there. It's a classic, "My dog ate my homework" situation every time, and just better to avoid all around.

So, instead you practice holding yourself accountable and being blunt. You'll be honest when you're still getting ready, instead of already walking out the door. You dodge the, "Just a second," texts because you know it's more like an hour. Anything else would qualify as kidding yourself.

5. You're Actually A Team Player

Running late is like an individual sport. You're the only one in the game, because everybody else has already crossed the finish line. But, despite coming in last place, you're actually quite a team player. You go with the flow, and understand that sometimes the turtle wins the race instead of the hare. It's a tale as old as time.

Since you're always the last one to show up, you often put your friends in charge of the plans. You don't want them waiting around for you, especially if you're missing the entire first part of the afternoon. You don't mind showing up to the festivities and hopping right into the fun, and at the end of the day, you'll say "good game" to the clock and move on.

6. Sometimes, You're Running Late For A Good Reason

To all of the friends who have dealt with my tardiness before, hear me out on this one. Sometimes, running late comes with a good reason. It's not always this self-induced tornado of events.

You get stuck at work, decide to stay late to help out with a big project, or take your time in the name of self-care. That's OK. You're just a human being with priorities and passions, and the people around you should understand.

In those moments, you'll often send a text to your friends saying you're behind schedule, or need a few more minutes to get your ducks in a row. Fingers crossed that they won't assume anymore that you're just sleeping through your alarms or still getting ready.