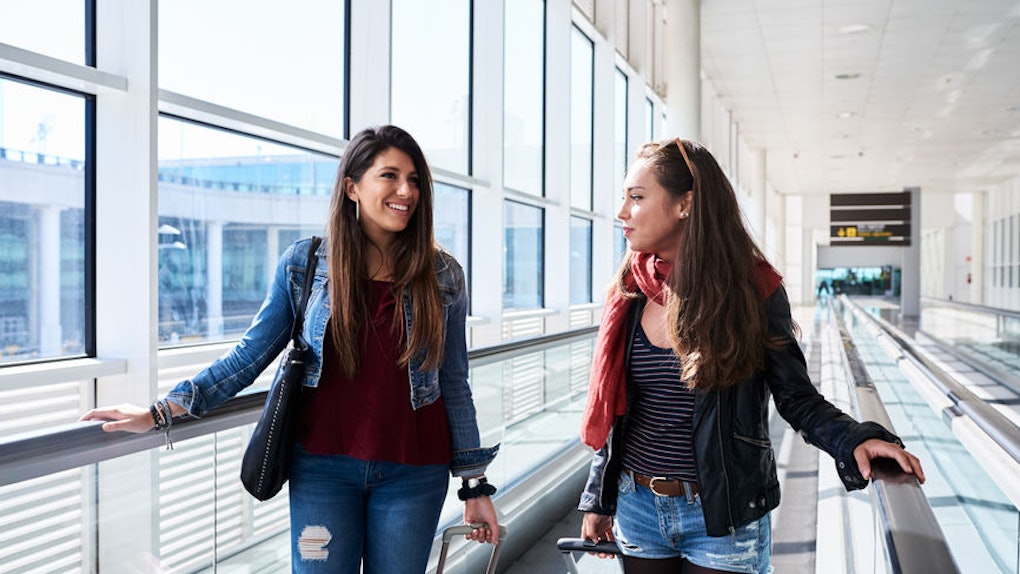 It is a truth universally acknowledged that airports aren't exactly the cleanest establishments in the world. Think about it: You’re in close proximity to strangers at all times — when you’re in line checking luggage, going through security, waiting for a stall to open in the public bathrooms, browsing the closet-sized convenient stores for a book to read during your flight — and germs tend to travel even faster than airplanes, my friend. But the dirtiest place in the airport probably isn’t even on your radar when you start rattling off every nook and cranny of the place that you’re positive is infested with airborne snot and tiny drops of palm sweat. It’s not the waiting area seat to your right, and it’s not the kiosk countertop you just bought a bagel from. Nope, the dirtiest place in an airport is so in-your-face, you probably don’t even think twice about it. And if you’re absolutely stumped, here’s a hint: The bottom of your carry-on bag is holding a lot more than the September issue of Cosmopolitan and a half-eaten granola bar.

TBH, there simply aren’t enough words in the English language for me to accurately express the loathing I feel toward airport security. Aside from the fact that, depending on what time your flight is, the lines are never-ending, and the people working at each checkpoint rarely greet you with a smile, it’s the chaos of it all that really trips me up. First, you have to wait for one of those little plastic tray things that never fit everything neatly, so you have to scramble to dump all of your stuff in as quickly as possible. Plus there’s the whole ordeal of having to take your shoes off, which really skeeves me out — especially in the summer, when people often aren’t wearing socks, and you can literally see bare footprints all over the floor. Yuck.

And, listen, I understand airport security is 100 percent necessary for the safety and well-being of travelers, and believe me, I’m all kinds of appreciative. But, on top of the commotion of the process, and the tension from airport employees, airport security actually is home to the dirtiest place in the entire airport, according to the results of a new study. I think it’s safe to say my reservations are justified then, wouldn’t you?

The study, which was carried out by a team of pandemic experts (aka scientists who specialize in widespread diseases) from the University of Nottingham and the Finnish National Institute for Health and Welfare, found that the plastic bin you just casually toss your favorite backpack into — you know, the one you literally carry everywhere — is straight-up festering with respiratory viruses. In other words, you’re collecting more than luggage once you make it past the Transportation Security Administration (TSA); you’re also picking up germs that could lead to sinus infections, lung infections, the common cold, and even the flu.

To find out what the dirtiest place in the airport actually is — because, as you can imagine, there are a lot of solid contenders — researchers swabbed all the most popularly frequented places around the Helsinki-Vantaa Airport in Finland (think toilets, staircase rails, passport-checking stations, and children’s play areas) back in the winter of 2016. Their findings, published in the journal BMC Infectious Diseases, showed that not only are those plastic security bins the dirtiest part of an airport, toilets should be the least of your worries.

Luckily, though, the research found that the most common virus, even in the germ-ridden of spots, was that of the common cold. So, it could be worse, right?

Of course, this isn’t to say that the Helsinki-Vantaa Airport in Finland, and only the Helsinki-Vantaa Airport, is gross, or anything like that; this spot just so happened to be the guinea pig of the experiment. All airport security bins are questionable, as are a lot of other places around your typical airport — which, TBH, isn’t all that surprising, because everyone is touching something with some part of their body at all times. It’s only natural that germs would spread in this kind of close-knit setting.

The takeaway from this experiment, according to Jonathan Van Tam, a co-author of the study and a professor of health protection at the University of Nottingham’s School of Medicine, is that any crowded, public area, such as an airport, has the potential to spread viral infections. And, more importantly, you can do your part to minimize the spread of those germs by practicing good hygiene, especially when you're traveling. Van Tam said in a statement,

People can help to minimize [the spread of germs] by hygienic hand washing and coughing into a handkerchief, tissue or sleeve at all times but especially in public places. These simple precautions can help prevent pandemics and are most important in crowded areas like airports that have a high volume of people traveling to and from many different parts of the world.

Aside from the obvious hygienic practices, like washing your hands before and after you eat and after using the bathroom, there are a ton of other little ways to keep yourself and others healthy when traveling. For example, sometimes soap and water isn’t enough, so I personally always carry a miniature bottle of hand sanitizer with me for good measure. And, even though you might be taking extensive measures to make absolutely sure your hands stay clean, try your best to avoid touching your face or biting your nails. I know myself, and I have a tendency to touch my lips with the tips of my fingers if I’m eating any kind of finger food. If you can relate, instead of grabbing the food with your bare hands, use the item’s packaging to your advantage. It’s also a good idea to pull your hair back for a flight (I hear scrunchies are all the rage these days) to ensure you aren’t tempted to touch your face by brushing fly-aways out of your eyes.

What’s more, airport food isn’t always the tastiest, nor is it the most nutritious. Consider packing your own snacks, but instead of loading up on Twizzlers and bags of white cheddar popcorn, bring a baggie of orange slices for a little extra vitamin C, or veggies with a to-go pouch of hummus or guac. It’s also a good idea to keep a box of zinc candy in your bag. These treats are often used to boost the body’s immunity, which you’ll definitely need if airports really are a playground for the common cold.

But, listen: I probably don't have to tell you what behaviors are or aren't healthy. Just keep in mind that in crowded, public places, you have to kick your hygiene routine into overdrive if you want to travel and feel your best doing so.