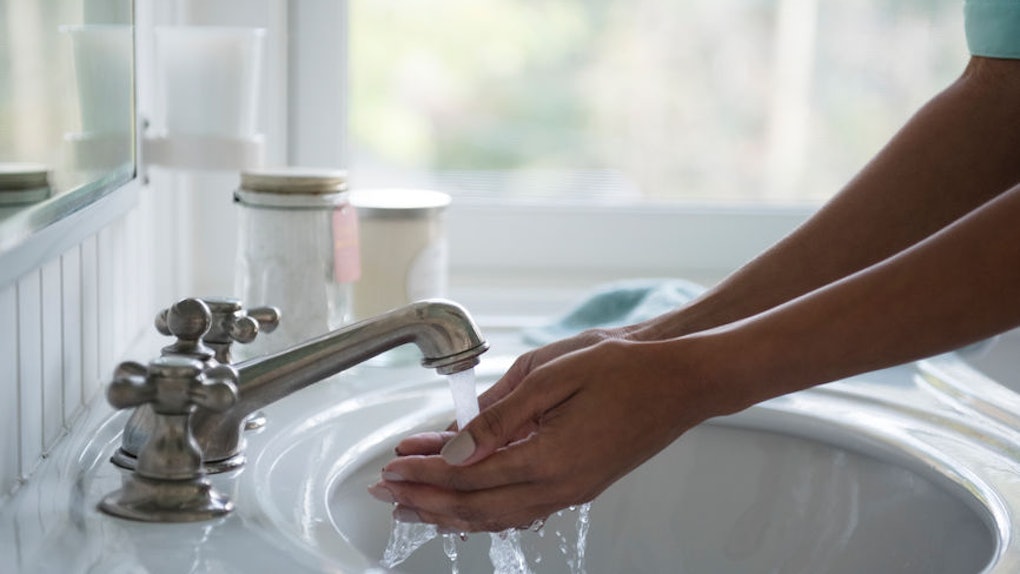 How To Wash Your Hands Properly Shouldn't Be That Hard, But Science Says You're Doing It Wrong

You’ve just gotten home from a long commute on the train or subway, and the first room you retreat to is the bathroom to wash your hands. The person sitting next to you must have had a monstrous cold, because the ahh-choo from their sneeze wasn’t just a sound, it was a sprinkle of germs that landed on your hands. Between that encounter and grabbing onto the pole for stability when the train jolted, there are probably thousands of germs festering on your palms, but do you know how to wash your hands properly to get all the grime off?

Listen: If you, at the very least, turn on the tap, rinse off, and towel-dry, I’d give you an A for effort, but science isn’t going to cut you the same slack. Rumor has it a lot of people must have missed out on some hygiene lessons in school, because according to a new study from the U.S. Department of Agriculture (USDA), 97 percent of the time, people aren't washing up the right way — and it’s a problem, to say the least.

TBH, I’m a little worried about society’s (and, OK, possibly my) inability to follow some of the most basic rules of hygiene: First, Charlotte Cho of Korean beauty online retailer Soko Glam called you out for washing your face in the shower instead of committing to an actual regimen over the sink — which, OK, I'll admit I've totally been there, too. But then a survey from oral care start-up Hello Products uncovered the gross fact that millennials are neglecting to brush their teeth as much as they should. Then research presented at the 2018 American Society of Microbiology meeting made it known that you're definitely not washing your dish towels enough. And now you’re getting the figurative finger wag for skimping out on scrubbing your hands clean? Come on guys, we can all do better than this.

Taking a few minutes to thoroughly wash your hands might sound tedious, but there might be a lot at risk if you don't.

I know I must come off sounding like a parent or something when I report this kind of stuff, but seriously guys, washing your hands after you go to the bathroom, and before and after you cook, eat, etc., is really important. Yes, you don't need me to tell you that, but honestly, maybe you do: In 2015, a survey conducted by the Bradley Corporation found that, while 92 percent of Americans acknowledge the fact that hand-washing is super important, only 66 percent actually do it on the regular. Fast-forward to 2018, and the corporation's annual survey revealed Americans wash their hands more frequently during flu season. This is good, of course, but still not great if for nothing else but the simple fact that germs are everywhere, and if you don’t take the necessary precautions to protect your body, aka wash your hands, you could easily get sick, no matter what time of year it is.

Plus, it’s not just how many times a day you wash your hands (or neglect to) that’s the problem: Per the USDA's latest findings, a whopping 97 percent of Americans aren’t washing their hands properly (if at all) after cooking and/or before eating their food. Researchers analyzed 383 participants in six North Carolina test kitchens, and out of the 1,054 scenarios where hand washing was necessary, not only did study participants wash their hands only about one-third of the time, they did it wrong.

If you haven't been on top of your hand-washing game lately either, rest assured, it's super simple to correct the habit.

Now, you might be thinking, how can someone wash their hands the "wrong" way? I mean, as long as you run your palms under warm water, the germs should wash off, right? Well, not exactly.

One of the biggest mistakes you might be making when it comes to washing your hands is speeding through it, because unless you're actually taking enough time to really get in between your fingers and over your palms, bacteria is going to stick. Think of it like brushing your teeth: When I had braces, my orthodontist gave me a miniature hourglass to take into the bathroom with me whenever I'd brush my teeth. As soon as the brush hit the pearly whites mostly hidden by metal, I'd have to keep scrubbing until the sand ran out to ensure an optimal clean. Similar to this kind of timeframe, there's a certain amount of time you should be spending washing your hands — that is, if you want to be as thorough as possible.

According to the Centers for Disease Control and Prevention, you should wash your hands for at least 20 seconds, lathering up with soap and warm water before rinsing. If you're rushing through the process and skipping soap, those are both red flags that may mean bacteria or leftover food are still lingering on your hands.

And, after you're done washing your hands, it might not hurt to be a bit more mindful of what towel you’re grabbing to dry off. According to the USDA's study, not only were participants washing their hands incorrectly, they were drying them with dirty hand towels which, if you think about it, is pretty counterintuitive. Charles Gerba, a microbiologist at the University of Arizona, told TIME you should be tossing your hand and face towels into the laundry and switching out for a clean one every two days. If you don’t, he told the news outlet, you may run the risk of coming into contact with harmful bacteria like E. coli or staph.

In that case, guys, I’m pretty sure taking a few more seconds out of your day to wash your hands a little more thoroughly is worth it, don’t you?