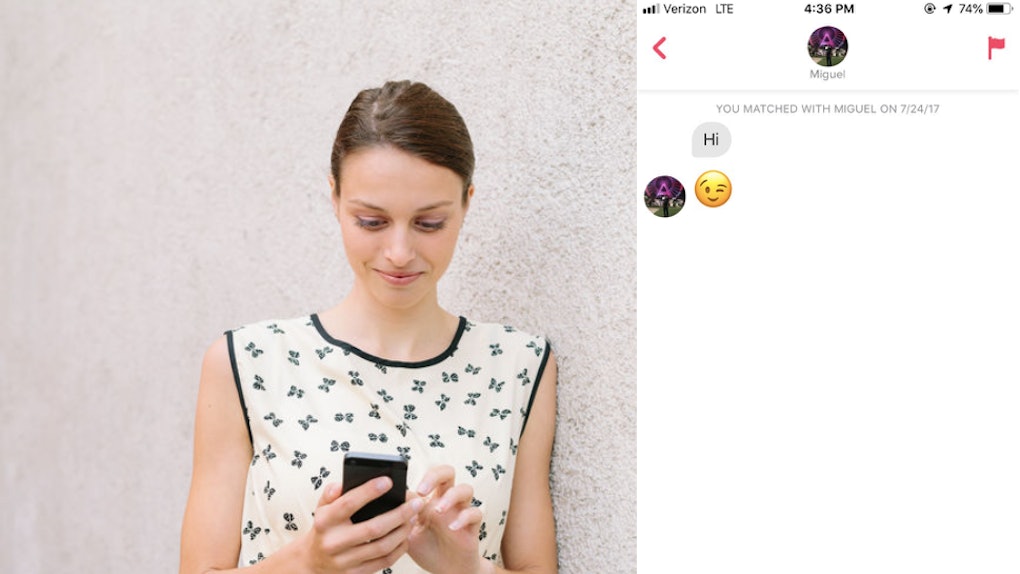 The only thing harder than writing your Tinder bio? Choosing your opening line. You only get one chance to get a match to reply, so if you find yourself typing, "Hi," or "How are you" then you might want to tap that backspace key. A clever or thoughtful opener is far more likely to get a reply, and though I graduated from Tinder five years ago (and recently married the man I met on the app), I like to think that my old go-to opener is still a winner. What's the best opening message to send on Tinder, you ask? Asking their opinion on a topical debate is the way to go.

The problem with using "Hi" and "How are you?" as conversation openers is that — besides being totally lazy — there's little opportunity for your match to engage with you. Sure, you might get a half-hearted reply. For most potential matches, however, that opener won't inspire a response from your matches (or at least not an interesting one). Not to state the obvious, but your opener should allow your match is open up, and since nothing sparks Twitter engagement quite like a viral dispute, why not try the same technique on Tinder?

Now when I say "topical," I don't mean anything involving politics, religion, money, or any other potentially contentious subjects. You may value your match's opinion on the current political climate above all else, but if you jump into something too personal or sensitive too soon, you risk alienating (i.e. freaking out) your match. By topical, I mean whatever hilariously random debate that currently has the internet in a tizzy. From the "black-and-blue versus white-and-gold dress" debate to the "Yanny versus Laurel" conundrum, the internet provides endless fodder for Tinder openings, and it would be a missed opportunity not to take advantage.

Some examples from the summer and fall of 2014, when I was #SingleAndReadyToMingle:

"So have you done the Ice Bucket Challenge yet or do you refuse to succumb to peer pressure?"

"Do you love pretending to care about soccer whenever the World Cup comes around or do you hate on the fake fans?"

"Yes or no: Would you see Sharknado 2 in theaters with me?"

Some of my matches gave lame responses, but the ones who engaged actually helped stimulate some pretty great conversations.

So what would work nowadays? Here are a few responses I've come up with for friends looking to stand out in a match's inbox.

1. "Where do you stand: Did you believe Daenerys Targaryen was always destined to go mad, or did you sign the petition to remake Game of Throne's last season?"

2. "Which celebrity had the most epic cameo in Taylor Swift's 'You Need to Calm Down' video? Go!"

3. "I'm taking a poll: Do you take the time to wash your legs in the shower?"

5. "Which Jonas Brother and J-Sister pairing do you ship the most and why?"

7. "I'm curious: Would you kick Mick Mulaney out of the room for coughing?"

8. "OK, do you think over 30 million people have watched Murder Mystery on Netflix, or are you calling BS?"

Sure, your match may not be as up-to-date on pop culture as you are, but even if they have no clue what you're talking about, I feel pretty confident that you'll get a response regardless.