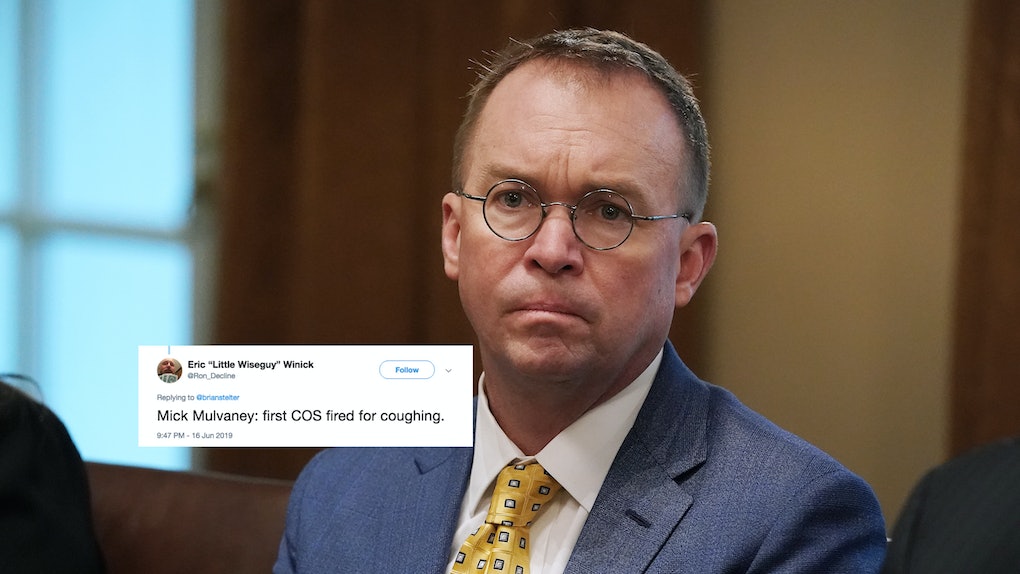 President Donald Trump is known for for a lot of things: his politics, his Twitter rants, and now apparently his serious stance on no interruptions during interviews. On Sunday, June 16, the president sat down in the Oval Officce with ABC News host George Stephanopoulos to discuss his controversial financial records. However, these tweets about Mick Mulvaney coughing during Donald Trump's interview seemed to be the most memorable part of the chat.

On June 16, Trump and Stephanopoulos were in the middle of a pretty serious discussion about the president's financial statements and whether he planned to turn them over to Congress, when the conversation came to a sudden halt. During the interview, Acting White House Chief of Staff Mick Mulvaney had a brief coughing attack which not only distracted Trump, but prompted him to ask ABC News to re-do the question and tell his own chief of staff to leave the Oval Office.

"If you're going to cough, please leave the room," Trump said to Mulvaney. "You just can't, you just can't cough. Boy oh boy."

At Trump's request, Mulvaney was ushered out of the Oval Office and the interview continued. Sure, distractions can be difficult when you're speaking on something that's been a point of criticism during your presidency, but Twitter seemed to think Trump's reaction to Mulvaney was a tad overkill.

While some of Twitter called out Trump's behavior towards Mulvaney, other users believed the chief of staff's coughing was for more pointed reasons. For example, some suggested Mulvaney was trying to tell the president not to answer the question, rather than just trying to clear his throat.

No matter what the context of the cough was, it sure caught Twitter's attention. However, once Mulvaney left the Oval Office, Trump got right back to business and told Stephanopoulos that he would like to make his financial statements available to Congress, but claimed it wasn't up to him. Stephanopoulos pressed Trump that it was ultimately his decision, but Trump insisted that turning the documents over was up to his lawyer, and up to "everything else."

Trump's refusal to turn over his tax returns to Congress has long been a point of contention. His failure to disclose his returns publicly ahead of the presidential election breaks long-standing presidential tradition, making him the first president since Jimmy Carter not to do so, according to The Washington Post. Meanwhile, Democrats have insisted that he turn over his financial records, even going so far as to subpoena the Treasury Department for them. Secretary of the Treasury Steven Mnuchin has also refused to hand over the documents, and sent a letter to House Ways and Means Committee Chairman Richard E. Neal that stated the committee's actions could "have lasting consequences for all taxpayers." Elite Daily reached out to the White House and Neal for comment on the letter, but did not hear back in time for publication.

While many political officials believe it's imperative that Trump hand over his tax returns, the president doesn't seem to think there's any rush. He's made numerous excuses why he won't release the information, one of them being that he was unable to because he was under audit. However, on April 9, Internal Revenue Service Commissioner (IRS) Charles Rettig stated that rule doesn't exist. Trump has also claimed that the public isn't interested in seeing his financial statements, which, judging by the number of tweets around, doesn't actually seem to be the case.

Even in the most serious of circumstances, Twitter will always have an eagle eye out for those awkward moments. Let's hope Mulvaney was able to drink some water and recover from the coughing fit, and doesn't do it again during the next interview.