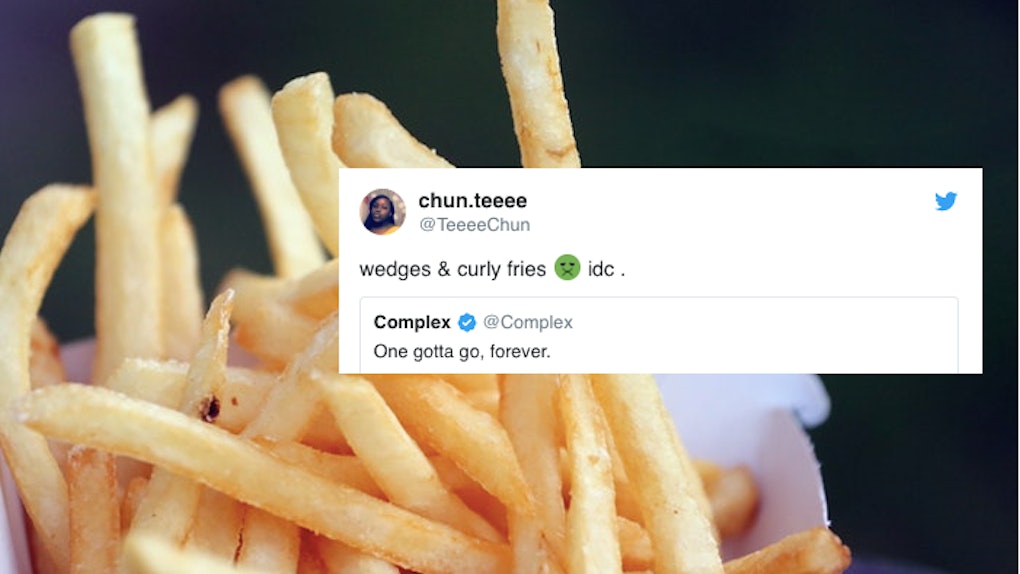 These Tweets About French Fry Type Preferences Has Twitter Torn

Along with a variety of political issues, Yanny or Laurel, and the gold or blue dress, one of the most debated topics of all time has to be the best — or worst — type of french fry. Between crinkle cut, waffle, steak, and curly, there are so many delicious options. But alas, one of them is definitely the weakest link, and nobody can decide which it is. And if you haven't yet seen these tweets about french fry type preferences, they have Twitter totally torn. I — personally — am in a total tizzy about it all.

Wednesday, May 8 started out as a typical and totally run-of-the-mill spring day. That is, until pop culture hub Complex threw out a highly controversial tweet that sent hardcore fry fans into a fuss. The post features four of the most popular types of french fries, including renowned crinkle cut, seasoned curly, crispy waffle — and last but not least — juicy steak fries. The caption read, "One gotta go, forever." But how does one simply decide which type of french fry has to go? Forever and ever? I can't even begin to think about which fry would have to go, but make sure to check out the original tweet that started it all, below. It'll really get you thinking.

In my eyes, picking one to banish from the realm of french fries seems totally impossible. But as you would probably imagine, it sparked a ridiculous amount of contention. To start, the crinkle cut haters definitely brought a lot of heat to the discussion.

While exiling crinkle cut is definitely unthinkable to many, others want to cut out the curly fry, and honestly, I'm offended. Between its whimsical shape and delectable seasoning, I couldn't even consider getting rid of the fun n' fresh curly fry. But hey, some heartless fry-eaters out there totally would... SMH.

If you really want to see people get heated, though, check out the heartless folk that would eliminate the waffle fry. How can one resist those crunchy crevices — and most importantly — their gigantic size? I couldn't imagine life without these babies, but it looks like some definitely could.

Last but not least are the steak fry haters. I'm morally opposed to ever getting rid of the steak fry, or wedge fry — whatever you prefer to call them. All I know is they totally rule and eliminating them for life is 100% unthinkable.

OK, but apparently Chance The Rapper agrees with the steak fry haters, and now I'm totally torn? Now I feel like I should change my mind. TBH, I feel judged.

Wow, Chance just delivered so much shade and I feel attacked.

The french fry debate is way too much for me to handle right now. Honestly, I really don't think I could ever eliminate any of them. Let's face it, y'all: every french fry is a winner.