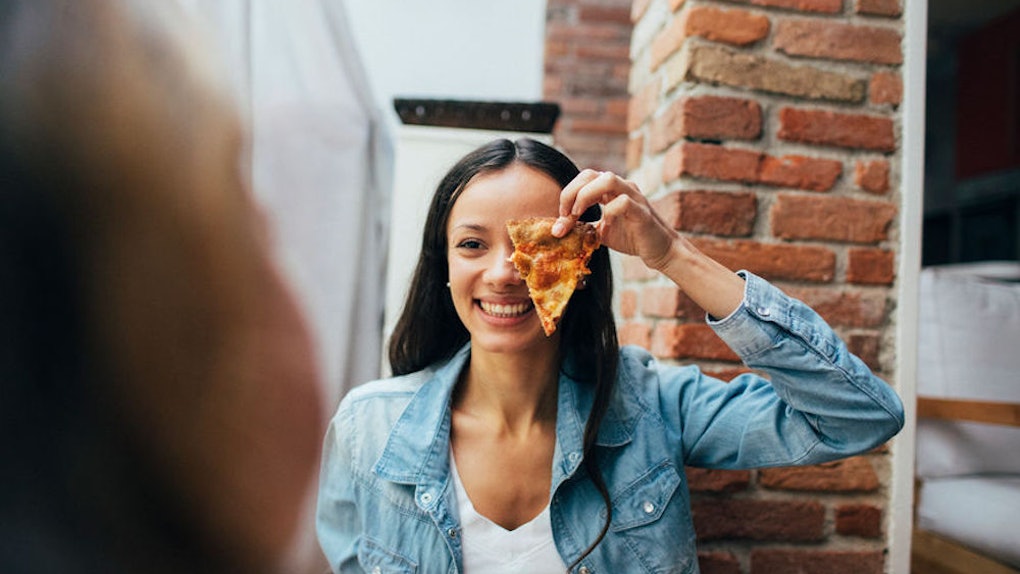 The 10 Best Cities In The U.S. For Pizza, According To TripAdvisor

I scream, you scream, we all scream for — wait, that's not right. Is there a catchphrase for pizza? If not, there definitely should be, because you can't live without it. It's your favorite thing to eat on Friday nights, and one of the top reasons why you and your bestie became friends. She was sitting at one table, and you were at the other, and you bonded over your love for chewy crust and perfect slices of mozzarella. Now, you're determined to try as many pies around the country as you can — together, of course. The best cities in the U.S. for pizza, according to a recent report by TripAdvisor, are worth the trip. Grab your home slice and go. (You two really don't have to be told twice.)

For as long as you can remember, you've been obsessed with the 'za. You've tried recreating some of your favorite pies, grabbing those gourmet ingredients or slices of pineapple from the grocery store on your way home from work. You've followed detailed recipes, and maybe even taken a cooking class to perfect your tossing skills. Your bestie was there for it all, and has that homemade tomato sauce down to a science. (Phew! That's as #necessary as the cheese that goes on top.)

Now, you wouldn't typically share a slice, or even a whole pie. Like Joey from Friends, you're just being realistic on that one. But, traveling to the best cities for pizza with your bestie is a must. Appetite: required.

New York City, or "The Big Apple," is known for a lot of things, from skyscrapers to iconic locations from Sex and the City. Of course, pizza is another item on that list. In fact, if you live there, you probably know of at least a few parlors right on your block that are open well-past midnight. Thank goodness, because you never know when that craving is going hit!

Out of every pie in the city, the one you can order at Bleecker Street Pizza is the most renowned. According to TripAdvisor, this spot has homemade sauce that make you feel, well, right at home! Just head to the West Village, OK?

Nobody does pizza quite like Chicago — at least that's the impression you get when you first try a slice of deep-dish. (Take it from me on this one.) Suddenly, everything you knew and loved about pizza is changed, as you get lost in the layers of sauce and cheese. Don't order too much, because it's awfully filling. But if you're in the city, make sure to stop for at least one slice. Lou Malnati's Pizzeria is supposed to be incredible.

What have you heard about Las Vegas? Probably something related to the grand hotels, palm trees, and bright lights that line the strip. What everybody forgot to tell you was that this city is one of the best for some 'za.

Maybe you wouldn't expect it, but TripAdvisor revealed that Pizza Rock is top-rated and ready for your arrival. Just book a flight and prepare to be blown away by the neon signs, electric energy of a city filled with entertainment, and the slice that leaves you wanting more.

Between the coffee shops and donuts in the Pacific Northwest, and the pizza in San Francisco — you could do an entire tour just based on food. (Yes, please!) You can hop in a camper-van and drive down the Pacific Coast Highway, catching the Golden Gate Bridge and the Painted Ladies along the way. And when you inevitably get hungry, stop at Tony's Pizza Napoletana for a legendary pie.

Booking a trip is a must for Disney fans who want to eat ice cream shaped like Mickey Mouse, but it should also be a destination for the girl who's obsessed with pizza. Let's be honest: You're getting tired of the usual places around you and need a change in scenery. Spend an afternoon roaming around the Magic Kingdom to spark your soul, and then take an adventure to Red Oven Pizza Bakery. This city is more than just an iconic theme park with fun characters, and it has the pizza to prove it.

The corners of this country have a lot to offer, and really are completely different when you think about it. I mean, New England is full of rocky beaches and orchards where you can get apple cider in the fall. And the Pacific Northwest is full of evergreen trees, landmarks like the Space Needle, and pizza.

You'll want to book a trip to Seattle ASAP to see the sights and stare in awe at Mount Rainier. Grab a slice at Serious Pie, too. According to Trip Advisor, it's one of the best in the bizz.

You don't have be a huge sports fan to visit Boston and appreciate its culture. Truth is, every city has something they're super passionate about — and the architecture of the brownstone apartments and rich history of this spot on the East Coast gives it its essence.

Now, the rivalry between New York and Boston has always been pretty tough, whether it's a matter of baseball or the best pizza in the game. You're just going to have to go to Regina Pizzeria yourself and let the world know what you think. Afterwards, head to Fenway Park or stroll through the North End. Did someone say cannoli? That's next on the list of things to eat.

Find yourself in San Diego if you're in serious need of sun, surf, and some really good pizza. (Honestly, what more could you ever need in life? The answer to that question seems pretty clear to me.)

According to TripAdvisor, the place to go is Filippi's Pizza Grotto, where you'll find great food at a pretty average price. From the second you get to this city in Southern California, you'll want to hit the beach and then never leave. The West Coast is the "best coast" for a reason, and if they have the 'za, then it's seriously a no-brainer. You're moving here.

Can all the Queer Eye fans please stand up? You may have heard of Atlanta before Jonathan Van Ness started hair flipping and changing people lives for the better. But, thanks to the show, it's reached the top of your bucket list.

You want to explore all over Georgia, and maybe spend a little time in the city of Savannah, too. Just do me a favor and grab a slice at Antico Pizza Napoletana before you hit the highway for some more sight-seeing.

Last but not least, head to the capital city of the U.S. for a slice with your bestie. In the springtime, this place is known for its beautiful cherry blossoms, and year-round the Smithsonian museums are the place to be. But, sight-seeing will for sure make you hungry, and that's when the 'za comes in.

Thanks to TripAdvisor, you know exactly where to go: Pi Pizzeria. Order a deep-dish before you check out the monuments, or just get something cheesy before exploring around the National Mall.