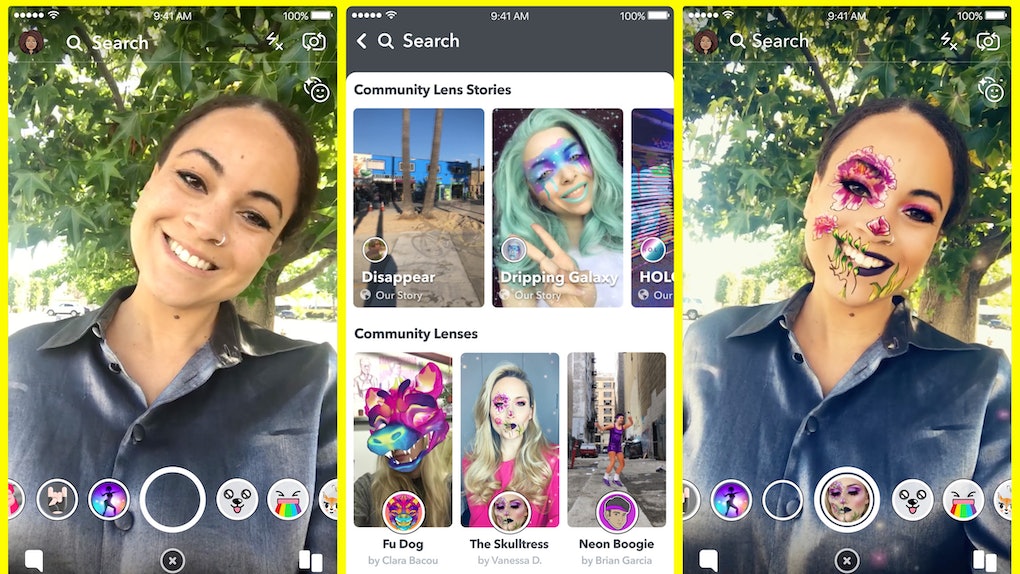 New Snapchat Lenses are on the way, so get ready to have even more fun using the face-altering feature. The social media app is rolling out a brand new set of Lenses made for you (and by you). Snapchat is expanding the reach of their community-created face and world Lenses to users, but not everyone will have immediate access to the thousands of Lenses that were developed by Snapchat's global creator community. Get ready for a flood of selfies, because Snapchat's Lens Explorer lets you unlock original lenses, and the options are awesome.

Snapchat's Lens Explorer lets you browse thousands of filters produced by users just like yourself. In 2017, Snapchat launched their Lens Studio: An online space where Snapchatters can be creative and develop their own augmented reality experiences. Now, iOS users can have easier access to those interactive Lenses, thanks to Snapchat's Lens Explorer that launched on Tuesday, July 10. This is the first time that Snapchat has made the Community Lenses available next to the main Lens Carousel in the app, according to Snapchat. Since the conception of Lens Studio, creators have submitted over 100,000 unique Lenses, which have been viewed over 2.5 billion times, according to Snapchat. So, it is safe to say that there's no shortage of awesome new filters to choose from.

To find a Snapchat Lens developed by a community creator, open up the Snapchat app on your mobile device. You can easily launch Snapchat's Lens Explorer by tapping the new smiley face icon that shows up when the Lens Carousel is in use. Tap on a Lens tile to unlock the Lens of your choice. It will open up directly in your Snap Camera for you to play with, or you can peruse through the featured Our Stories section in the app. You can also unlock a lens by swiping up on Snaps in these Stories. Additionally, users can browse Lenses created by fellow Snapchatters using the app's Search function.

Augmented reality experiences seem to be a growing trend in the Snapchat app. Recently, Snapchat rolled out a way for users to play tennis against Serena Williams in the app, as well as a way for users to play with some of their favorite theme park characters at Disney, Universal, and Six Flags amusement parks. In May, Snapchat introduced sound-activated lenses for users to toy around with. Up until then, Snapchat's lenses solely relied on a user's facial expressions to control the lens.

Lenses are one of my favorite features of Snapchat, so, needless to say, this is welcomed news. If you're one of the 70 million people who use Snapchat Lenses on a daily basis, you probably feel the same way I do. Now, Snapchatters (myself included) will have even more choices when it comes to having a good time and expressing yourself within the app. Sadly, Lens Explorer is not available to all users just yet. For now, the new feature is only accessible for iOS users starting on Tuesday, July 10, according to Snapchat. The rest of us are going to have to practice a little patience for now.

Like most new app functions, this one is going to take a while to reach all iOS users. If you already have Snapchat's Lens Explorer, consider yourself one of the lucky ones. If you don't have it quite yet, head over to your iOS device's app store to make sure you are running the latest version of Snapchat. Otherwise, sit tight, because it is going to a slow rollout. Lens Explorer seems to be just what my Snapchat experience was missing, so I am confident that it is going to be worth the wait.