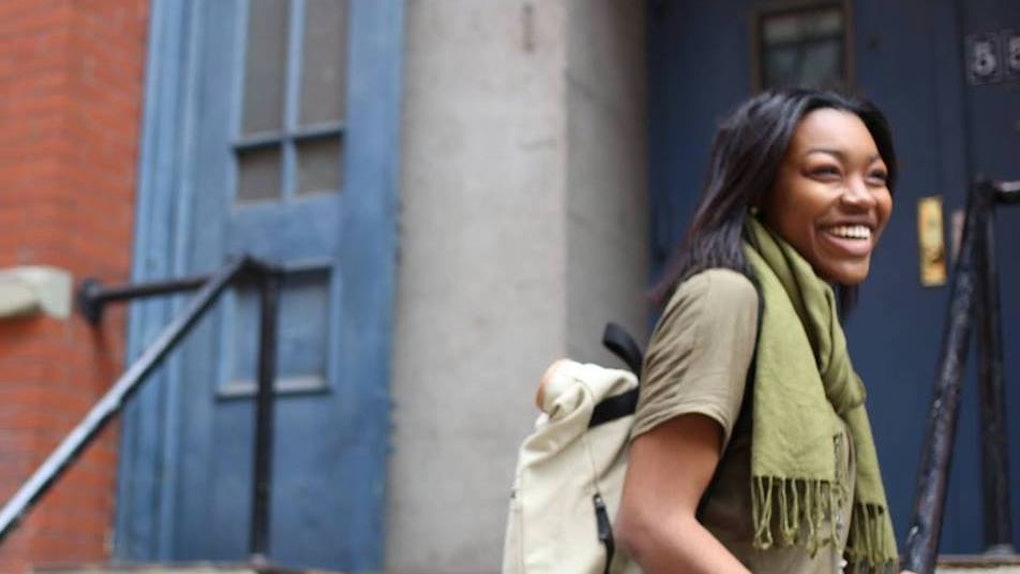 When I was a teenager, I would scour each issue of Cosmopolitan, my mouth hanging wide with disbelief at the horror stories about sex. I would laugh so hard that tears would form in my eyes — I couldn't believe how ridiculous some of the stories were! There were essays from women who had accidentally dated their cousins, thrown up on the first date, had to call 911 during sex, you name it. Little did I know that years later, I would end up calling an Uber straight to the hospital after a date night gone so, very wrong. Yup, sex with my date sent me to the ER — and I lived to tell the tale.

It started out very innocently. I went to dinner at an upscale Italian restaurant with this guy I had been casually seeing for a couple of months. We ordered burrata to start and a huge pizza for us to share, while talking for hours and getting to know each other better. When the check came, we didn't want to cut the evening short, so we decided to get tickets to see Bohemian Rhapsody. We had an hour and a half to kill, so we decided to go back to my apartment. Playful kisses led to affectionate caresses, and we ended up having an impromptu quickie before heading out. I don’t know if it was the red wine at dinner, the mounting sexual chemistry that emerged throughout the night, or a combo of the two, but things definitely got hot and heavy — fast. We commended each other for having our pants back on and shirts buttoned up just in time to get to the theater before the movie began.

As soon as we sat back down in our seats, I knew something was wrong. Sharp, stabbing pains began to attack the left side of my abdomen, and I instinctively grabbed my body where I felt the discomfort. I darted to the bathroom, hoping the feeling was just some intermittent gas from dinner. As soon as I sat down on the toilet however, every pelvic muscle in my body seemed to grow tense with unbearable pain. It felt like an invisible Wolverine decided to dig his claws into my uterus and grab on for dear life. I had endured pain before, but this was next level. What worried me more than the pain was that it was seemingly random; I could not pinpoint the source of the agony.

As someone who has always suffered from painful, heavy periods, I have developed a pretty high pain tolerance over the years. As a black woman, the excruciating routine of having my 4C hair detangled (and then the burn of relaxers that followed as a teenager) led me to believe that enduring pain was just part of being a woman. After unsuccessfully attempting to feel any relief, I flushed the toilet and prayed that the pain would just go away on its own. Then, I went back to catch the end of the film.

Somehow, watching Queen’s ascent to fame seemed to momentarily quell the pain. In fact, I almost forgot about it all together — until I tried to get up from my seat. Once again, each abdominal muscle tensed up as I tried to use them to stand. I had to keep my torso still as I used the strength of my legs to lift my body. The growing incompetence of my body horrified me; I felt powerless. Hunched over, I grabbed onto my date’s arm as I tried to downplay the extremity of my discomfort as we left the theater. "They’re just really bad cramps," I assured him. He appeared concerned, but I convinced him that I was fine. We ended the evening then and there, and I rushed to get home.

When I got back to my apartment, I asked my roommate for some Advil to help mitigate the pain. When the painkillers did not do enough to relieve my anguish, I racked my brain for what I could use that might be more effective. I didn’t own a heating pad or a hot water bottle, but I did own a vibrator from Unbound Babes, which was about the size of my palm; it was going to have to do. I pressed it against my lower stomach where I felt the pain, and the vibrations seemed to mildly dull the agony for the time being. I eventually fell asleep, with my vibe still pressed up against my abdomen.

When I woke up the next day, the pain had centered and become more severe. Not only had it intensified overnight, but it had also spread from my pelvis area to include my entire abdomen. I couldn’t move to the left or to the right, and struggled to roll myself out of bed. I took three bites of toast before feeling nauseous and feverish. My roommate took one look at me and declared, “I’m taking you to the ER.”

As a kid, I had never broken a bone in soccer practice or after recklessly climbing a tree. In college, the worst ailment I had ever come down with was an unfortunate bout of mono that had gotten me out of taking my sophomore year finals. I didn’t know what was causing the horrible, searing pain, and after trying to ride it out all night, I took my roommate’s advice and called an Uber to the hospital.

I sat in the waiting room for four hours, writhing in horrible pain, before finally being admitted and seen by several doctors. After asking me about my family history and medical past, we moved on to my sexual practices. Once I told them that I had been seeing someone consistently but that we were not exclusive, something seemed to click in their heads. I watched as each doctor individually inferred that my pain seemed to stem from personal negligence in my sexual health. Thus, my requests to have an ultrasound done were dismissed and deemed unnecessary.

After eight hours, the doctors had made up their minds. One seemed to think that I had some sort of sexually transmitted infection that had gone untreated; the other was sure that my body was cramping up from “too much sex.” All of the conflicting diagnoses befuddled me. But before I had time to process, I was discharged. My "treatment" was to take some Advil and rest for a couple of days. I went home with the same questions (and pain) that I had when I had arrived.

Although the severity of my symptoms lessened over the next few days, I couldn't shake the feeling that the doctors hadn't gotten to the root of the problem. I had to know for sure what was wrong, so that I could prevent it from ever happening again. So, I did what any curious woman would do in my situation: I asked another woman.

According to the U.S. Department of Health & Human Services, an ovarian cyst is defined as a sac filled with fluid located in the ovary. Ovarian cysts can be incredibly common for anyone who regularly gets their period, and are usually harmless, coming and going without many symptoms. In fact, such cysts are usually only noticeable when something goes awry, because of the pain they inflict.

“Typically, ovarian cysts should only be two to three centimeters wide — yours is about double that, at six,” Dr. Shultis told me. She asked if I had been doing any strenuous activity the day it burst. I looked at her sheepishly, before admitting to some horizontal exercise between dinner and the movie.

According to the John Hopkins University School of Medicine, “strenuous exercise or sexual activity” are common instigators for rupturing large cysts. “Intense abdominal pain, bleeding, dizziness, nausea, low-grade fevers” are also signs of a ruptured ovarian cyst, fertility specialist Dr. Gavin Sacks tells Elite Daily. If you suspect you have an ovarian cyst that has ruptured, you should see a healthcare professional at your earliest convenience. If big and painful enough, some cysts may require surgical removal. And if left untreated, a ruptured cyst can cause severe bleeding and medical complications.

My gynecologist told me my cyst was not big enough to require surgery, and thus, the only solution was to rest and let it heal on its own. I returned to work after two days, and took painkillers for the following week as the pain slowly subsided.

After keeping my date in suspense for hours, I texted him the abbreviated version of what had happened. He was extremely remorseful and kept in touch, in order to track my progress over the subsequent days. I teased that he would forever be known as "the guy whose d*ck sent me to the hospital" and it’s remained an inside joke between us ever since. While we continue to laugh about it and are still in contact, I’ve taken a break from dating because of this incident.

Since I was unaware of my oversized cyst to begin with, I still feel a little wary of having sex again so soon after the fact and reliving this traumatic experience. Thankfully, my date was someone who I had gotten to know over the course of a couple of months, and while we had been sexually intimate throughout our time together, I had felt very comfortable with him. I will probably wait until I reach a similar level of comfort with the next person I date before we have sex.

I always knew dating could come with the risk of pain — from a broken heart, mixed singles, bad timing, etc. But the one thing no rom-com could have ever prepared me for was a surprise trip to the ER.