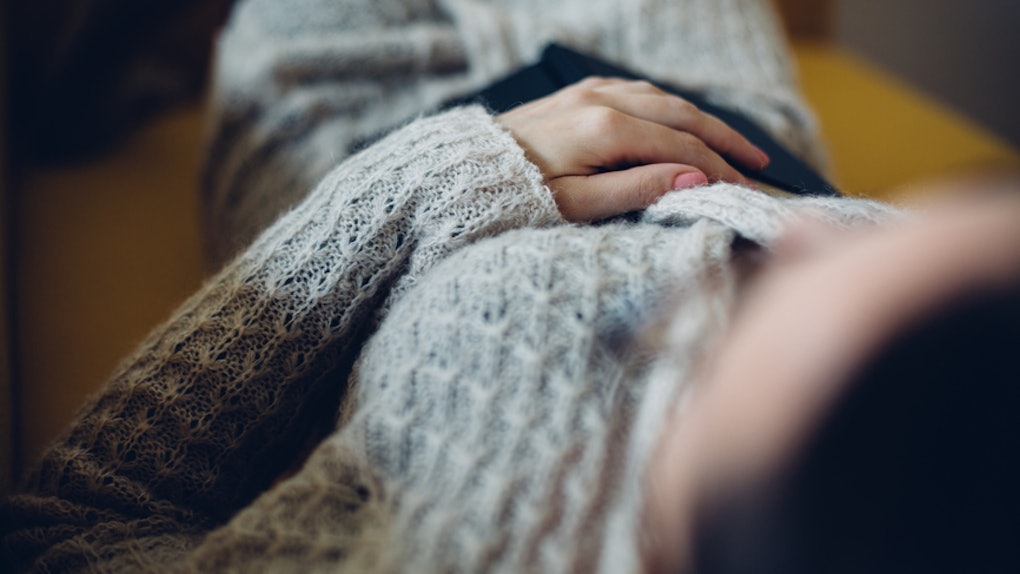 Why Is My Period So Heavy? Experts Say These 5 Things Could Be Playing A Role

Anyone with a uterus will tell you no two periods are identical. Every female reproductive system adheres to its own monthly cycle and brings along with it an individualized set of symptoms based on your unique body. Your sister, for example, might have a light flow, while you’re going through tampons like they're your favorite tube of mascara. This is just another example to add to the pile of why being a woman isn’t always fair, because seriously, why is your period so heavy, while the rest of the world can do back-handsprings and swim marathons when they're flowing?

Before I dive into the details on why you might be experiencing heavy periods, let's talk about what it actually means to have a heavy flow. Dr. Rachel Zigler, an OBGYN in Missouri, and a fellow for Physicians for Reproductive Health, tells Elite Daily the term is actually quite subjective. To determine whether or not your flow is clinically considered "heavy," Dr. Zigler says, your gynecologist will first take into consideration whether or not "you soak through a pad/tampon every hour for several hours, need to wear more than one pad at a time, or bleed for more than seven days."

From there, the question is whether or not the "heavy" bleeding is clinically considered "normal" or "abnormal." According to Drs. Hedieh Asadi and Gunvor Ekman Ordeberg, of DeoDoc Intimate Skincare, most women will shed around one to 1.5 ounces of blood during their period. These experts tell Elite Daily that "more than 2.5 ounces is considered heavy menstruation, or menorrhagia."

Of course, the absolute best way to determine whether or not your heavy flow is cause for concern would be to talk to your doctor about it. But, for now, if you want to get a better feel for what could be going on down there, here are some possibilities to consider.

1. It's Just Your Body's Version Of A Natural Flow

Some people are heavy bleeders, point blank. In fact, according to Dr. Jessica Shepherd, an OBGYN and U by Kotex partner, bleeding heavily during your period is "fairly common." According to research on the subject from 2017, nine to 14 out of 100 women experiences a heavy period on the reg. Basically, Dr. Shepherd tells Elite Daily, if your flow is on the heavier side with each cycle, this is probably just your body's natural way of menstruating.

Of course, you don't have to endure the excessive bleeding and go through boxes upon boxes of tampons every single month. Dr. Shepherd says these types of flows can be controlled "by switching up or going on birth control." If that's something you're considering, make sure you talk to your OBGYN to explore your options.

2. You've Got A Lot Of Estrogen

Ah, hormones — can't live with 'em, can't live without 'em. But I think I speak on behalf of most women when I say we could definitely do without their erratic fluctuation. See, according to the Women In Balance Institute, during menstruation, a woman's estrogen and progesterone levels typically lay low. If your estrogen levels skyrocket, however, some interesting stuff can happen to your body as a result.

In an exclusive interview with Elite Daily, Alisa Vitti, author of WomanCode and a women's hormone and functional nutrition expert, says that, when your estrogen is on overload, "the lining of your uterus can become thicker." This can happen, she explains, when your diet contains estrogen-rich foods (such as legumes, sesame seeds, soy, and certain nuts), and it can also happen "when your liver is not able to keep up with detoxification" — i.e. when your liver is struggling to absorb and break down nutrients. Basically, you are what you eat, and so are your hormones. Again, be sure to address these concerns with your gynecologist to see what changes in your diet or lifestyle might be best for you here.

3. It Could Be A Thyroid Issue

According to Vitti, you'll know when excess bleeding during your period is a red flag for hypothyroidism because, on top of your heavy flow, there will be a whole lot of other symptoms to tackle, as well.

"If you notice you have a lack of appetite, are gaining weight, feel cold, and are fatigued easily," Vitti tells Elite Daily, that could mean your thyroid isn't functioning properly.

In other words, don't hesitate to check in with your doctor to make sure everything's copacetic, and to chat about what options are available to you if you do have an underlying health condition like hypothyroidism. Vitti also suggests using the MonthlyFlo app to help you adjust your lifestyle and eating habits in a way that will cater to your individual flow.

4. Uterus Polyps Are A Possibility

Generally speaking, a heavier flow could be your body's way of reacting to things like stress or hormonal changes, but Dr. Shepherd tells Elite Daily it's always a good idea to make an appointment with your doctor and request an MRI, ultrasound, or biopsy of the uterus to cancel out any underlying, potentially-more-serious causes.

When noticing such a drastic change in your flow, take note of how fast you're soaking through things like tampons and pads. If you need to change them "in less than an hour," Dr. Shepherd explains, "it could be an indication that you have polyps in your uterus or uterine fibroid."

In case you don't know, polyps are abnormal tissue growth inside the uterus, and clots or heavy period bleeding can be a sign of the condition. Generally speaking, polyps aren't cancerous, but in some cases, they can develop into a cancer. Polyps and fibroids are very common, Women's Health reports, with 70 percent of women likely to experience at least one before they turn 50.

5. Depending On Other Symptoms, You Could Be Anemic

If your period is becoming increasingly heavy, there could be more to the story than just an unusual flow. Ann Mullen, director of health education for Cycle Technologies, explains that a heavy flow — one that causes you to go through maxi pads or large tampons in one or two hours' time, and that lasts more than seven days — is a potential sign for anemia. According to Mayo Clinic, excessive or prolonged menstrual bleeding reduces the number of red blood cells, which is exactly what anemia is: a deficiency of red blood cells.

Under these circumstances, Mullen tells Elite Daily, it's important that you address these symptoms with your doctor ASAP. To ensure you're aware of what's normal for your body, she adds, document your monthly experiences in a journal or period-tracking app, like Dot, to be able to clearly identify these red flags.

More like this
These 40 Clever Vaccine Selfie Instagram Captions Deserve A Shot On Your Feed
By Rachel Chapman
The Netflix Reality Show You Should Watch, Based On Your Zodiac Sign
By Chelsea Jackson
15 'Schitt's Creek'-Inspired Mother's Day Cards On Etsy For The Moira In Your Life
By Rachel Chapman
Stay up to date