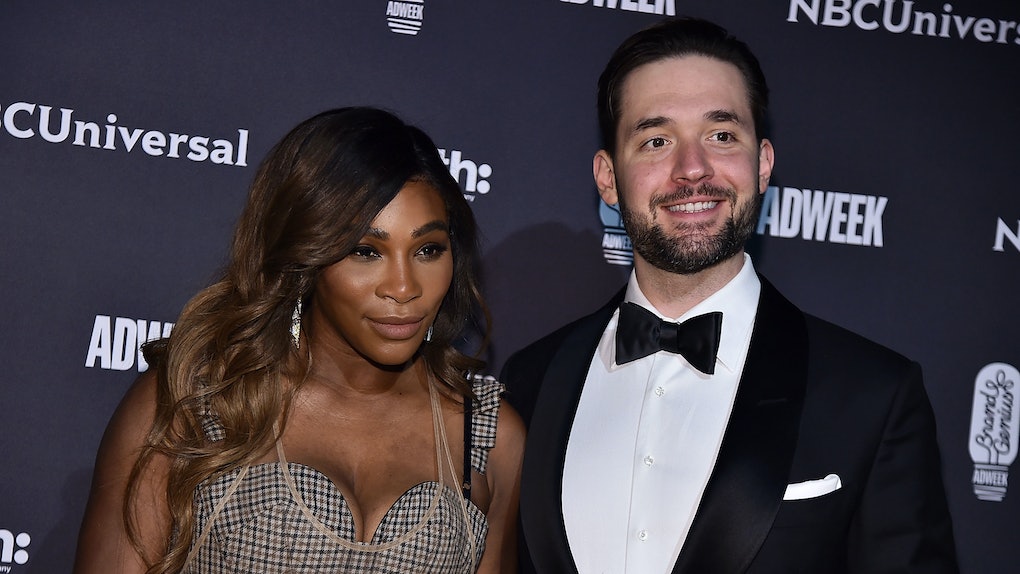 Serena Williams and her husband, co-founder of Reddit and Initialized Capital Alexis Ohanian, have been head-over-heels in love for three years, and it's no secret. Their wedding photos appeared in Vogue and their baby girl, Alexis Olympia, has her very own Instagram account where loving fans can keep up with her growth and adventures. (It's really freaking cute.) It's pretty clear these two are riding high on the happiness train, but Serena Williams' quotes about Alexis Ohanian in her Allure interview make it even more evident. What the tennis champ (and GOAT) said about her man is proof that their relationship is one full of support, team work, and most importantly, lots of love.

In the interview, she talked about her family, her career, and how she got to where she is today. And when it came to talking about Ohanian, Williams certainly did not disappoint. Before she met him, there were countless rumors about who she may or may not have been dating, but she always kept her romantic life pretty private, and she wasn't exactly looking to meet her forever person when Ohanian stumbled into her life.

"It just hadn’t happened, and I really didn’t think about it much," Williams said in her interview. "I was so committed to my job, and to being the best and working the hardest, and I think I still am. Not to knock anyone else I was with before, because they were all mostly amazing, but I know now I can be selfish, have a great career, and a great partner, someone that believes in me." D*mn right you can have it all, queen!

She continued. "Oprah said, 'Never let anyone dim your light.' That really stuck with me. Alexis doesn’t dim my light. He doesn’t try to dim my light. He puts me in the light, even if I don’t want to be. He pushes me to further points I never thought about. It always was something that I could see in some relationships — my light would be dimmer. Now I feel like I can shine really bright and still do everything that I want to do." How amazing is that? No one should ever make you feel dimmer. You should feel like you shine even brighter because of your person, and Williams found just that with Ohanian.

ICYMI, their love story began in May 2015 when Williams and Ohanian were both staying at the Cavalieri hotel in Rome, Vanity Fair reported in Williams' August 2017 cover story interview. Williams was there for her first match in the Italian Open and Ohanian was speaking at the Festival of Media Global Conference. They met sitting poolside, and hit it off. Nothing happened immediately, but two months later, the couple had their first date: a six-hour walk around Paris. (Talk about dreamy!) They continued dating for about a year and a half when Ohanian decided to propose to Williams in December 2016, in the same place they met. Hello! Goals!

After the proposal, Williams took to Reddit to confirm their engagement where she blessed the world with the cutest poem ever. "I came home/A little late/Someone had a bag packed for me/And a carriage awaited/Destination: Rome/To escort me to my very own "charming"/Back to where our stars first collided/And now it was full circle/At the same table we first met by chance/This time he made it not by chance/But by choice/Down on one knee/He said 4 words/And/r/isaidyes." Does it get any cuter than that, honestly?

In January, Williams found out she was pregnant right before the Australian Open. She handed Ohanian a bag with six positive pregnancy tests and went on to win the match. (Again, GOAT.) That September, Williams and Ohanian welcomed their baby girl Alexis Olympia Ohanian Jr. Two months later, the couple tied the knot in New Orleans, and have seemingly lived happily ever after since.

If these quotes didn't make you feel all the feels, read 'em again! Williams and Ohanian's love story is too cute, and if her quotes about him are any indication, this is a couple that's built to last.