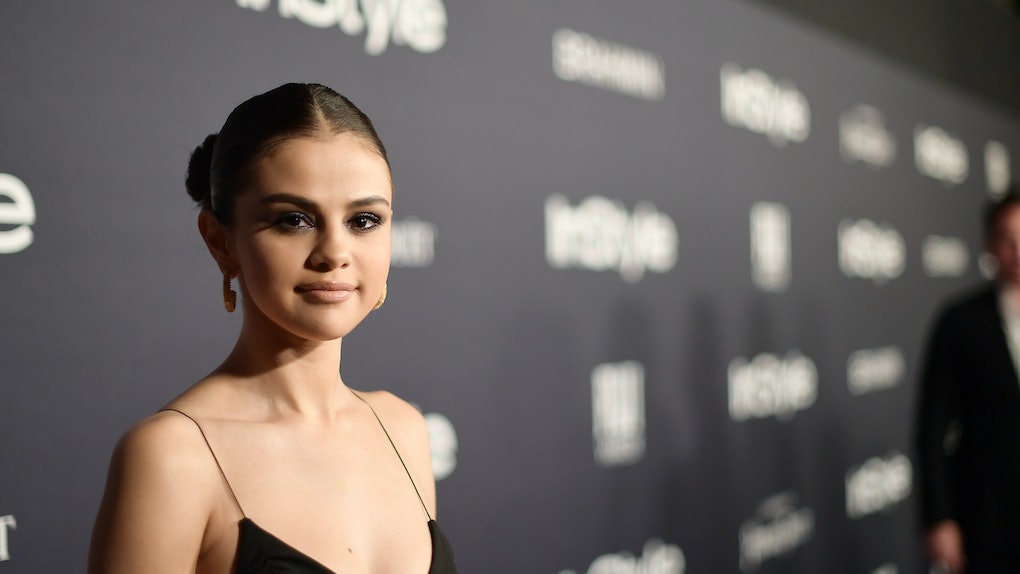 Friday came early this week, y'all! Selena Gomez decided to bless fans on Wednesday, Oct. 25, with her new song "Wolves," a collaboration with DJ Marshmello. The 25-year-old singer dropped the song at noon ET and fans are already obsessed. If you want to listen to Selena Gomez's "Wolves," then keep scrolling because we've got you covered. It's sensual, sexy, and will make you wanna move your hips to the beat and dance. I hate moving (exercise sucks, am I right?), but even I'm feeling it.

Gomez has been teasing her new hit on Twitter for a full week now. On Oct. 19, the star shared a couple of images on Twitter of her sitting with Marshmello eating popcorn and hanging out. Although she didn't announce her single at the time, it was clear to fans Gomez and Marshmello would be collaborating on some kind of new music.

Eventually, Gomez shared the news with fans on Oct. 23 and said her "new song" would be coming out Wednesday, Oct. 25. Obviously, everyone freaked out and started tweeting theories about WTF "Wolves" would be about.

According to Gomez, the song is extremely "personal." In an interview with Beats 1 posted to Twitter, the singer told Zane Lowe,

This was a song that I heard in Japan for the first time and I was talking to Andrew Watt who is one of the writers [who I] worked with for years and he actually just played a rough version and I thought it was really beautiful and he sent it to Marshmello and we ended up talking... we created a really cool tone and a story with it, and the song is very beautiful and personal and the lyrics just have, you know, a whole story of its own... weirdly at the same time I was working on it in Japan and going through stuff too, so it's mirrored everything.

If you've read the lyrics, you'll know "Wolves" is very emotional, personal, but also romantic AF. The song opens with:

Yeah, SEXY. But just wait for the chorus:

Of course, when you read the lyrics, I'm sure your mind immediately thinks of Selena Gomez's relationship with The Weeknd. The song very much could be about her current love life, especially because it has lines like "I wanna feel the way that we did that summer night," and "Your fingertips trace my skin to places I have never been." Here's the second verse, in case you're aching for more:

Break down these walls and come on in

Hopefully Gomez opens up about the meaning of "Wolves" soon so we know what this is really about. Thanks for giving me another great song to cry to, Selena!