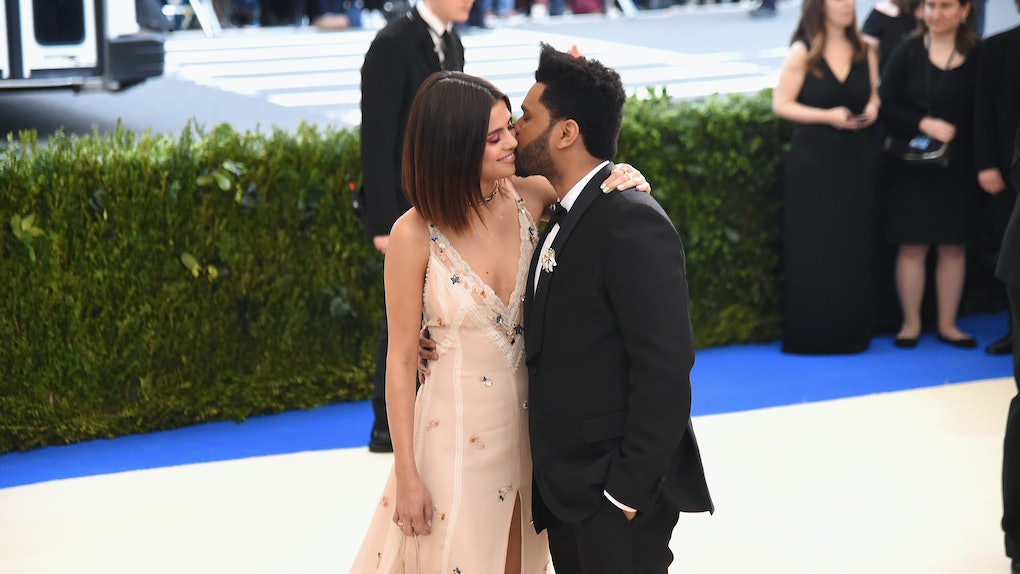 Is "Wolves" About The Weeknd? Selena Gomez's New Song Lyrics Are So Romantic

Selena Gomez released the lyrics to her newest single "Wolves" and it's only made the world more excited for the actual release. The biggest surprise was that the song is so, so romantic. The lyrics are all about falling in love and searching for your perfect mate which is leading fans to ask, "Is 'Wolves' about The Weeknd?" Totally understandable question.

Although the full song isn't released, the lyrics definitely point to Gomez's very public boyfriend. According to the early preview, the "Wolves" lyrics say,

"Wolves" will be the the third single Gomez releases this year. The collaboration with music producer and DJ Marshmello had fans double excited for the drop. The fact that "Wolves" could also be about The Weeknd may be too much for the internet to handle.

It's totally possible the super sexy lyrics could be about the "Starboy" singer.

Although they weren't linked romantically until January of 2017, Gomez and The Weeknd (real name Abel Tesfaye) met when they both performed at the Victoria's Secret Fashion Show in 2015. He was dating Bella Hadid at the time, so their first encounter probably wasn't love at first sight.

It kind of tells a story. It's that feeling when you're obsessed with someone, when you first initially, I always say the 'honeymoon stage,' and I'm a sucker for that feeling. It's the best feeling in the whole world. I think that feeling, you can't get them out of your head, you're willing to want to dress differently, you want to be differently. It's not what I'm encouraging, it's more about that feeling that you can't keep it cool.

She revealed the song was written about a year ago, leaving people to question whether it was about The Weeknd, since they've been dating for less than a year. But when you consider the fact that they met in 2015, it's totally believable that she had a thing for him from the beginning and was keeping those feelings on the back burner since he wasn't single.

...They're in deep. Like, real love stuff. Do you think Selena Gomez and The Weeknd are in actual love? OMG, MY HEART COULDN'T HANDLE IT IF I KNEW.

Basically, this song is the most romantic thing ever. While there were all sorts of rumors going around about what "Wolves" could be about (including an intimate look at Gomez's battle with lupus), I'm pleasantly surprised it's a love song.

We have the cover art and the lyrics — I'm ready for the actual song now. SO, SO SOON.

More like this
What Do BTS' "Film Out" Lyrics Mean In English? They're About A Past Relationship
By Michele Mendez
With 'Like Water,' Wendy Found Her Biggest Cheerleaders In Her Red Velvet Bandmates
By Michele Mendez
I Tried Singing While Running Like Miley Cyrus & OMG, My Lungs
By Rachel Varina
Stay up to date