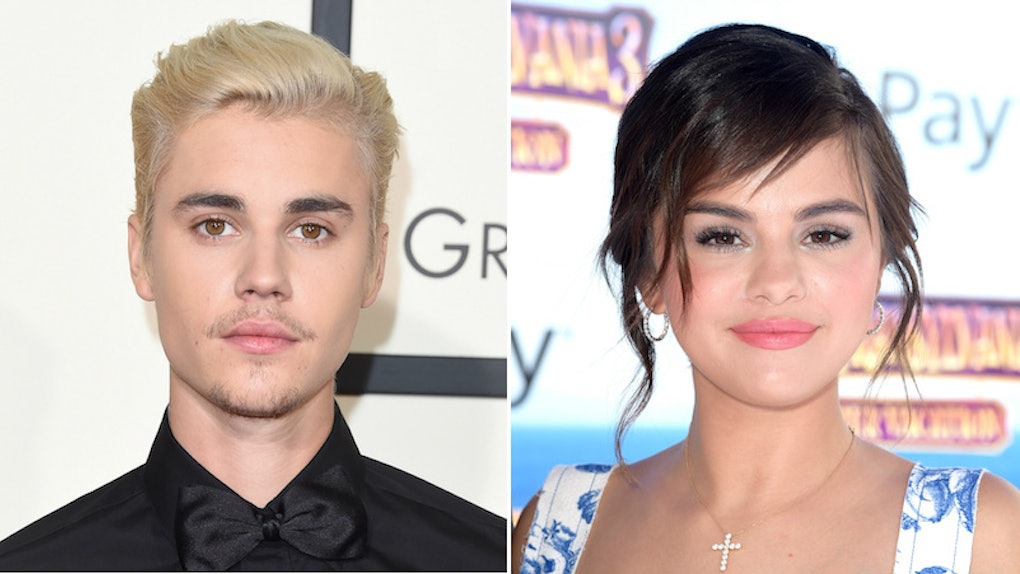 It looks like Justin Bieber and Hailey Baldwin might have finally sealed the deal on their on-again-off-again relationship. According to TMZ, the couple reportedly made their rumored relationship official and got engaged on July 7. If true, that leaves another on-again-off-again flame in the lurch, and I'm dying to know what she has to say about all this. But Selena Gomez's response to Justin Bieber and Hailey Baldwin's reported engagement is so unbothered, and it's kind of perfect.

Bieber reportedly popped the question to Baldwin on Saturday, July 7, while the pair were soaking up some sun in the Bahamas, according to sources who told TMZ they witnessed the whole thing go down. Baldwin reportedly said yes, and is now reportedly sporting an enormous rock on her left hand. Elite Daily reached out to representatives for both Baldwin and Bieber for comment, but did not immediately hear back.

But who cares about all that? What we really want to know is what Gomez has to say about the engagement — after all, last year we thought she was the one who'd be walking down the aisle. But it looks like she doesn't care at all about her ex's new love and is living her best life. On Sunday, July 8, shortly after the news of Baldwin and Bieber's reported engagement broke, Gomez's friend and assistant, Theresa Mingus, posted a photo to Instagram showing herself and Gomez kicking back on a yacht, just tanning on the dock with some refreshing-looking drinks, according to E! News.

There were a few other friends on board, and Mingus' Instagram stories also shared some other footage of the day cruising (and jumping into) the water around New York City (which made me extremely jealous, and I'd like an invite next time). In the photo, you can see Gomez taking in the sun looking chill AF.

Here take a look at all this IDGAF:

Meanwhile, everyone's over here freaking out over the engagement and the one person who matters (yes, she matters more than the couple) is clearly doing just fine. Better than fine, great. It's our own faults for holding out thinking she'd be the one.

Back in December a video surfaced that sent the rumor mill whirling with speculation that Bieber and Gomez were itching to get hitched. In the video, you can hear the paparazzi ask Bieber if he's going to propose to Gomez, "Justin, are you gonna propose to Selena Gomez? You guys make a really good couple. I see that smile!" Justin gave the biggest smile, which had fans really going wild, even though he didn't really confirm anything about the future of their relationship.

Who can really keep up with Gomez and Bieber. They were the couple teenage dreams are made of, and then broke up in 2012. A while later Gomez cuddled up with The Weeknd but they too called it quits in October, just in time for Bieber to warm his way back in. Almost immediately after her breakup, Jelena seemed to be back in full swing. Gomez and Bieber were spotted getting breakfast together, and even going to church together, but the fans were still on the hook until the couple through all discretion out the window and engaged in some PDA at one of Bieber's hockey games. Then in March they called it quits (againa) and I guess Baldwin swooped in.

Listen, I know it's tough, I also thought that Gomez and Bieber would end up together in the end. But this is real life, people and sometimes the rich and famous do what they want without consulting us civilians. Or maybe there's more to the story, will Bieber's engagement finally end the rollercoaster that was Jelena?

More like this
Selena Gomez's New Collarbone Cross Tattoo Has A Spiritual Meaning
By Sydney N. Sweeney
Justin Bieber's Quote About His First Year Of Marriage To Hailey Baldwin Is Unexpected
By Corinne Sullivan
Lil Huddy's "America's Sweetheart" Is About Charli D'Amelio, & He Admits It – EXCLUSIVE
By Brandy Robidoux
Stay up to date