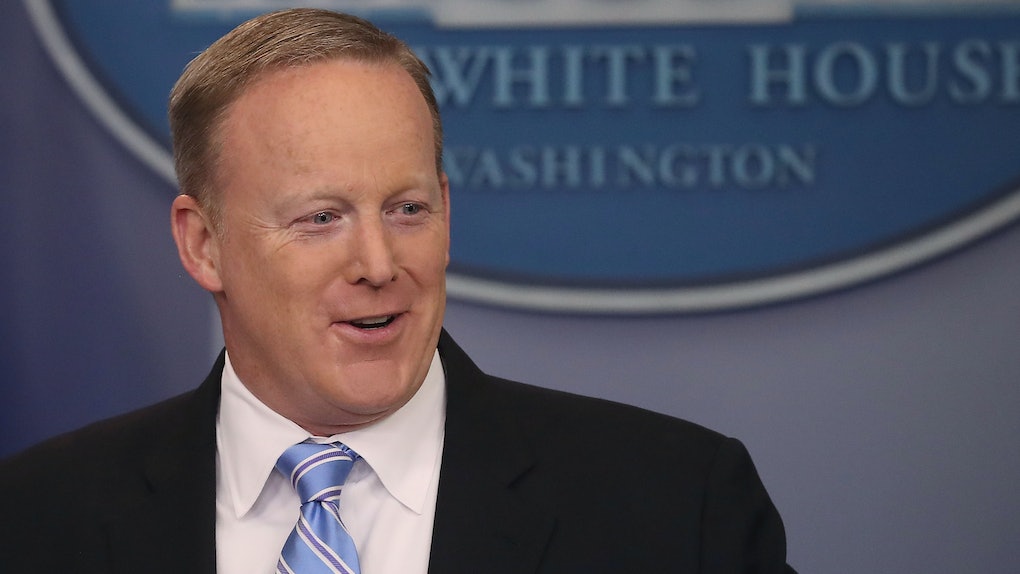 Months after his dramatic departure from the White House, President Donald Trump's former press secretary, Sean Spicer, says he's releasing a new book. The 46-year-old former spokesman made the announcement during the Monday night, Dec. 12, airing of Fox News' Hannity show. The title of Spicer's book is The Briefing, which is set for a release next summer, according to Politico.

"I've decided that it is incumbent on me to set the record straight," Spicer told host Sean Hannity on Monday night. "I looked back at the coverage of the campaign, the transition and the first six, seven months of this White House and realized that the stories that are being told are not an accurate represent [sic] of what President Trump went through to get the nomination, to transition to the White House and then his first six months in office."

Spicer told Hannity the book will focus on what he characterized as a "turbulent tenure" in the White House. In a separate interview, the former press secretary also said the book would "set the record straight" on his time within the Trump administration. "It was an honor to have a front row seat on the campaign, transition team and the first eight months of this historic presidency. I look forward to sharing my stories and setting the record straight," Spicer told the Washington Examiner in an interview published Monday.

Sean Spicer's tenure at the White House ended in July, when the former Republican National Committee staffer resigned from his post as press secretary following reports of President Trump hiring Anothony Scaramucci as White House communications director, a position above Spicer's. Spicer was strongly opposed to Scaramucci's hire, according to reporting from the New York Times. Ultimately, Scaramucci would only last 10 days at the White House, and was fired before his official tenure as communications director began. Spicer was succeeded by current White House Press Secretary Sarah Huckabee Sanders.

Despite the apparent politics inside the administration that led to Spicer's departure, the former spokesman says the book won't be focused on airing dirty laundry. "This isn’t about White House gossip," Spicer told the Washington Examiner. "I can tell you from first-hand experience of the rampant hostility President Trump faces daily from the mainstream press, and I want the American people to have an opportunity to hear the truth they won’t hear from mainstream media."

Before Scaramucci's hiring prompted his exit, Spicer's time as press secretary was marked by notable back-and-forth exchanges between himself and White House reporters over erroneous claims. The first of those claims came during Spicer's first press briefing, during which he asserted President Trump had the largest audience for a president inauguration, ever. Spicer would eventually say he regrets making the claim.

Spicer had also become a frequent subject of Saturday Night Live parodies, for which actress Melissa McCarthy portrayed the spokesman, and ended up parodying himself. During the latest Emmy Awards ceremony, the former press secretary was rolled out standing behind a podium before claiming, "This is the largest audience to witness the Emmys, period. Both in person and around the world." Now, his latest post-White House move involves releasing his book, which will be published by Regnery publishing, the company known for book deals with conservative personalities like Rush Limbaugh and Ann Coulter.

“Regnery is the perfect home for Sean Spicer to tell his story,” Marji Ross, president and publisher of Regnery, told the Washington Examiner. “Sean shares our mission to shine light on the stories the mainstream media won’t cover, and we are honored to partner with him on this project.”