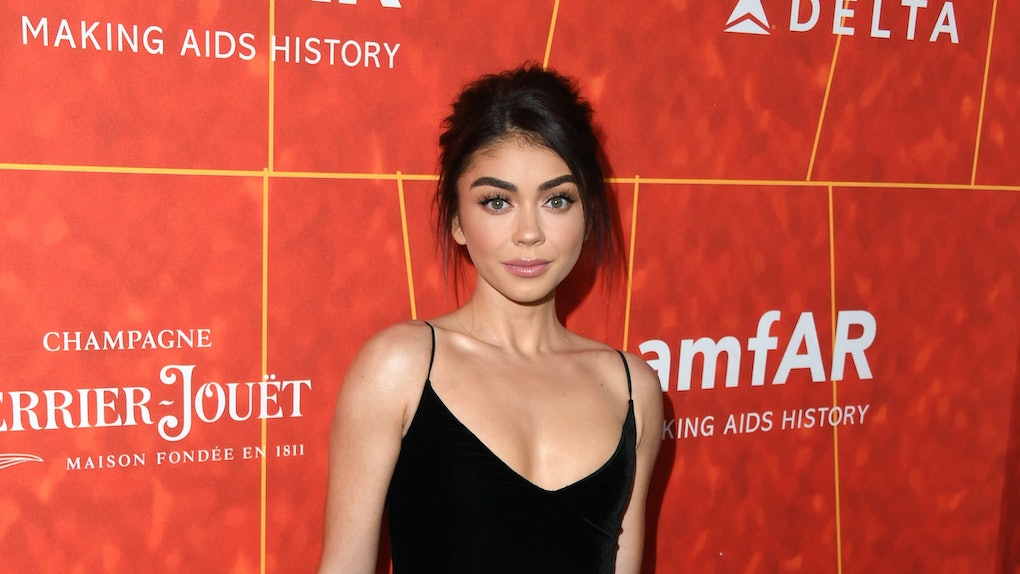 Your body is the number one thing nearest and dearest to you. It’s where you’ve grown up; where you first understood joy, where you first experienced heartache. It nurses you back to health when you’re sick, and cradles you when you cry. Your body typically works for you, not against you, but when your organs start to shut down, that relationship can become a complicated one. That’s difficult to deal with on your own, and I'd imagine it’s a thousand times more challenging to grapple with in the public eye. Modern Family’s Sarah Hyland opened up about her kidney transplants and her overall experience with chronic illness in a recent interview with SELF, in which she gracefully mapped out her entire medical journey from day one, to the present day. If you follow the actress on social media, or, at the very least, have read her candid captions and tweets about her experiences, the fraction of insight she’s offered up until now doesn't even begin to scratch the surface of the pain she revealed in her latest interview.

At just 28 years old, Hyland told SELF she’s undergone 16 surgeries as the result of a chronic illness she was born with, called kidney dysplasia. According to the National Institute of Diabetes and Digestive and Kidney Diseases (NIDDK), kidney dysplasia is when the kidneys of a fetus develop incorrectly inside the womb. Because of this, someone with kidney dysplasia can develop cysts on their kidney that disrupt the organ’s natural function, potentially leading to chronic UTIs, high blood pressure, swollen kidneys, kidney disease, and kidney failure. As per the NIDDK, kidney dysplasia affects roughly one in every 4,000 babies, and the condition is most likely genetic.

Hyland’s case of kidney dysplasia is so severe that, in 2012, the actress endured her first kidney transplant — a donation from her father. Unfortunately, though, by October 2016, Hyland’s body had started to reject the kidney, and, as per SELF, the then-25-year-old’s creatinine levels (aka waste that would normally be flushed out by your kidneys, the outlet explains) were considerably high. “We did all of these tests and all of these treatments to try and save the kidney,” Hyland told SELF. “Christmas break, New Year's, Thanksgiving, my birthday, all of that spent in the hospital.”

In February 2017, SELF reports, Hyland started dialysis treatments, which, according to the Mayo Clinic, are one of two main options patients face when experiencing end-stage kidney disease, aka when the kidneys can no longer keep up with the waste and fluid in your body. Dialysis treatments are meant to remove said waste and excess fluids from your bloodstream, the medical center explains. Hyland told SELF that the treatments required her to be hooked up to a machine through a port in her chest. The sessions lasted four hours each, she explained, and had to be done three times a week. As a result of the dialysis, Hyland said she lost a significant amount of weight, developed sciatica (severe lower back pain), experienced swelling in the face, and a spike in blood pressure that affected her vision.

Fast-forward to May 2017, and according to SELF, Hyland's doctors thought it would be best to remove the organ completely. In other words, Hyland had to endure a second kidney transplant. This time, the donation came from her brother, Ian, who was "ready and willing to donate an organ to his big sister," SELF reports. Hyland, on the other hand, had her reservations. She explained to SELF,

When a family member gives you a second chance at life, and it fails, it almost feels like it's your fault. It's not. But it does. For a long time, I was contemplating suicide, because I didn't want to fail my little brother like I failed my dad.

In September 2017, Hyland underwent her second kidney transplant, and fortunately, it was a success. Now, the actress told SELF, both she and her brother are doing well post-transplant — for the most part, at least. Hyland told the outlet that she's now battling endometriosis, which is a painful reproductive health condition, plus she developed an abdominal hernia, which is when "internal tissue pushes through [the] abdominal muscles," according to SELF. Hyland told the outlet that she's undergone surgeries for both of these conditions since the beginning of the year.

Needless to say, 2018 has been an uphill battle for the actress, but through it all, Hyland seems to have come out more grounded and compassionate than ever. She also continues to be candid about her experiences on social media as a way to help fight the stigma surrounding chronic illness. But above all, one of Hyland's intentions is to let her fans know they aren’t alone in their own struggles, and to let them know she is right there, going through it, too.

“It's really important to feel,” the actress shared with her fans through SELF. “There are times to swallow it and just continue working, but if you're home and if you're with your boyfriend, your girlfriend, your mom, your dog, your goldfish and you feel like crying, just cry.”

Think about how much strength it must take to go through hell and back. That’s nothing compared to Sarah Hyland’s physical and mental resilience, and what makes the actress even more of a role model is that, despite it all, she showed up. The majority of Hyland’s health issues has been kept under wraps until her interview with SELF; it was, for the most part it seems, something she dealt with behind the scenes. Yet, through her recovery periods and dialysis treatments, Hyland showed up to the Modern Family set to do her job; she found the driving force to find light, and make you laugh. She even continued to share snapshots of her life with fans over social media, despite criticism and judgments about her sudden weight loss. If that isn’t an example of perseverance, then I don’t know what is.

Hyland's interview with SELF gave fans a newfound perspective on the actress' life, her struggles, and how hard she's fought over the last several years. To celebrate and spread the word, Hyland posted the online magazine's cover photo on her Instagram, captioning the breathtaking picture with a love letter to fans that just might take your breath away. She wrote,

I say words here (link in bio) that hopefully others can relate to and feel like they’re not alone. Hopefully those that are lucky enough not to experience this will learn about something new and take a moment to appreciate their health. Thank you so much to all the love and light I have received today. I love you all <3