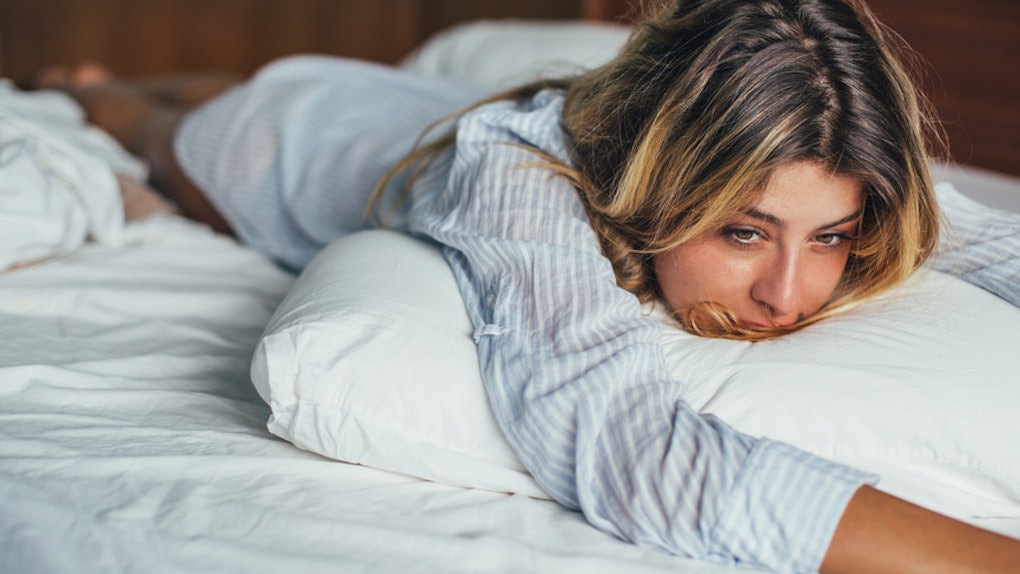 What Is Endometriosis Pain Like? 6 Difficult Realities You Face When Living With The Disorder

For those of you living without endometriosis, consider yourselves incredibly lucky. It can be hard to understand and empathize with the pain someone else endures, especially in the context of an affliction such as endometriosis, where women are often suffering in silence. To be fair, most people have no clue just how severely endometriosis can affect someone, let alone the pain it can cause. So just exactly what is endometriosis pain like?

To put it bluntly, living with the disorder can be absolutely awful. Endometriosis is the abnormal growth of endometrial tissue (the stuff that lines the uterus) in places outside of the uterus, such as the ovaries, the fallopian tubes, and the surface of the uterus. This leads to incredible sensitivity and pain for women that can last for the duration of a period, or can even be a source of constant pain. One in 10 women are afflicted with this painful disease (that's around 170 million women, BTW), although many estimate the number to be much higher due to misdiagnoses and repressed concerns.

Endometriosis, though not usually life-threatening, is an incredibly painful and largely undiscussed affliction, the pain of which is only increased by the levels of misunderstanding that surround it. Here are six realities of endometriosis that you face when living with the disorder.

1. You Probably Take A Few Days Off Every Month

This disease can be like having tens or hundreds of excruciatingly painful blisters covering the inside of the pelvis.

Although some women only experience this pain during their period, many can experience it nonstop. This inevitably interrupts one's professional and personal life to an exponential degree, especially when the pain is so great that you have to remain bedridden.

2. You May Have An Increased Risk Of Infertility

Women with stage four endometriosis commonly experience infertility as a result of their disease. Between 30 and 40 percent of women with endometriosis have trouble conceiving. The main reason for this is that cysts can grow out of the endometrial tissue and inhibit the process by which you conceive.

3. You Have Heavy, Long, And Overall Miserable Periods

The problem with saying "women with endometriosis experience crappy periods" is that it completely underrates the level of pain and misery that truly occurs.

Here's the reality: Women with endometriosis often experience periods that are more painful, yes, but their menstrual flows are also heavier and longer than the average period, as well. In addition to being bedridden by pelvic cramps, women with endometriosis can experience periods that last over six days, and their flows are often so heavy that they have to change tampons every one to two hours.

4. Sex (And Even Just Arousal) Is Painful

Even your orgasms can be painful when you have endometriosis, according to Tamer Seckin, MD, founder and medical director of the Endometriosis Foundation of America:

In early cases, intercourse just before your period is painful.

In advanced cases, sex is painful all the time.

5. Your Family And Friends Don't Understand

Because it is both a female-specific disease and an invisible one, endometriosis is often dismissed or downplayed to be much smaller than it truly is. Similar to fibromyalgia, it can take a while to diagnose the symptoms for what they are, instead of just individual instances of chronic pain.

What's more, since endometriosis is related to menstrual pain, women can often be convinced into thinking they're just being "dramatic," or that everyone experiences what they're going through. Lena Dunham, an outspoken endometriosis victim, spoke about the feelings of isolation and effort to conceal her illness in an essay for Lenny Letter:

A few days of every Girls season, I would come into work with that telltale stomach pain, nausea, and inability to move a muscle. The feeling of stopping a crew of 100 people from doing their jobs is far more stressful than missing Intro to Greek Drama class at a liberal-arts college, but I felt the same sense of hot shame. The kind of shame you feel as someone with an anxiety disorder that plays tricks on them. The kind of shame you feel as a woman showing weakness.

6. It Even Hurts When You Pee

If you have endometriosis, something as simple as peeing can be incredibly painful. This is one of the symptoms that should tip you off that it's not just painful cramps that you should "get over," despite what your family members or friends may unwittingly tell you.

Other symptoms to watch out for include long, heavy periods, hot flashes, chronic and severe fatigue, bloody urine, and diarrhea. If you're struggling with any of these symptoms yourself, be sure to consult with your doctor to get the best treatment possible for your body.