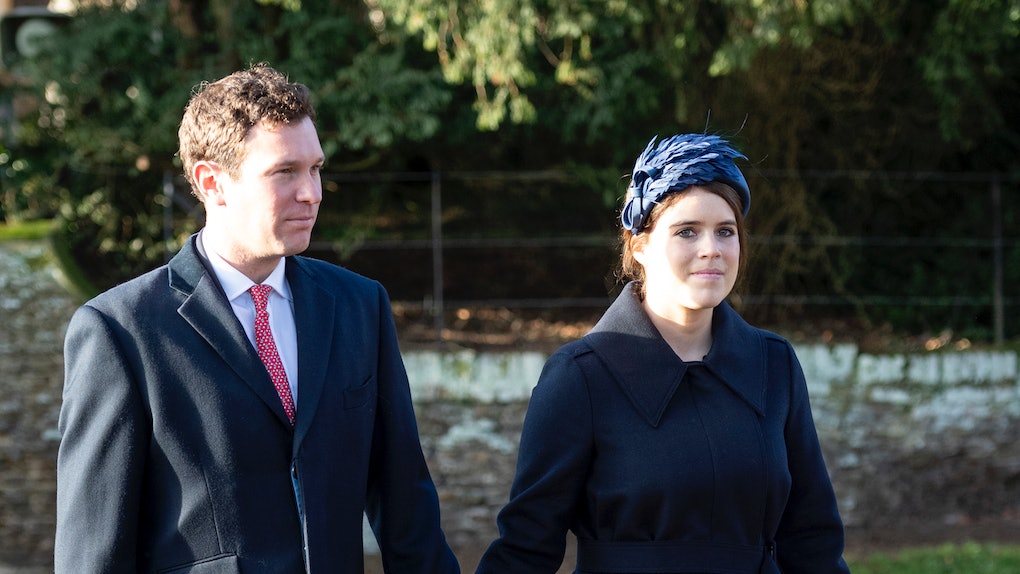 Princess Eugenie Is Pregnant & Her Announcement Is The Cutest Thing Ever

We may be in the middle of a global pandemic, but there's a silver lining to it all for Princess Eugenie of York and her husband, Jack Brooksbank: Princess Eugenie is pregnant with her first child! The couple announced the news on Sept. 25 with a photo on Instagram that might just make your heart burst.

In the photo posted to Princess Eugenie's account, you see Jack and Eugenie holding the most adorable pair of baby bear slippers. Eugenie's gorgeous engagement ring, which Jack gave to her back in January 2018, is front and center. If you swipe to the next photo in Eugenie's carousel, you'll see the princess and her husband beaming from ear to ear. The caption reads, "Jack and I are so excited for early 2021....👶🏻."

Along with the Instagram announcement, Buckingham Palace released a statement about the good news. "Her Royal Highness Princess Eugenie and Mr. Jack Brooksbank are very pleased to announce that they are expecting a baby in early 2021," the statement reads. "The Duke of York and Sarah, Duchess of York, Mr. and Mrs. George Brooksbank, The Queen and The Duke of Edinburgh are delighted with the news."

This is the first child for the couple, and it's also the first grandchild for Princess Eugenie's parents, Prince Andrew and Sarah Ferguson. As for the Queen, this will be her ninth great-grandchild. Her other great-grandchildren include Peter Phillips' two daughters, Savannah and Isla; Zara Tindall's two daughters, Mia and Lena; Prince William and Kate Middleton's three children, Prince George, Princess Charlotte, and Prince Louis; and of course Prince William and Meghan Markle's son, Archie.

The news of Princess Eugenie and Jack Brooksbank's baby on the way comes just a few weeks shy of their two-year wedding anniversary. The pair was wed back on Oct. 12, 2018, at St. George's Chapel at Windsor Castle, the same location Prince Harry and Meghan Markle said "I do" earlier that year on May 19.

As for the baby getting a royal title, it's looking like a no. Princess Eugenie is, of course, a princess (duh), but Jack Brooksbank doesn't hold a title. Apparently, titles don't make their way down the female line of the royal family. Therefore, their child probably won't get a title unless the Queen decides to give Brooksbank a title. Considering she didn't do that when the couple got married, I wouldn't hold your breath waiting for her to do it in the future.

Regardless, the Queen is "delighted" with the news of the couple's baby, and TBH, so am I. Congratulations, Eugenie and Jack!

More like this
These Tweets About BTS' McDonald's Meal Announcement Are Hype, But ARMYs Have 1 Question
By Brandy Robidoux
Princess Eugenie's Instagram Tribute To Prince Philip Recounts Their Sweet Bond
By Brandy Robidoux
Hailey Baldwin's Quotes About Homeschooling Reveal The 1 Thing She Missed Out On
By Sydney N. Sweeney
Stay up to date