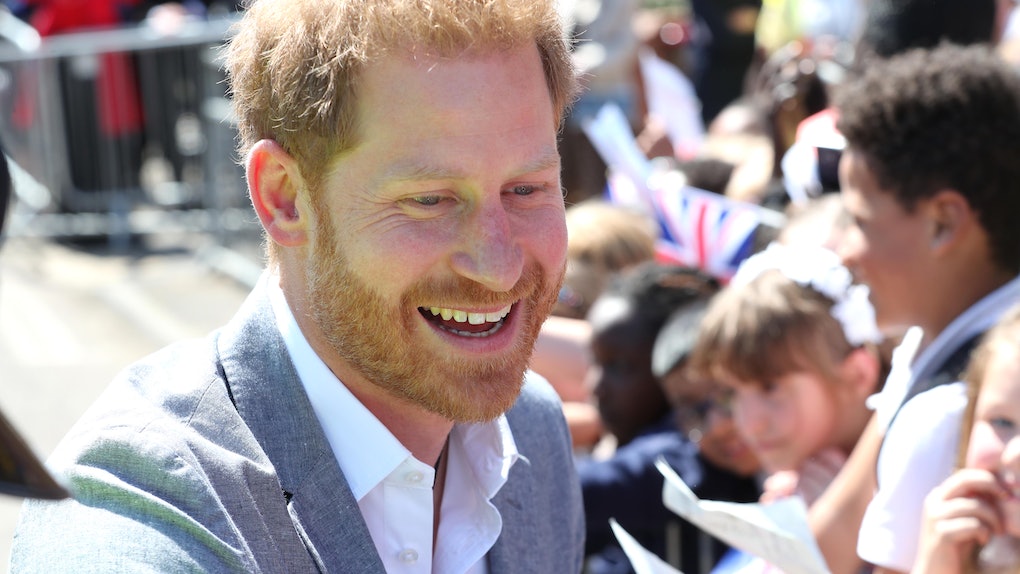 Prince Harry's Update About Parenting Baby Archie Is So, So Heartwarming

Prince Harry is out here living his best-dad life. The Duke of Sussex recently welcomed his first child, Archie, and basically hasn't stopped smiling ever since. The little royal bundle of joy arrived on May 6 and the U.K. has been throwing one epic birthday party ever since. In my personal opinion, it seems like Prince Harry has barely been keeping his chill together whenever it's time to talk about his baby. That man can hardly contain his excitement. Prince Harry's update about parenting Archie is just the latest example of what I mean, and it'll make you swoon over him so hard (as if you needed more reasons to adore this literal prince).

If you do a little research, it's not hard to find old videos of Prince Harry talking about becoming a father one day. From where I'm standing, Meghan has remained the source of never-ending calm and poise, while Prince Harry's low-key been bouncing off the walls over his growing family. If you think about it, his life has done a full 180-degree turn in the past year and a half. Engagement, marriage, and a baby are big F-ing deals for the average person, let alone someone in his ~royal~ position.

When it came time to announce Archie's arrival, a beaming Prince Harry stood in front of horse stables and gushed about how his son's birth was straight-up the most amazing experience of his life. (Must be nice to be a dad, amirite?) Meghan delivered their son in private and made her first appearance two days later when she, Prince Harry, and Archie had their first official family photoshoot.

One week after Archie's arrival, Prince Harry was back to his royal-engagement grind as he visited Oxford's Children's Hospital on Tuesday, May 14. While he was there, he met a woman named Ida Scullard. According to E!, her 3-year-old son, Emmett, was diagnosed with testicular cancer a year prior and is now in remission. When Ms. Scullard met Prince Harry, she was also holding her 10-week-old daughter.

"Harry asked me if she was over the stormy period as babies are supposed to be grumpy for the first 10 weeks — and she is," Scullard explained. "He said he's getting used to the baby now and how Archie has fitted into family life. He said he just feels part of the family and he can't imagine life without his son."

All together now: Awww!

The Daily Mail also reports Prince Harry "hinted" he might be suffering from a serious lack of sleep, which is basically the one detail I've heard my whole life about having a newborn. Fortunately, it sounds like Meghan and Harry lucked out with Archie's temperament otherwise. During their photoshoot, Meghan told reporters Archie has "the sweetest temperament" and is "really calm." Prince Harry added, "Parenting is amazing. It’s only been two and a half days, but we’re just so thrilled to have our own little bundle of joy."

Looking good, Dad. The world is surely continuing to send you and Meghan so much love and hopefully a few good cat naps here and there, too.

More like this
Prince Harry's Instagram Tribute To Prince Philip Comes Straight From The Heart
By Michele Mendez
Meghan Markle & Prince Harry's Beef With The British Tabloids, Explained
By Brandy Robidoux
Meghan & Harry's Statement About Prince Philip's Death Is Simple, But Moving
By Sydney N. Sweeney
Stay up to date