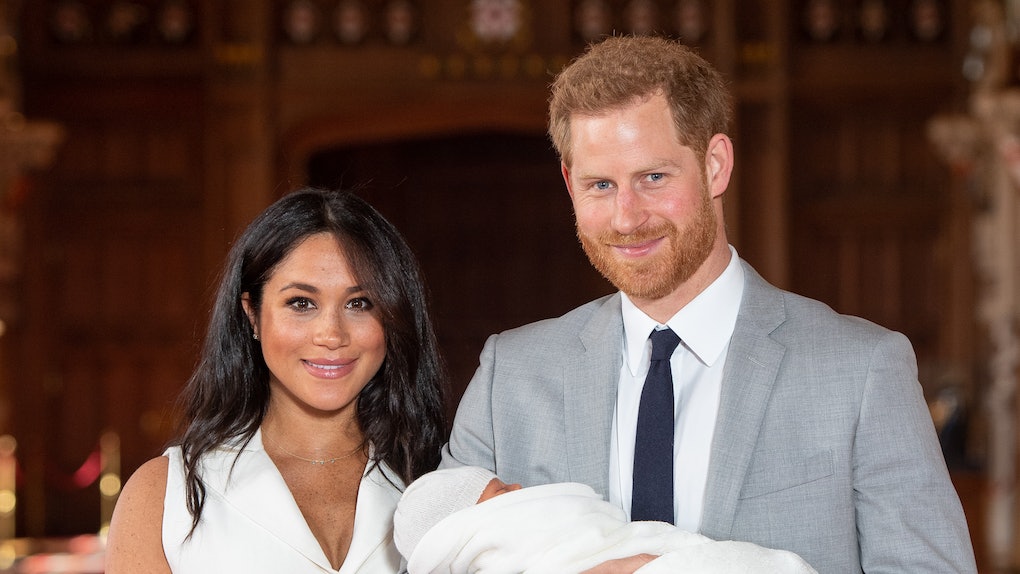 Ever since Prince Harry became a father this year, royals fans have been doting on his newborn son, Archie. I can't blame them, since the 4-month-old is simply adorable. Thankfully, Prince Harry is always up for sharing tidbits about his son to the public, proving he truly is a man of the people. Prince Harry's new update on Archie is a total proud-dad moment.

A new video posted on an Instagram fan account captures Prince Harry visiting the Rugby Football Union All Schools program at Lealands High School in Luton recently. A student who attended the visit asked the Duke of Sussex, "Prince Harry, how is everything going with Archie?" Ever the proud poppa, Prince Harry responded with a welcome update on his son: "He's really well, thank you. And he is getting so big."

It sounds like both Prince Harry and his wife, Meghan Markle, are gushing about their new child. Markle was recently spotted stepping out for her first work engagement since the birth of her son. After giving a speech, Markle explained that she had to "get back to the baby, it's feed time."

Check out Prince Harry's brief update on baby Archie in the video clip below.

It's hard to believe it has already been four months since Archie was born on May 6. Since Prince Harry and Markle kept their birth plans private, fans were left to speculate when exactly the pair would become parents, so it was a massive event internationally when the royal family announced that Markle had given birth to a son this summer. Shortly afterwards, fans learned the child's full name was Archie Harrison Mountbatten-Windsor.

Since Archie's birth, both Harry and Meghan have mostly spent their time in private with their newborn son, so superfans of the royals have not gotten to see or learn much about Archie just yet. That is why the little updates like the one that Prince Harry just dropped are so exciting. The only other real details that we know about Archie actually came from Ellen DeGeneres last week. The comedian revealed on her daytime talk show that she recently met with Prince Harry and Meghan Markle, which included the opportunity to hold and feed Archie. DeGeneres did not say too much about Archie, but did note that he "looks just like Harry" and already has a good amount of hair on his head. Like father, like son, it seems!

While Harry, Meghan, and Archie have largely stayed out of the public eye for the past few months, royals fans can expect to see more of them very soon. Meghan Markle notably hopped on a plane to New York last week to cheer on her friend Serena Williams at the U.S. Open, and later this month, Meghan and Archie are going to join Harry in South Africa for the family's first official royal tour in Africa.

So, hopefully, fans can expect to see some absolutely adorably photos of Archie exploring Africa with his parents in the near future. Until then, Prince Harry's proud updates about how big his son has gotten will have to suffice.