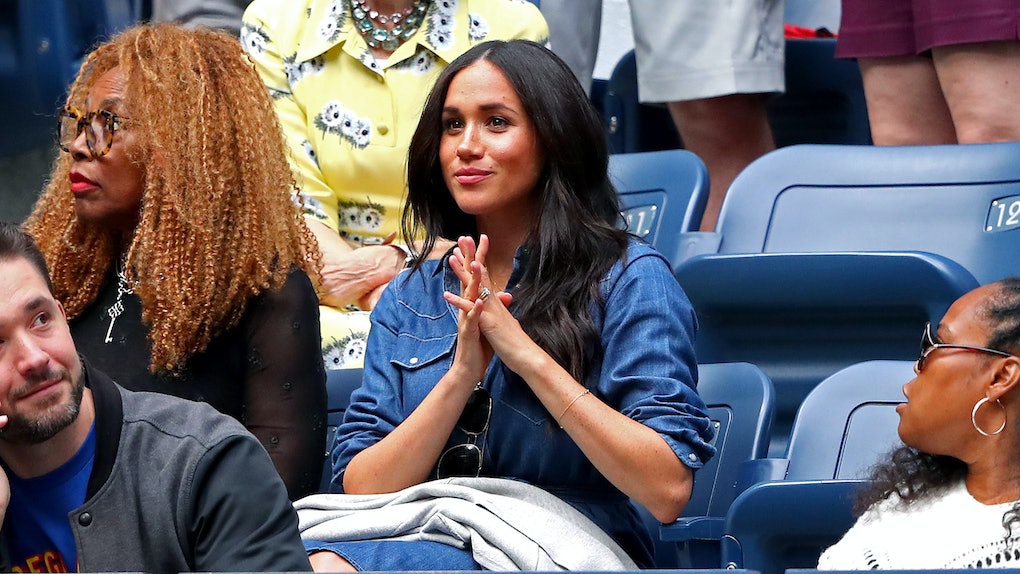 These Photos Of Meghan Markle Cheering On Serena Williams At The U.S. Open Are Everything

On Saturday, Sept. 7, Meghan Markle made a rare public appearance to cheer on one of her closest friends courtside. The Duchess of Sussex, who's an avid tennis fan, is currently visiting New York for the U.S. Open, and she was in the stands as Serena Williams faced off against Bianca Andreescu in the final of the tennis tournament. Luckily, there's plenty of footage from the event, and these photos of Meghan Markle cheering on Serena Williams at the U.S. Open show their friendship hasn't changed while she's been across the pond.

The duchess' latest outing is significant, because it marks the first time she's gone overseas solo since the birth of her son, Archie. Per People, on Friday, Sept. 6, the mom-of-one reportedly caught a last-minute flight out of London to the Big Apple, where Williams was scheduled to face off against fellow tennis titan Andreescu in the U.S. Open. One day later, she was seen sitting in Williams' box alongside fellow public figures like Anna Wintour (whom she was photographed chatting with at one point) and the tennis star's husband Alexis Ohanian.

A source told The Sunday Times that the weekend getaway was planned on a whim. "It is a last-minute trip," the insider told the publication. "Excited to support her friend, and then come back." She reportedly didn't bring her staff, and Prince Harry is taking care of baby Archie back at home.

Unfortunately, Williams ended up losing the game and the title, which would have been her first Grand Slam since giving birth. However, she had a loyal supporter in Markle, who couldn't contain her enthusiasm while cheering on her friend during the big match.

While Markle has stayed largely out of the limelight since welcoming Archie, she's made a few exceptions for her BFF. Back in July, she headed to the Wimbledon championships to catch her friend's match before accompanying sister-in-law Kate Middleton to watch the women's final.

Williams has previously spoken out about their friendship and proven that she has Markle's back when it comes to any negative press about her. Back in December, the tennis superstar shut down a reporter after she was asked about "criticism" directed at the royal shortly after winning the semi-finals.

"I didn't know there was negative media out there, any time I see her name attached to anything I don't read it," she told reporters at the post-match press conference.

While Williams didn't entertain rumors about the Duchess of Sussex, she did share some details about their relationship.

"She couldn't be a better friend to me," she revealed. "Low moments, high moments, she's always there and that's all I want to be to her."

A few months later in July, Williams echoed her earlier statements during another press conference, telling reporters, "She’s such a great friend and a great person as well. And always positive, no matter what."

While Markle is expected to be jetting back across the pond on Sunday, her flying all the way to New York just to see Williams' match shows that, despite an ocean dividing them, their friendship is stronger than ever.

More like this
Here's Why Meghan Markle Reportedly Isn't Attending Prince Philip's Funeral
By Cianna Garrison
Meghan Markle & Prince Harry's Beef With The British Tabloids, Explained
By Brandy Robidoux
Prince Philip, The Duke of Edinburgh, Has Died At The Age Of 99
By Noelle Devoe
Stay up to date