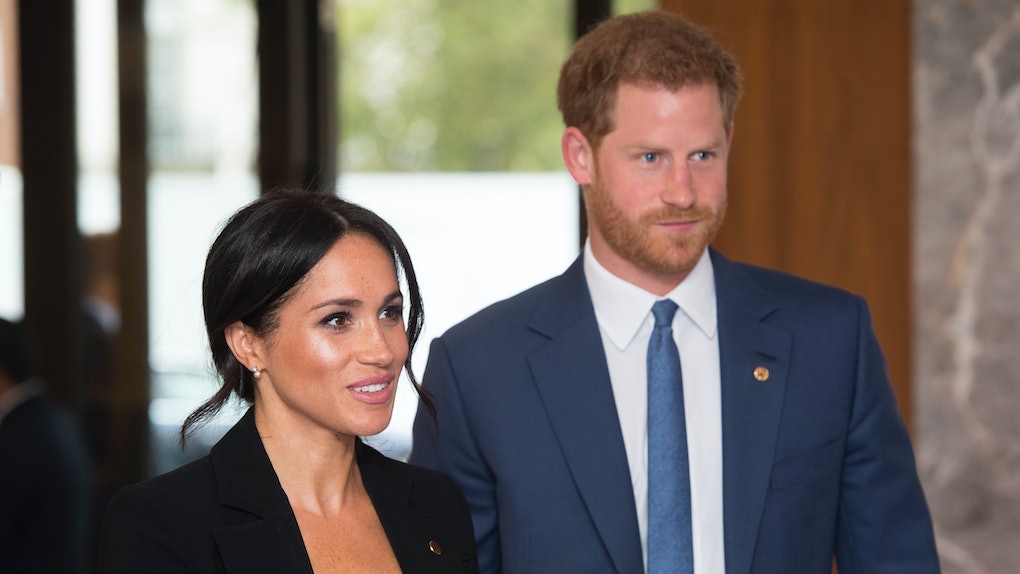 There’s nothing like a run-in with your ex to throw an awkward wrench in your romantic getaway. Apparently, even the royals aren’t immune to these unfortunate coincidences, either: Prince Harry and ex Jenna Coleman ran into each other at the opening of Soho House Amsterdam last weekend, and unsurprisingly, it was awkward AF. It all went down while Harry and Meghan Markle were celebrating the launch of the exclusive club's newest location with founder Nick Jones and a slew of other A-listers, including comedian Michael McIntyre, model Lily Cole, actors Stanley Tucci and Simon Pegg — and none other than actress and model Jenna Coleman, one of Harry’s former flames.

It’s the age-old question: What should you do when you spot an ex at an event? Do you avoid eye contact, or attempt to make small talk? Apparently, Prince Harry went the former route. An eyewitness told Vanity Fair that Harry essentially ignored her.

“Harry had to walk straight past Jenna to get to his and Meghan’s table,” said the source. “It was pretty awkward and some of the other guests were commenting on it.”

Guys. The cringe factor doesn’t end there. Coleman was there with her boyfriend and fellow Victoria co-star Tom Hughes — who was pursuing Coleman at the exact same time as Harry back in 2015. Harry reportedly blushed when he spotted her, but just kept walking. Still, at least Meghan handled herself with poise and grace, despite the uncomfortable scenario (would you expect anything less?).

“Jenna looked down while Harry looked straight ahead, while Meghan didn’t seem to notice,” the onlooker told Vanity Fair. “She sat through breakfast with a smile on her face, but Harry looked a bit uncomfortable. He’d been super friendly saying hi to everyone, but he didn’t even acknowledge Jenna.”

Just a quick refresher: Coleman met the prince at an Audi polo match in 2015, and before long, was being wooed by both Harry and Hughes simultaneously. A friend of the actress told Vanity Fair that Coleman had texts and date requests coming in from both of them at the same time. While Coleman ended up pursuing a relationship with Hughes, Harry met Markle about a year later on a blind date in July 2016. So, it all seems to have worked out exactly how it was supposed to. Besides, a source told Us Weekly that Harry and Coleman’s relationship was pretty casual. "They'll never be anything serious because of their schedules," they said. "He's off to South Africa and she's going to be filming Doctor Who in the States. But for now, they're just enjoying each other's company." A year later, Harry and Markle met through a mutual friend and, well — the rest is history, as they say.

Speaking of their first date, Harry and Markle actually met at the London Soho House’s private dining room on theirs — which undoubtedly made this celebration a meaningful one for the couple. Not only that, but Meghan also reportedly hosted her bridal shower at Soho Farmhouse outside of London, a go-to date-night spot for her and the prince. So awkward run-in aside, it’s safe to say that the Duke and Dutchess of Sussex still had a memorable stay at the Soho House Amsterdam. Besides, the weekend included lavish dinners and brunches, as well as a romantic boat trip down the city’s canals. In addition to dining on lobster spaghetti and tiramisu, guests were treated to some pampering at the Soho House’s Cowshed spa, according to the Evening Standard.

Running into your ex is brutal enough — but being under scrutiny while you’re faced with this uncomfortable scenario has to make it even worse. Still, Harry and Meghan managed to survive the unfortunate situation to enjoy the rest of their Soho House stay. So next time you spot your ex at a party, consider: WWHD (What Would Harry Do)? Look straight ahead, do not acknowledge, and keep your head held high. Stars – they’re just like us!