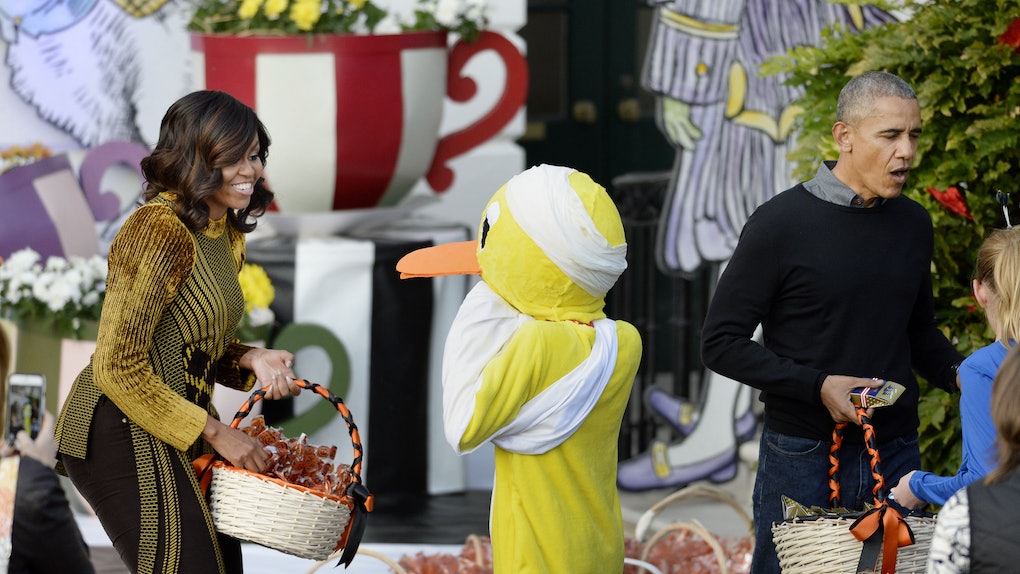 Photos Of The Obamas' Halloween Parties Are Bringing The Feels

If I wasn't already struggling through a bout of crippling nostalgia this season thanks to the fact that I'm no longer on the receiving end of trick-or-treating, these old photos of the Obamas' Halloween parties are just too much to handle. There were some touching moments from President Donald Trump greeting dressed-up children at his first White House Halloween on Monday, Oct. 30. But let's be honest, it was nothing compared to these gems.

On Tuesday, Oct. 31, the president tweeted out his well-wishes to Halloween-goers this year. And based on the photos of the Trump's White House Halloween party Monday night, which catered to some 6,000 children, the decorations were pretty impressive. Per the Washington Post, White House trick-or-treaters scooped up gift bags with homemade cookies, presidential M&Ms, and more. (Though for the children's sake, I hope they netted a lot more than that in this year's candy haul.) It wasn't a bad start for POTUS and the crew.

But it came at a horrible time for the White House. On Monday, Washington was upended with news that the investigation into Russian meddling in the 2016 election and any connections with the Trump campaign has already yielded two indictments and one guilty plea. Twitter users were not about to let Trump off the hook one day later. (Some even commented on Trump's Halloween tweet with a copy of the court files released by the Justice Department indicting members of his campaign staff.)

And things were only more awkward for the president when he had a photo op in the Oval Office with the children of press corps reporters. Aside from telling one child they had "no weight problems, that's the good news," repeatedly calling the children beautiful, making not-so-veiled barbs against the press, and clearly intimidating a Japanese child, the whole interaction was just cringe-worthy.

So people were understandably missing the days when Halloween was a fun affair for children and their parents visiting the White House, as well as for those watching the festivities from afar.

And in all fairness, Trump has a lot to live up to, given how fun his predecessor's eight Halloweens in the White House looked.

The photos are enough to make us all want to go trick-or-treating again no matter how old we are.

And in the larger scheme of things, seeing two parents genuinely enjoying the presence of happy, excited children is the boost we all need.

Obama never failed to get excited with the gaggles of children dressed up at the White House.

It didn't take long for the photos to start getting to people, and a wave of nostalgia apparently set in.

People on Twitter were having all the feelings over the realization that 2016 was the Obamas' last Halloween at 1600 Pennsylvania Ave.

Seriously, it's like the guy never takes a bad photo.

Michelle Obama's holiday spirit is not to be overlooked, either.

On multiple years, the former FLOTUS went all out with her costumes.

Others were less nostalgic and more focused on the present, showing a stark contrast between past Halloweens and now.

One Twitter user called out the fact that the climate of 2017 is lightyears away from what it was during Obama's tenure.

But despairers can be uplifted by the next generation. (This kid has my vote for sure.)

Whether you're dressing up and going for Halloween or staying in to hand out candy to trick-or-treaters, I think we can all agree Mini Obama beats us all.

If you need something else to smile at, this photo of Melania Trump's reaction to an inflatable dinosaur is so hilarious it almost makes up for the fact that her outfit is the diametric opposite of fun.

If the photos aren't cutting it, you can always relive the magic of the Obamas dancing to "Thriller" last year. You're welcome.