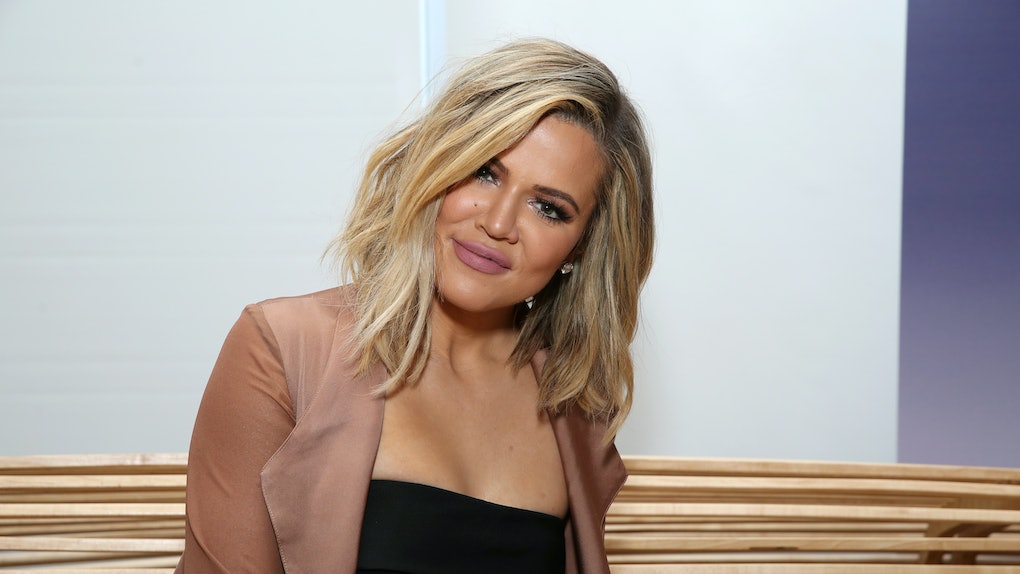 Is it just me, or does it seem like Khloé Kardashian has been maybe-pregnant for way longer than nine months? Technically, the pregnancy rumors broke in September 2017, but that feels like a different life time ago. Photos of Khloé Kardashian's "baby bump" at LAX Airport have fans convinced that this time, it's for real.

Ever since we first heard the Revenge Body star might be expecting, it's been one giant fan-hunt (see what I did there?) to see who could spot the baby bump first. KoKo has become an expert at throwing us off the scent, regularly posting pictures in a variety of outfits that could or could not be concealing a wee-little baby bump.

For example, in October, she shared some bare-midriff pictures with her boyfriend, Tristan Thompson, while they dressed up as characters from Game Of Thrones for Halloween. Later in November, she rocked a blue wrap dress to her sister Kim's baby shower, which also had a very busy pattern and looked like it was made of a heavier material.

Despite these confusing pics, Kardashian has mostly been covering up more and more, and wearing lots of long, flowing robes and coats and pairing them with baggy T-shirts. Take the latest LAX photos as exhibit A.

In the pictures, Kardashian is wearing black leggings, an oversized sweatshirt, and very suspiciously carrying a giant green purse right in front of her torso.

Sure looks like a baby bump disguise to me.

Kardashian has also been extremely vocal about wanting children of her own in past seasons of Keeping Up With The Kardashians, and it seems like Thompson is her perfect soulmate to co-parent with. A source previously revealed to People,

This is something Khloé has wanted for years and years and yet it’s more than that: she didn’t want it unless she was in the right relationship for it. She never let it happen with Lamar, intentionally, and she never considered it with James or French or anyone else she has seen.

But this is such a wonderful moment for her: not only is she going to be a mother, she is going to be raising a child with a man she truly loves. Everyone is over the moon for them both.

To be honest, Thompson does seem to have something special about him. From the outside looking in, he comes off as slightly more down to earth and supportive than Lamar Odom and French Montana ever were.

Kardashian even admitted that if it were up to Thompson, he would have a bunch of kids with her. During the Season 13 finale of KUWTK, she said,

It is a big step! But we are so excited!

Of course, we know big sis Kim has her third baby on the way via surrogate, making this large family extra large in just a few months.