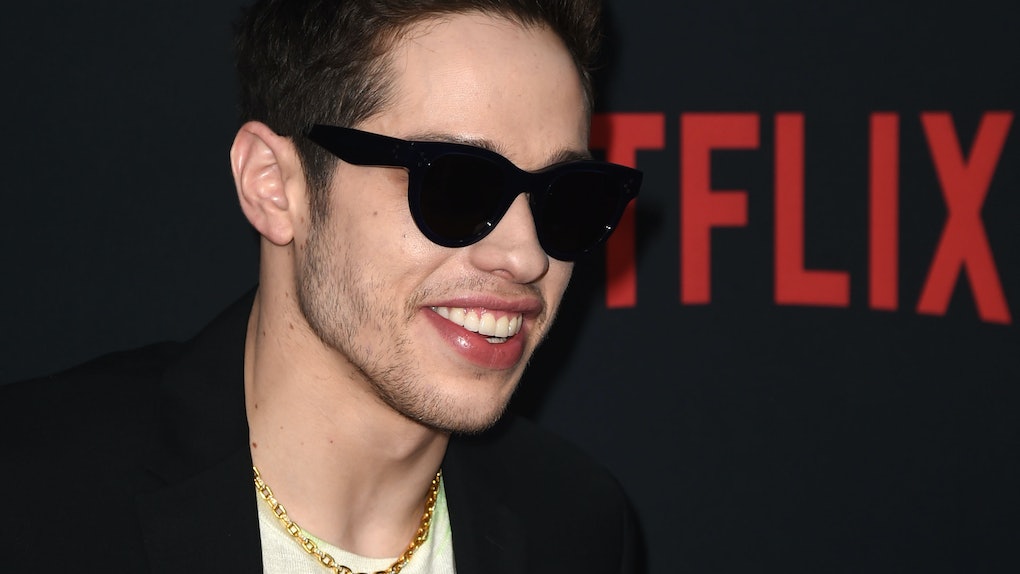 People didn't coin the term "big d*ck energy" for him for nothing. In his most recent display of BDE, Pete Davidson left a comedy show at Stress Factory after he felt his exes were disrespected. Here's what went down: Davidson was scheduled to perform at the Stress Factory Comedy Club in Bridgeport, Connecticut, on Monday, April 29. But things didn't quite go according to plan. Davidson wound up bouncing and skipping the performance all-together after he claimed he was "disrespected" by Vinnie Brand, the club's owner.

Davidson took to his Instagram to apologize to his fans for bailing and explain what went down. "Hey guys in Connecticut I’m sorry that we had to leave the show before I got to go on," he said in his Instagram story. "The owner, Vinnie Brand, disrespected me and did something that I told him not to do and I can’t perform under those circumstances."

How did Brand disrespect him, you ask? Well, according to Us Weekly, Brand decided to make an unnecessary joke about Davidson's exes, Kate Beckinsale and Ariana Grande, and the 25-year-old Saturday Night Live star was not here for it.

A source told Us Weekly that Brand reportedly "went out on stage," even though Davidson had specifically asked him not to because, according to an insider who spoke to Us Weekly, he already had an opener and did not want to make the crowd wait any longer. Once Brand was on stage, things reportedly only got worse. Brand, "in an obvious attempt to embarrass Pete, sarcastically said, ‘Don’t ask any questions about his exes Ariana Grande or Kate Beckinsale.’”

Davidson wasn't just going to sit back and take the blatant disrespect. “Pete was not about to to let this guy ruin his show, disrespect him and abuse the names of women Pete respects and cares about," the source told Us Weekly. Pete has been doing great. He’s happy and has been really enjoying traveling and doing shows. It’s sad that people like this club owner would pull a stunt like this just to bring attention to himself and his club.”

In fact, according to a second source, it was the moment when Brand started talking about Davidson's exes that Davidson decided to leave. Brand reportedly “wouldn’t get off stage, and once he made fun of Pete’s dating life, Pete left.” The source also added to Us Weekly that, “Pete didn’t feel safe in a place owned by someone who would be so disrespectful and dishonest."

Many fans were totally understanding of Davidson's decision to leave. Many even took to Twitter to express their support. “The club owner was super disrespectful by mentioning Pete’s exes by name in his intro after pete *specifically told him not to,* so ofc Pete left before doing his set, he can’t be taking that treatment from an irrelevant lowlife," one wrote.

"Yo the owner of the Stress Factory CT was wild, uncalled for and disrespectful to Pete so I don’t blame him for bouncing, I would’ve too," wrote another.

Luckily, Davidson had his fans in mind and was quick to reassure them that there would be another show coming soon. In the story following his explanation, Davidson promised to make it up to his fans. "However, everybody who got tickets to that show, I am doing a free show for you guys," he said. "We’ll figure out where it’s gonna be in the next week and we’ll get it all sorted out. Sorry again. This is not your fault. Later."

For those of you who missed the memo on what Davidson's relationships with the two female stars, let me give you a little refresher. Davidson was briefly engaged to Grande for four months before they called things off in October of 2018 and Grande famously hinted that he has a huge wiener in her "thank u, next" video.

Beckinsale and Davidson were linked together after reportedly being spotted flirting it up at a Golden Globes after-party. They just recently reportedly called things off earlier this month. “They are still spending time together but it’s less serious: more friendly of a vibe and less romantic," an insider told Us Weekly.

It's great to see that Davidson obviously still respects both of his exes. Classic BDE!